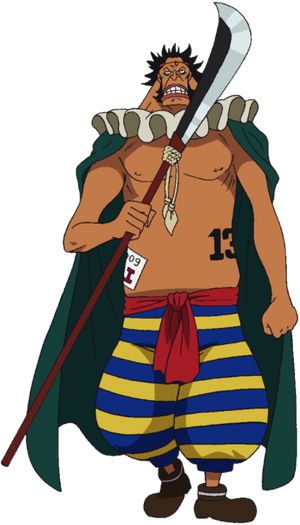 Sai, also known as Don Sai, is a member of the Chinjao Family and the 13th leader of the Happo Navy. He is also a martial artist who joined as a gladiator at the Corrida Colosseum to compete for the Mera Mera no Mi. He is the 3rd division commander of the Straw Hat Grand Fleet.

Durability: Small City level+ (Was unscathed after a lengthy fight against Baby 5, and could tank hits from Ideo. Survived a Gear 2 kick from Luffy which sent him flying out of the coliseum ring) | At least Small City level+, likely higher (Withstood an attack from Pica that was intended to kill Baby 5 and walked away just fine. Deflected a blow from Chinjao.)

Range: Extended melee range with his weapon and shockwaves.

As the 13th head of the Happo Navy, Sai has been trained extensively in the Hasshoken style. Upon successfully bending his grandfather and predecessor's legendary drill-shaped head with his own technique, Chinjao comes to recognize Sai has awakened his true powers and bestows him the true secrets of the Hasshoken technique. His usage of the style is focused on his leg, which has inherited the ultimate technique.

Key: Base | With the Hasshoken power

Start a Discussion Discussions about Sai (One Piece)