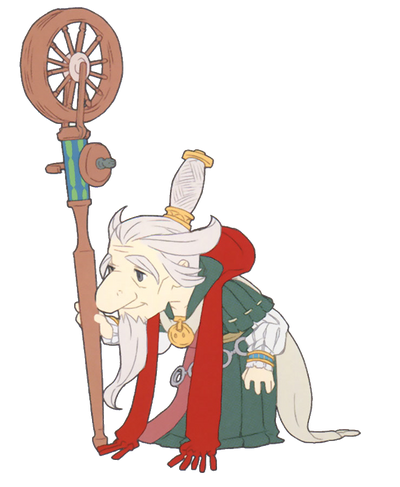 Sage Yulyana is a lecherous old tailor the heroes find in the Yulyana Woods who provides a new Vestal Garb for Agnes after her previous one was destroyed in the attack on the Wind Temple. But while freeing the group after they were captured by Eternian High Command, Yulyana is revealed to be a member of Eternia's ruling Council of Six. In the alternate versions of Luxendarc where the group meet versions of Yulyana who aid them in various ways, they learn the sage was originally an inquisitor of the Crystal Orthodoxy and nemesis of Lester DeRosso before learning of Airy's true nature and of her master Ouroboros.

As revealed in Bravely Second, the event occurring an almost two years after the events of Bravely Default, Yulyana met his end facing one of the Ba'al that first appear on Luxendarc.

Attack Potency: At least Large Mountain level (He and DeRosso leveled entire mountain ranges and opened ravines during their clashes), likely higher (can easily enter the Infernal Realm to save the heroes, should remain on par with DeRosso despite his age, can quadruple his stats with summons)

Speed: At least Massively Hypersonic+ (Around Mach 1000-1200; on par with the Warriors of Light who scale to Magnolia Arch, can dodge the attacks of Lester DeRosso which includes massive storms of cloud to ground lightning, can quadruple his stats with summons)

Striking Strength: At least Large Mountain Class, likely higher (On par with DeRosso who can affect Ouroboros, can quadruple his stats with his summons)

Durability: At least Large Mountain level (Took attacks from both DeRosso and the Warriors of Light in the past, can quadruple his stats with summons)

Range: Extended melee range with weaponry, Several hundred kilometers with magic (has leveled entire mountain ranges in the past)

Standard Equipment: A staff and the Conjurer Asterisk.

Intelligence: Almost as old as DeRosso himself and nearly as wise, Yulyana is a genius in the magic arts since he developed the Asterisk system that the Jobmasters use to gain their powers. As a result, he can easily tinker with so-called "unbreakable" barriers like those created during a battle with an Asterisk Holder and can infiltrate nearly any facility or space, including Ouroboros' Infernal Realm. Despite his age he is also a master close-quarter combatant, having no deficiencies with any weapon available to him and often attacks with the heavily physically-based move sets of the Pirate class. He has also instructed the vestals for generations and was the personal mentor to Mephilia Venus, a fellow summoner, and Asterisk Holder.

Weaknesses: Is something of a pervert and doesn't always take things seriously.

Retrieved from "https://vsbattles.fandom.com/wiki/Sage_Yulyana?oldid=4123844"
Community content is available under CC-BY-SA unless otherwise noted.