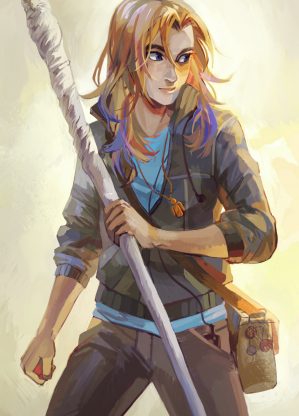 Sadie Kane is the hostess of Isis the goddess of magic, and she is one of the most powerful magicians in the world, along with her older brother Carter Kane, and their uncle Amos Kane. She lived in Longon as a normal teenager, under the protection of the goddess Bast, until the day her father summon the Egyptian Gods and became Osiris himself, opening her eyes to the world of gods and monsters, since then, she and Carter are trying to stop Apophis from destroying the world.

Classification: Magician, Eye of Isis, Leader of the Twenty-First Nome

Attack Potency: At most Island level (Comparable to her brother Carter, but physically weaker) | Continent level (Fought Set when he had the Red Pyramid.)

Lifting Strength: At most Class E | At least Class E

Durability: Likely at most Island level (Survived being near Apophis's prison where according to Menshikov "No human could survive", however is physically less durable than Carter) | Continent level

Stamina: Very high. Can cast magic, tangle with demons, and etcetera, even when low on reserves.

Range: Extended Melee Range. Planetary with some spells. Multi Universal with the Duat.

Standart Equipment: A staff and a Wand

Intelligence: Sadie is a genius at reading hieroglyphs, rendering her capable of performing complex spells such as the spells from the Book of overcoming Set, she is also very trusted in manipulating incredibly powerful artifacts, such as Feather of Truth and The book of Ra. Sadie has also demonstrated a great intuition and intelligence, as when she discovered that Apophis was the real threat to the world, and when she discovered Khnum's real name.

Weakness: Sadie isn't very experienced in physical combat, prefering to fight at distance. As a human, Sadie's magic is limited, Isis helps supply a good portion of her power, however, going well over her limit without Isis's aid can cause her to quite literally burn up.

Retrieved from "https://vsbattles.fandom.com/wiki/Sadie_Kane?oldid=4254290"
Community content is available under CC-BY-SA unless otherwise noted.