VS Battles Wiki
Register
Don't have an account?
Sign In
Advertisement
in: Tier 9, Tier 9-B, Tier 6,
and 24 more 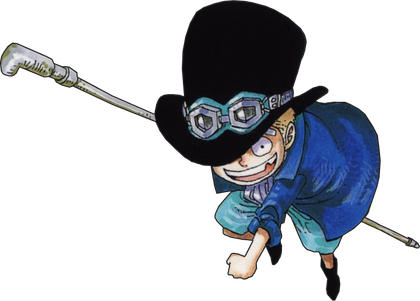 Sabo is Luffy and Ace's childhood friend and sworn "brother". His weapon of choice is a long pipe, and was the first of them to set out on their dream of becoming great pirates. He was believed to have been killed by the World Nobles, but is later revealed to have survived and has been taken in by Monkey D. Dragon, having lost his memory in the process and didn't remember his past until he hears the news of Ace's death. During his time with the revolutionaries, he eventually risen to the rank of Chief of Staff, making him Dragon's second-in-command. And this was before he ultimately found and ate the Flame-Flame Fruit (Mera Mera no Mi), inheriting Ace's power and will.

Same as before, Expert Hand-to-Hand Combatant (Knows martial arts dragon style techniques), Proficient Pipe User, Haki (Kenbunshoku, Intermediate Busoshoku), Fire Manipulation, Elemental Intangibility, Inorganic Physiology (Type 1. While he's turned into fire), Regeneration (Mid-High, only in Logia form), Body Control (He should be capable of altering the size and shape of his logia-form to some degree), Accelerated Development (Learned to control his fruit in an instant), Limited Flight via propulsion, Resistance to Fire Manipulation (All Logias are resistant to their respective elements).

Attack Potency: Wall level (Capable of fighting and wounding a tiger this strong alongside Ace and Luffy. Equal to Young Ace, and fought against him dozens of times as kids. Repeatedly beat Young Luffy in battle) | At least Island level (Casually broke Diamante's rapier with his pipe)

Speed: Subsonic (Fought a tiger this fast alongside his brothers) | At least Relativistic+ (Kept up with Issho)

Lifting Strength: Class K (Physically stronger than Young Luffy, who swings with this much force, and capable of producing similar amounts of force) | At least Class T (Could walk through Issho's Ferocious Tiger, which pushed back Luffy)

Durability: Wall level (Capable of taking several hits from Ace, who can match his AP) | At least Island level (Stood within Fujitora's Ferocious Tiger, and could take hits from him)

Intelligence: Skilled combatant, in charge of a large number of the revolutionaries

A martial style that uses the hands. This technique was possibly passed down to Sabo by Monkey D. Dragon. Sabo can also enhance the strength of his attacks with Busōshoku Haki. Later, he adapts his new powers from the Mera Mera no Mi into his fighting style.

A Logia type Devil Fruit, this fruit allows the user to transform into fire at will as well as control it. The fruit's major strength like other Logia types allows the user to produce as well become the element they control. In this case, Sabo is able to create, control, and become fire. The elemental state the ability endows him with also allows him to avoid conventional attacks as they only disperse him. Turning into fire also has the added effect of burning an opponent depending should the attack be close range and such. Though the user is fire in the elemental state, they are weak against magma, which can consume flames and can be burned by it despite their dispersion, making it their natural enemy.