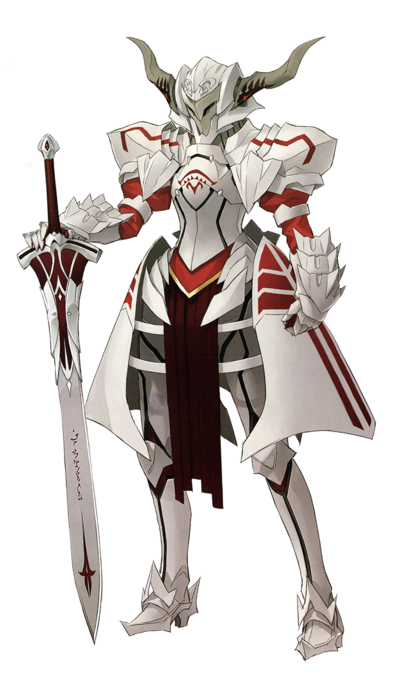 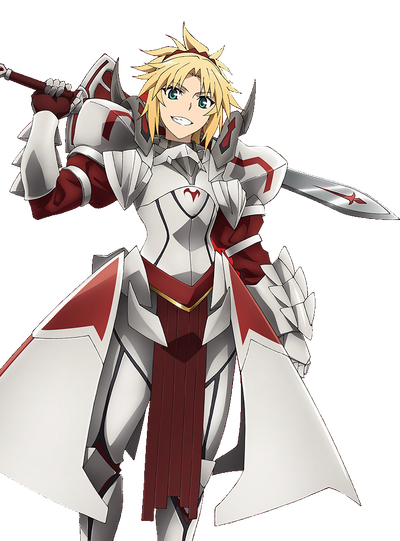 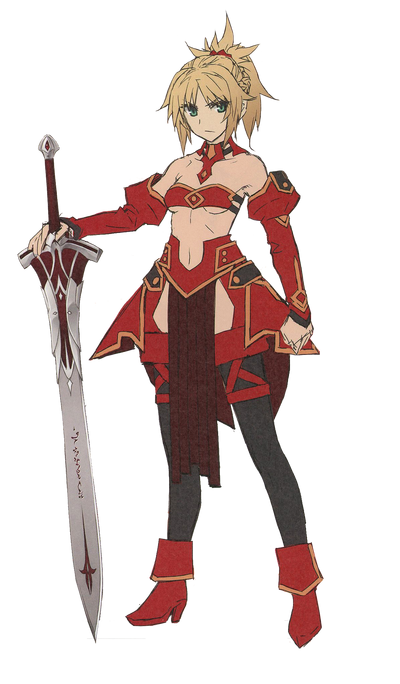 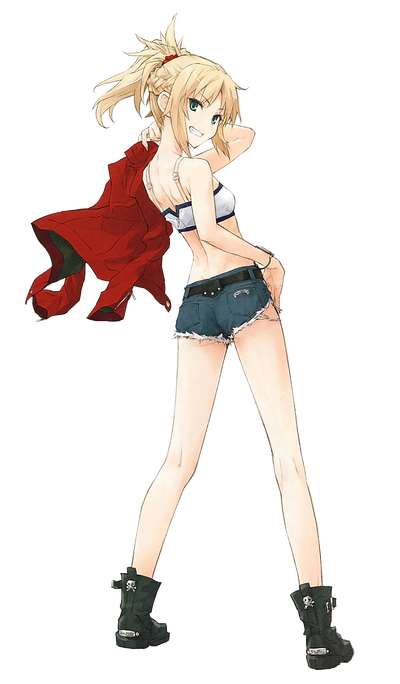 Saber of Red is the Saber-class Servant of the Red Faction during the Great Holy Grail War, summoned by Kairi Sisigou. Her true name is Mordred, the secret, illegitimate "son" of King Arthur, created by Morgan le Fay and developed as a homunculus clone of Arturia. As a homunculus, she matured much faster than a human, but had a much shorter lifespan in turn. Raised in secret, she was eventually sent to Camelot, where she was accepted into the Knights of the Round Table due to her exceptional skill.

She did her best to act as the ideal knight she saw in picture books, and watched her "father" with great admiration. When she eventually decided to tell the king of her existence in the hopes of being made her heir, she did so happily, with not even the slightest thought of rebellion, but Arturia bluntly rejected her, seeing that she would not make a good king. Distraught, Mordred did not understand, believing that her father hated her and could never accept her existence, and so the love she had felt for her became dirtied by hate.

Eventually, she led a rebellion against the crown while Arturia was fighting abroad, and the two of them fought in the Battle of Camlann. There, Mordred was impaled on the spear Rhongomyniad, and, as she died, she reached out towards her father one last time, but could not touch her. In her final breath, bound by a strong curse, she lethally wounded Arturia, and then collapsed, dead, having brought on the collapse of Camelot with her rebellion.

Name: Saber of Red, Mordred, the Knight of Treachery

Powers and Abilities: Superhuman Physical Characteristics, Expert Swordsman, Precognition and Enhanced Senses via Instincts (can "feel" the best course of action in combat, halves the effects of all visual obstructions, was able to detect enemies approaching faster than Dr. Roman's Chaldea technology could in London), Minor Mind Manipulation and Social Influencing with Charisma, Energy Projection (Can focus her hatred into magical energy and project it from Clarent), Statistics Amplification (Can reinforce her body with magical energy to increase her strength and durability), can "ride" nearly any vehicle or mount with supernatural skill, Animal Manipulation, can temporarily fight on even with lethal injuries, Limited Power Nullification and Servant Physiology

Attack Potency: Island level (Fought and eventually mortally wounded her "father" in life, and managed to trade blows with Sieg, though she was reinforced by a Command Spell), Small Country level with Clarent Blood Arthur (As an A+ Rank Noble Phantasm, it should be comparable to Siegfried's A+ Rank Noble Phantasm)

Speed: Massively Hypersonic (Comparable to her "father" and the other Knights of the Round, several of which can fight Gilgamesh).

Durability: Island level (Easily deflected Frankenstein's attacks and survived the latter's Noble Phantasm after both Servants had been boosted with Command Spells)

Stamina: Very High (Servants can fight for an entire day without tiring and continue fighting for as long as they have sufficient mana. Mordred was able to keep on going and lethally wound her "father" even after she was lethally wounded by Rhongomyniad. Even after surviving Blasted Tree, she was able to fight Sieg and use Clarent Blood Arthur, and continued to fight even after being badly injured by the resulting clash and the intense pain it caused her. Kept fighting even after experiencing the incredibly painful and lethal effects of Hydra Venom)

Standard Equipment: Her armor, Secret of Pedigree, and Clarent.

Intelligence: In contrast to her "father's" beautiful and elegant swordsmanship, Mordred fights like a wild animal. She bites, kicks, punches, and claws her way to victory if she deems it necessary. Thus her technique is poor when compared to other members of the Round Table like Lancelot, she is nevertheless an effective combatant and an expert swordsman who is more than capable of plowing through Avicebron's golems, which are comparable to lesser Servants in terms of strength and durability, and she nearly managed to defeat Arturia during their final battle. In addition, she's able to fight with the mighty Siegfried, whose swordsmanship has long surpassed the realm of man, despite being outmatched. However, due to being rapidly aged into her current form by her mother, Mordred is short-tempered, chlidish, and undisciplined, easily losing her composure in the midst of a fight and wildly attacking her foes in a berserk rage. She is also prideful of her nature as the "son" of the King of Knights, looking down upon weaker foes, a flaw that would have allowed Frankenstein to kill her if not for Mordred's master bailing her out with a Command Seal.

Weaknesses: Mordred is haughty, overconfident, prideful and extremely short-tempered, She will be immediately enraged if anyone calls her a girl, mentions her father, or talks about the Round Table within earshot of her. She must remove Secret of Pedigree to use Clarent Blood Arthur, and using it drains her and leaves her in excruciating pain.

Blessing of Rampage: A blessing given to her by the Lion King during the Camelot singularity, though she never asked for it. It grants her the ability to use all of her power to repeatedly use her Noble Phantasm over and over at the cost of burning her soul to nothing, allowing her to take down large groups of armies at a time no matter the numbers. However the gift, coming from that of her father's, clashes with her Secret of Pedigree, a symbol of her rebellion to the latter, and thus causes her to be unable to utilize it unless she removes the helmet.

Clarent: Radiant and Brilliant Royal Sword: Mordred's famous sword, which she stole from King Arthur's armory in Camelot. It originally was a treasured B-rank sword comparable to Excalibur that denoted the right to succeed the throne, but it has been lowered in rank, as she was never acknowledged as the successor to the throne. It thus gives none of the bonuses it would normally confer to her parameters and Charisma, instead acting simply as a high-quality sword. Mordred channels her magical energy through it to make use of Mana Burst, and by channeling her extreme hatred into the blade, she can make use of her ultimate attack, Clarent Blood Arthur.

Secret of Pedigree: Helm of Hidden Infidelity: Mordred's helmet, given to her by Morgan le Fay with the instructions to never remove it when anyone can see, as it disguises her identity and lineage. When in use, it hides any details on her identity, her personal skills, and her Noble Phantasms. It is even capable of nullifying the True Name Discernment of the Ruler class, and prevents most of those who could otherwise discern her identity from fully recollecting vital information, only vaguely feeling like they recognize her. Her statistics and details on her abilities only become visible when she deactivates her helmet, but she can maintain its effects even when unarmored until she takes off the helmet while wearing her armor or draws her sword.

Magic Resistance: An innate ability that grants protection against magical effects. Unlike the Resistance effect that merely rejects Magical Energy, this ability cancels the spells altogether. Bearing the blood of dragons, just as King Arthur does, Mordred has B-rank Magic Resistance, negating spells with a chant below three verses, and making it difficult for even High-Thaumaturgy and Greater Rituals to affect her.

Riding: The ability to ride mounts. As a Knight of the Round Table, Mordred has experience in riding, reflected by her B-rank skill, which allows her to handle vehicles and animals with above average skill, even those that did not exist in her time. However, she cannot ride members of the Phantasmal Species.

Battle Continuation: A skill that reflects one's exceptional vitality and endurance, allowing the user to fight on despite grievous wounds and escape safely even when defeated. Even after being pierced by the holy spear Rhongomyniad, Mordred did not give up, her sheer hatred and the curse it carries allowing her to deliver a lethal wound to her father with her final breath, resulting in a B rank in this skill.

Charisma: The natural talent to command an army, which increases the ability of allies during group battles. Like her father, Mordred also possesses this skill. However, due to her actions during life, it is limited in scope, and thus she is only able to easily persuade small groups of normal individuals, but it is nowhere near enough to lead a country. This is further complicated by her abrasive personality and vulgar vernacular, but it shows its true worth during a rebellion as was the case that lead to the battle of Camlann, giving her a rank of C- in this skill.

Instinct: The power to "feel" the most favorable developments for oneself during battle. Mordred has inherited this ability from Arturia, though her intuition is not as potent as hers due to its B rank. Nonetheless, it still allows her to halve the penalties caused by visual obstructions and auditory hallucinations, being as she was able to dodge Chiron's arrows while fighting with Jack the Ripper.

Mana Burst: A skill that allows for an increase in performance by infusing one's weapons and body with magical energy, for both defensive and offensive purposes, effectively recreating the effects of a jet burst. Another ability inherited from her father, which allows Mordred to keep up with even her, as well as the fastest Servants, using it to propel herself across the battlefield and to reinforce her strength as reflected by her A rank in this skill. It allows for the use of Clarent Blood Arthur, which Mordred accomplishes by flooding her blade with her hate, and Mordred can release it on a smaller scale to cause bursts of crackling red electricity to knock away opponents and to extend the range and power of her attacks.