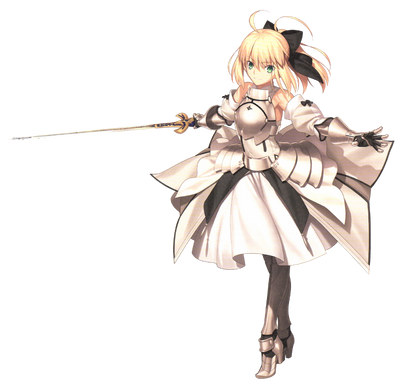 Saber Lily is one of the Servants of the Grand Orders. Her true name is Artoria Pendragon, better known as King Arthur, the "Once and Future King" and a legendary hero of Britain. She became king by pulling the sword Caliburn from the stone, and then set out to train to become king as the Knight Princess. She went on many adventures with her stepbrother Sir Kay, and their attendant magus, Merlin, saving many people and causing mischief along the way.

After Caliburn shattered in a battle where she broke the rules of chivalry, she was given the greatest holy sword, Excalibur, and went on to become king of Britain.

Powers and Abilities: Superhuman Physical Characteristics, Enhanced Senses, Expert Swordswoman, Limited Precognition (Her Instinct is sharp enough to the point of precognition, and also allows her to "feel" the best course of actions to take during battle), Some Magecraft, Energy Projection, Statistics Amplification (Can reinforce her body with magical energy to increase her strength and durability), Water Walking, Supernatural Luck, Minor Fate Manipulation (Servants with B-rank Luck or higher can change their own fates to evade inevitable outcomes such as having their hearts destroyed by Gáe Bolg), Limited Power Nullification, Vehicular Mastery, Animal Manipulation and Servant Physiology, Resistance to BFR

Attack Potency: Island level (Should be comparable to other Servants, such as Archer). Higher with Caliburn (A B-rank Noble Phantasm, making it comparable to a similar ranked Noble Phantasm such as Phoebus Catastrophe). Large Island level with overloaded Caliburn (When overloaded with magical energy, it will showcase a release of power on a similar scale to Excalibur before being destroyed. With this, it killed Berserker seven times over in this fashion when used by her older self and Shirou).

Speed: Massively Hypersonic (Should be somewhat comparable to her older self. When projecting Caliburn and calling upon her memories and fighting skill, Shirou deflected a barrage of Noble Phantasms from the Gate of Babylon)

Standard Equipment: Her armor, materialized through her own power, and Caliburn.

Intelligence: Saber is an extremely accomplished swordswoman suitable for her class. However, this version of her is younger and thus less skilled than her older self. She is also knowledgeable of magecraft, having been Merlin's apprentice in her youth. She is a fair bit more idealistic, however, and her instincts remain sharp, allowing her to easily read an opponent's style and predict the flow of battle in a manner closer to precognition.

Weaknesses: Saber is bound by her honor as a knight, and she'd thus never rely on underhanded or more pragmatic tactics - if she does, Caliburn will shatter. Her sixth sense can be fooled by things that Saber has never experienced. Releasing Caliburn's full power will destroy it.

Caliburn: Golden Sword of the Victorious: The holy sword that Artoria Pendragon pulled from the stone in her youth to become king. While it is weaker than Excalibur, as it is a blade forged by mortal hands, out of the two it is Artoria's preferred weapon as she trained with it in her youth. When she first drew it from the stone, it filled her surroundings with a golden light, making her "something inhuman" and stopping her aging. It can be used in a similar method to Excalibur, converting Artoria's magical energy into heat and releasing it as a beam of light that killed Berserker seven times over when used by her older self and Shirou. Although it is inferior to Excalibur, it can showcase a similar output if Artoria overloads it with her magical energy at the cost of its own destruction.

Magic Resistance: An innate ability that grants protection against magical effects. Unlike the Resistance effect that merely rejects Magical Energy, this ability cancels the spells altogether. Due to her young age, the heart of the dragon inside her has not awoken, and Saber Lily's Magic Resistance is thus lower than that of her adult self. It is still powerful enough to negate magecraft of B-rank or lower, even High-Thaumaturgy.

Riding: The ability to ride mounts. Due to her training as a knight, and the time she's spent with horses, Saber Lily's C-rank can flawlessly ride animals and drive vehicles that have been properly trained or adjusted.

Blossoming Journey: A blessing on the knight who had only just begun her journey to become king. Due to her idealism and hopefulness, the hearts of those Saber Lily fights alongside are lifted and they fight more actively, inspired by her example.

Instinct: The power to "feel" the most favorable developments for oneself during battle. While not as sharp as her older self's instincts, Saber Lily's senses are still highly refined, and due to her B-rank in this skill, it reaches the level of true precognition and allows her to reduce the penalties that visual obstructions cause by 50%. She has a knack for picking up on the troubles of others, and is driven to help all those in need.

Mana Burst: A skill that allows for an increase in performance by infusing one's weapons and body with magical energy, for both defensive and offensive purposes, effectively recreating the effects of a jet burst. Saber Lily uses this skill mainly for defense and high-speed movement, propelling herself across the battlefield at high speeds while reinforcing her entire body with magical energy. With A-rank, even a stick can become a great weapon. 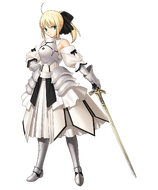 Retrieved from "https://vsbattles.fandom.com/wiki/Saber_Lily?oldid=5720853"
Community content is available under CC-BY-SA unless otherwise noted.