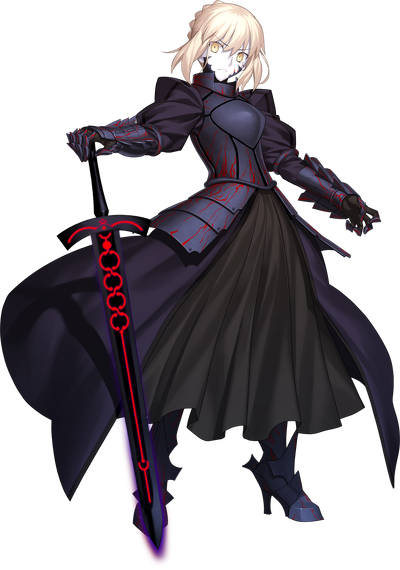 Saber Alter is the Saber-class Servant of Sakura Matou during the Fifth Holy Grail War, in Heaven's Feel route. She is an "altered" Saber, tainted by the mud of All the World's Evil.

Attack Potency: Island level (Has A-rank strength, is far superior to her original self as a Servant and bypassed God Hand with normal blows. Has been referred to as the physically strongest Servant of the Fifth Holy Grail War, and even stated to be equal in strength to Berserker), Large Island level with Excalibur Morgan (Should be equal to the normal Excalibur and thus superior to Caliburn. Also vaporized the fragments of Bennu, which has an estimated impact force of 1.2 Gigatons of TNT).

Speed: Massively Hypersonic (Slower than before, but can still easily overwhelm Berserker. Is easily able to react and block Rider's attacks, even those directed at her blind spots, despite the latter moving and attacking her from all directions)

Lifting Strength: Class 25 (Superior in strength to her usual self)

Durability: Island level (Has A+ rank durability, making her superior to Heracles and Gawain)

Stamina: Virtually infinite, on account of her Master's power source.

Standard Equipment: Her armor, materialized through her power, and Excalibur Morgan.

Intelligence: Saber is an extremely accomplished swordswoman suitable for her class, clashing with even the strongest heroes in swordplay with few laying claims to have superior skill. Becoming the king of a prosperous nation at the age of fourteen, she is a skilled politician and an able leader who can effectively lead armies into battle and governing most of Britain by the end of her rule. Artoria is also knowledgeable of magic, having been Merlin's apprentice in her youth, and is familiar with most European Heroic Spirits. As Saber Alter, her swordsmanship and technique are slightly inferior compared to her usual self, as she loses fine control in exchange for far greater destructive power. She is mostly emotionless and apathetic, following her orders without question, but can be enraged if her opponent isn't going all out against her.

Weaknesses: Unlike other Servants, Saber Alter isn't a proper Heroic Spirit, possessing a physical body that cannot go into spirit form. She also has to struggle against her temper continually, and her regeneration takes time, up to ten minutes, depending on the scale of the wounds.

Excalibur Morgan: Sword of Promised Victory: The blackened form that Excalibur takes on after Saber is corrupted by All the World's Evil. It is still the most powerful magic sword despite its corruption. When activated as a Noble Phantasm, the entire blade is covered in black flames, which are then released in a stream of energy to destroy everything in its path. It can also be utilized in the form of a melee attack known as Vortigern: Hammer of the Vile King, cutting the target to pieces with three upward swings while the blade is coated in dark mana. In Heaven's Feel, Saber Alter is capable of freely firing this with virtually no limit as opposed to her standard counterpart due to having access to more mana than ever thanks to Sakura's connection to the Grail and receiving mana from the latter.

Magic Resistance: The ability to completely nullify and shrug off oncoming magical attacks. Unlike the Resistance effect that merely rejects Magical Energy, this ability cancels the spells altogether. Saber Alter's B-Rank in this ability is enough to cancel spells with a chant below three verses. Even if she targeted by High-Thaumaturgy and Greater Rituals, it is difficult for her to be affected.

Riding: The ability to ride mounts with proficiency. Saber Alter lost her ability to utilize this skill due to her corruption.

Charisma: The ability to lead armies into battle. Saber's rank in this skill has fallen to E after her corruption. As a result, she can lead effectively, but the morale of her troops will sharply drop under her command.

Instinct: The power to "feel" the most favorable developments for oneself during battle. Artoria's senses are dulled due to the constant suppression of rage caused by Angra Mainyu's corruption, degraded her Instinct to B-rank. It remains, however, and due to Saber Alter's more pragmatic fighting style, she is more likely to take action.

Mana Burst: A skill that allows for an increase in performance by infusing one's weapons and body with magical energy, for both defensive and offensive purposes, effectively recreating the effects of a jet burst. As Saber Alter, she engulfs her attacks with the dark mana surging through her body, causing black arcs to follow the path of her sword as she strikes with greater force than she ever could originally. She can also release bursts of her mana as projectiles in an attack called Burst Air. She can also manipulate and shape the mana she releases into the shape of a dragon's head to grab, bite, and throw her target in an attack called Tyrant Clap or convert them into dark tendrils to strike opponents. 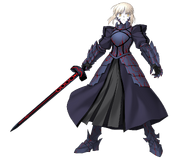 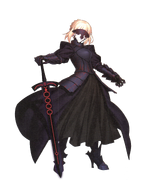 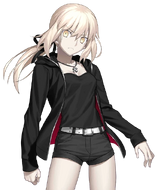