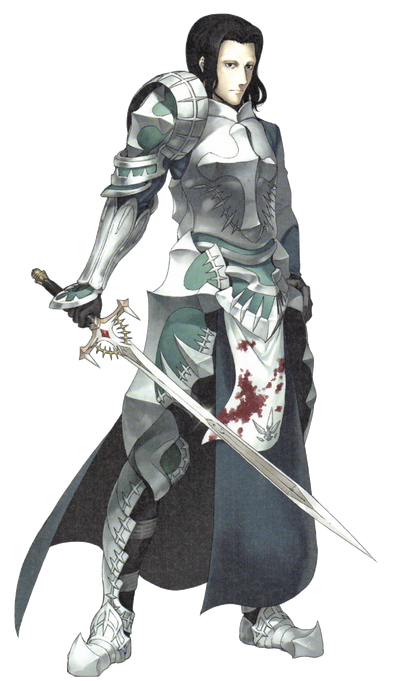 Saber is a Saber-class Servant Ritsuka Fujimaru can summon in the Grand Orders of Fate/Grand Order. His human self is an ally in the Orleans Singularity.

Saber's True Name is Gilles de Rais, a national hero of France who served under the famed Saint of Orleans, Jeanne d'Arc. However, under normal circumstances, his heroic aspects are lost due to his later atrocities that inspired the legend of Bluebeard. Even now he is on the verge of insanity, unsure of when he'll finally snap and turn into his later identity as an infamous seeker of the occult.

Attack Potency: Island level (Fought alongside Jeanne d'Arc in life and has B-Rank Strength), higher with Saint War Order and Prelati's Encouragement (Each offers a rank up to his Strength parameter equal to Mad Enhancement)

Speed: Massively Hypersonic (Has C-rank agility and should be able to keep up with most Servants in combat)

Durability: Island level (Has C-Rank Durability and should be comparable to a more modern Servant like EMIYA), higher with Saint War Order (Ranks up his Endurance parameter to B-Rank)

Stamina: High (Servants can fight for an entire day without rest and continue fighting for as long as they have mana)

Intelligence: As a commander serving directly under Jeanne d'Arc, Gilles has a wealth of experience commanding armies, especially offensive sieges. As a Saber-class Servant, he is also superhumanly skilled with a sword compared to anyone in the modern day. However, his skill pales in comparison to more famous Sabers like King Arthur.

Weaknesses: Cannot fight in Spirit Form. Using Prelati's Encouragement for too long or using Prelati's Spellbook will drive Gilles insane and turn him into the insane murderer he was at the end of his life. Using Saint War Order compels him to continue attacking until his opponent is silenced.

Saint War Order: Rally Upon the Holy Banner and Roar: The Noble Phantasm of Gilles as a Saber. He brandishes the battle standard of Jeanne d'Arc to recreate the most brilliant point in his life while serving under her flag, gaining a rank up to all of his parameters. He also gets an additional bonus to his attack damage, but he will be automatically compelled to continue fighting until his enemy is silenced due to gaining effects similar to that of Mad Enhancement.

Prelati's Spellbook: Gilles possesses the same eldritch tome used by his Caster counterpart, allowing him to summon familiars in the shape of cosmic horrors by offering human sacrifices. But doing so will immediately plunge Gilles into insanity, reverting him into his Caster form and causing him to lose his Noble Phantasm in this class.

Caster (Fate/Zero) Caster's Profile (Note: Caster had enough preparations for summons, but not his Gigantic Horror)