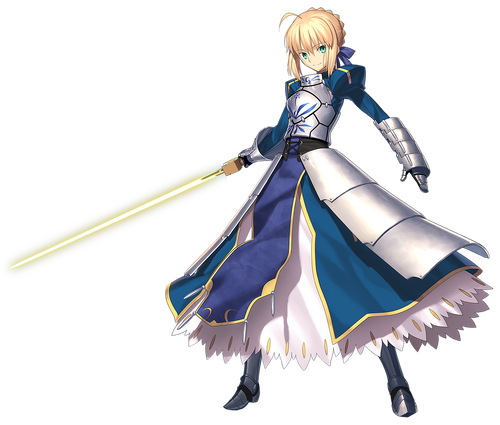 Saber is the Saber-class Servant of Kiritsugu Emiya during the Fourth Holy Grail War, and then of his son, Shirou Emiya, during the Fifth. Her actual name is Artoria Pendragon, better known as King Arthur, the "Once and Future King" and a legendary hero of Britain. She became king by pulling the sword Caliburn from the stone, but after it was destroyed, she was given Excalibur and Avalon by the Lady of the Lake.

She is not a true Heroic Spirit, but instead the real Artoria, who made a deal with the World to act as a Servant, hoping for a chance to win the Grail and use it to redo her rule or erase it from existence, so that the tragedies that occurred in her life would not happen.

Name: Saber. Artoria Pendragon, King of Knights, the Once and Future King.

Powers and Abilities: Superhuman Physical Characteristics, Enhanced Senses, Master Swordswoman, Precognition (Has a high rank in her Instinct skill to the point of bordering on precognition, allowing her to avoid fatal blows such as Cu's Gae Bolg and Kojirou's Tsubame Gaeshi), Minor Mind Manipulation and Social Influencing with Charisma, some Magecraft, Air Manipulation with Invisible Air (Acts as a sheath of wind for Excalibur, rendering it invisible, and she can release it as an attack), Forcefield Creation (Can form a defensive wall of air and use Avalon to produce a barrier that can block out even the True Magics), Energy Projection, Statistics Amplification (Can reinforce her body with magical energy to increase her strength and durability), Immortality (Types 1 and 3 with Avalon), Regeneration (At least Mid-Low; regenerated from being severely injured and nearly killed by Enuma Elish, and from Gilgamesh cutting through her neck. Has also regenerated getting pierced by Gae Bolg in the chest and from her battle with Berserker. Low-Mid over time; Servants can continue fighting even with a hole through their gut and can regenerate unless their head/heart is destroyed, or they run out of mana. Low-Mid with Avalon; Shirou was able to regenerate from being nearly cut in half and having most of his internal organs destroyed with Avalon), Animal Manipulation, can "ride" any vehicle or mount with supernatural skill, Self-BFR, Intangibility and Invulnerability with Avalon (Shuts out all interference up to the sixth dimension, including True Magic, can block attacks from a "higher-order dimension"), Limited Conceptual Manipulation (Avalon is considered a conceptual armament, and Shirou keeping it for a long time eventually overwrote his Origin into the concept of "Sword"), Water Walking, Supernatural Luck, Minor Fate Manipulation (Servants with B-rank Luck or higher can change their fates to evade inevitable outcomes such as having their hearts destroyed by Gáe Bolg), Minor Technology Manipulation (Can apply Mana Burst to vehicles), Limited Power Nullification and Servant Physiology

Speed: Massively Hypersonic (Comparable in speed to her Prototype self. Can keep up with Gilgamesh, Lancer, and Rider. Could dodge any of Archer's arrows and fought Diarmuid at speeds Irisviel couldn't comprehend).

Lifting Strength: Class K (Can lift and push a trailer truck; Has a B in Strength, making her comparable to Achilles) | Class K | At least Class K, possibly higher (Has an A Strength Parameter)

Stamina: Very high. Other Servants can fight for nearly an entire day without stopping. As long as Saber has a steady supply of magical energy from her Master, she can keep on fighting. In Garden of Avalon, she fought against Vortigern for several hours straight, even as Excalibur was drained of most of its light.

Standard Equipment: Her armor, materialized through her power, Excalibur, Invisible Air, and Avalon.

Intelligence: Saber is an extremely accomplished swordswoman suitable for her class, clashing with even the strongest heroes in swordplay with few laying claims to having greater skill than her. Becoming the king of a prosperous nation at the age of fourteen, she is a skilled politician and an able leader who can effectively lead armies into battle and governing most of Britain by the end of her rule. She is also knowledgeable of magic, having been Merlin's apprentice in her youth, and is familiar with most European Heroic Spirits, quickly recognizing Cú Chulainn and Diarmuid Ua Duibhne after seeing their Noble Phantasms once.

Weaknesses: The chivalric code binds Saber as a knight, and she'd thus never rely on underhanded or more pragmatic tactics. Her sixth sense can be fooled by things that Saber has never experienced. Unlike other Servants, Saber isn't a proper Heroic Spirit, possessing a physical body that cannot go into spirit form though she does not have this in the world of Fate/Grand Order. She harbors a great deal of self-loathing and regrets over her actions and perceived failures as the King of Britain, which can be exploited to rile her up or to break her mentally. Losing the ability to use one of her hands properly will prevent her from using Excalibur to its fullest potential, reducing its range to that of an Anti-Unit Noble Phantasm and weakening it considerably.

1 of 3
Add photo
Invisible Air: Bounded Field of the Wind King: A mysterious wind that hides Excalibur's identity. It is a Bounded Field, closer to regular magic than a Noble Phantasm, presumably created by Merlin. The powerful winds around the blade distort light, rendering Excalibur completely invisible and its shape near-impossible to discern, keeping her opponents confused and unable to properly gauge its size and length, or even what kind of weapon it is. Once they figure it out, however, it becomes useless in this regard. It takes on Excalibur's sharp edge, and Saber can use it to form a defensive wall of wind large enough to envelop a building. Once the barrier is released, the compressed wind surges around her and can be released as a single-shot weapon, known as Strike Air: Hammer of the Wind King. She can also use it to propel herself forwards at greater speeds.

Excalibur: Sword of Promised Victory: King Arthur's most famous and powerful Noble Phantasm. It is a Divine Construct; more specifically, it is a "Last Phantasm," one of the ultimate weapons built by the gods; or, in this case, it's the crystallization of humanity's wishes forged by the planet itself. Much like Excalibur Proto, it is a weapon designed to protect the earth by defeating those that would destroy it. Due to its incredible potential for destruction, its real power is restricted by multiple oaths.

When activated, it converts Saber's magical power into light that is then released as a destructive wave of energy on the level of Divine Thaumaturgy. Despite the appearance of this function, only the tip of this energy wave can do damage, as the rest of the light emitted by Excalibur is the dislocation of everything it has destroyed along its path. Excalibur also boasts one of the fastest activation speeds among Noble Phantasms, matching the charging speed of both the original Pegasus and Iskandar's chariot, completing its activation in less than a second. Saber has also demonstrated the ability to partially invoke Excalibur's power in both melee combat and its activated form, dispelling Invisible Air to cut down Assassin in a single strike and forcing Gilgamesh to dodge an attack with a thinner beam that was charged while in motion.

Avalon: The Everdistant Utopia: Excalibur's sheath, a Divine Construct of the same origin. Passively, Avalon bestows immortality and regeneration upon its wielder; they stop aging and can regenerate even from blows that remove most of their torso and their heart. It cannot, however, restore a destroyed brain. Its real power is in its active use as an "absolute defense." It puts the user in Avalon, the land of the fairies, the unreachable utopia that the king strived to reach in life. It dissipates into magical particles and becomes a "portable fortress" that blocks off any interference, even up to the sixth dimension. It is on the level of true magic, and not even the Five Magics can bypass the barrier.

Magic Resistance: An innate ability that grants protection against magical effects. Unlike the Resistance effect that merely rejects Magical Energy, this ability cancels the spells altogether. Due to possessing the blood of dragons, Saber has a stellar A-Rank in this ability, rendering her virtually invulnerable to all modern magi's spells and even of Caster's from the Age of Gods. This also applies to indirect magic attacks, such as magical hypnosis, petrification, and spatial manipulation.

Riding: The ability to ride mounts. Saber is proficient in this ability due to riding horses throughout her life, resulting in B rank Riding and allowing her to ride practically any horse or modern vehicle with complete control, even things from far beyond her time such as the heavily modified Yamaha V-Max Kiritsugu customized for her though due to having lived in the Age of Man, this does not extend to mounts such as those under the Phantasmal species. While under Kiritsugu, her Riding rank rises to A, further increasing her ability to ride all known regular mounts and vehicles but still falling short to be able to ride those of the Divine and Phantasmal species. Using the bike mentioned above, her previous master made for her and enhancing it with her Mana Burst ability, she was able to keep pace with Rider's chariot and easily dodges the latter's attacks while veering through traffic, reading the airflow to allow her to accomplish such feats with her eyes closed.

Charisma: The natural talent to command an army, which increases the ability of allies during group battles. It is said that a rank of B in this skill is sufficient to lead a nation as its King.

Instinct: The power to "feel" the most favorable developments for oneself during battle. Saber has an A-Rank in this skill, granting her a refined sixth sense that is close to real precognition that allows her to avoid a death blow from Cu's Gae Bolg as well as Sasaki Koujirou's Tsubame Gaeshi and finding an opening in their second encounter, in addition to halving the hindrance that visual and auditory obstructions would generally provide.

Mana Burst: A skill that allows for an increase in performance by infusing one's weapons and body with magical energy, for both defensive and offensive purposes, effectively recreating the effects of a jet burst. Saber uses this skill mainly for her sword techniques, defense, and high-speed movement, propelling herself across the battlefield at high speeds while reinforcing her entire body with magical energy. With A-rank, even a stick can become a great weapon. Due to this and with her own innate high magical capacity, she can even fight off and take Berserker's blows, though ultimately would lose due to Shirou's inability to provide her with sufficient mana. 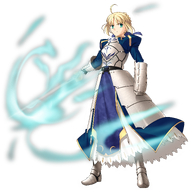 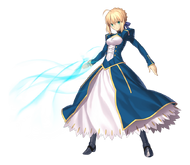 Saber in Fate/Extella
Add a photo to this gallery