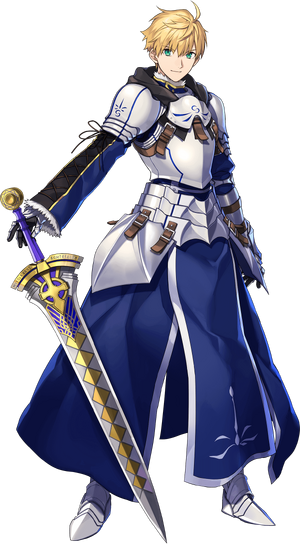 Saber is the Saber-class Servant of Manaka Sajyou during the First Holy Grail War, and later, of her sister, Ayaka Sajyou, during the Second.

His real name is Arthur Pendragon, better known as King Arthur, the King of Knights and a legendary hero of Britain. He is identical to the Heroic Spirit Artoria Pendragon, possessing the same past and legend as her, while still being a different person. He is a Heroic Spirit from a parallel world, who managed to reach another parallel universe while hunting down Beast VI.

Name: Saber. Arthur Pendragon, King of Knights, the Once and Future King.

Age: Unknown; presumably 24 if summoned at the same age as his mainstream counterpart

Powers and Abilities: Superhuman Physical Characteristics, Enhanced Senses, Master Swordsman, Precognition (His Instinct is high enough to the point of precognition and, due to this, should be the same as his female counterpart), Minor Mind Manipulation with Charisma, some Magecraft, Air Manipulation with Invisible Air, Energy Projection, Statistics Amplification (Can reinforce his body with magical energy to increase his strength and durability), his sword is normally invisible, Animal Manipulation, can "ride" any vehicle or mount with supernatural skill, is an expert at slaying monsters, Supernatural Luck, Minor Fate Manipulation (Servants with B-rank Luck or higher can change their own fates to evade inevitable outcomes such as having their hearts destroyed by Gáe Bolg; Saber has B-ranked Luck in Fate/Grand Order), limited Power Nullification and Servant Physiology

Attack Potency: Island level (Managed to kill one of Ozymandias' Sphinxes, who had the power to take on three Servants at once, and was also a Divine Beast, superior to Rider's Pegasus, a Phantasmal Beast, though this was mostly thanks to his supernatural skill in slaying beasts and the enhanced Mana Burst he gained by removing his armor). Large Island level with Excalibur Proto (Even with all of its restraints on, it is still classified as an EX-ranked Anti Fortress Noble Phantasm, which should make it superior to his female counterpart's Excalibur). Continent level with an unknown amount of Restraints released (Vaporized the Surge of Utnapishtim created by Gilgamesh's Enki. Matched Dendera Lightbulb with help of Arash's Stella). Much higher with over half of its Restraints released (Excalibur Proto is a Divine Construct meant to save the planet and specifically designed to defeat beings that could destroy the earth once over half of its Restraints are released).

Speed: Massively Hypersonic (Can keep up with Gilgamesh and react to his projectiles).

Intelligence: As the King of Camelot and the alternate counterpart of the King of Knights, Saber is undoubtedly a master swordsman, having led a ring of the most famous knights in Britain's history, including the incredibly skillful Lancelot and Gawain. A high-class Servant, he can go toe-to-toe with all but the strongest Servants in one-on-one combat, managing to fight on par with Gilgamesh and easily trumped Lancer. Also, Saber seems to possess none of the self-doubt and loathing that plagued Artoria Pendragon, giving him greater clarity in combat and prevents him from being manipulated as easily.

Weaknesses: Saber is bound by his honor as a knight, and he'd thus never rely on underhanded or more pragmatic tactics. His sixth sense can be fooled by things that Saber has never experienced. Very tight and specific restrictions limit Excalibur Proto's full power.

Invisible Air: Bounded Field of the Wind King: Excalibur Proto's sheath, a mysterious wind that hides its true identity, preventing other Servants from identifying him. It is a Bounded Field, closer to normal magecraft than a Noble Phantasm, presumably created by Merlin. The powerful winds around the blade distort light, rendering Excalibur completely invisible and its shape near-impossible to discern, keeping his opponents confused and unable to accurately gauge its size and length, or even what kind of weapon it is. Once they figure it out, however, it becomes useless in this regard. It acts as one of Excalibur Proto's several seals.

Excalibur Proto: Sword of Promised Victory: The strongest holy sword, and King Arthur's most famous and powerful Noble Phantasm. It is a Divine Construct meant to save the world by defeating those capable of destroying the planet. It is locked by two seals, one of which is Invisible Air and the second of which are the Restraints of the Round Table, set upon the blade by the Knights of the Round Table. Its true power only shows once over half of the seals have been released, and the seals are as follows:

With but one Restraint released, upon activation, Excalibur Proto fired a thin but powerful beam of light that easily overpowered the Sword of Paracelsus, and a second attack overloaded the sword. With an unknown amount of Restraints released, he was able to destroy Gilgamesh's Star of Destruction and stop the Surge of Utnapishtim. When over half of its Restraints are released, it shows its true power as a Divine Construct meant to save the world, capable of defeating beings capable of destroying the Earth.

Magic Resistance: The ability to completely nullify and shrug off oncoming magical attacks. Due to possessing the blood of dragons and existing during the Age of Gods, Saber has a stellar A-Rank in this ability, rendering him virtually invulnerable to even magecraft from the Age of Gods, as with his mainstream counterpart.

Riding: The ability to ride mounts. At B-rank, Saber is proficient in this ability due to riding horses throughout his life, allowing him to ride practically any horse or modern vehicle with complete control.

Charisma: The natural talent to command an army, which increases the ability of allies during group battles. It is said that a rank of B in this skill is sufficient to lead a nation as its King. Arthur's Charisma is specialized for fighting against large animals, but he is incapable of displaying it as he usually ends up alone against them as his allies cannot keep up when fighting against the large animals.

Giant Beast Hunting: A skill representing one's vast experience in combating giant enemy lifeforms and magical beasts. Having fought against and defeated all the magical creatures that invaded Britain during his life, Saber has an A-rank in this skill.

Instinct: The power to "feel" the most favorable developments for oneself during battle. Saber has an A-Rank in this skill, granting him a refined sixth sense that is close to real precognition in addition to halving the hindrance that visual and auditory obstructions would normally provide.

Mana Burst: A skill that allows for an increase in performance by infusing one's weapons and body with magical energy, for both defensive and offensive purposes, effectively recreating the effects of a jet burst. Saber uses this skill mainly for defense and high-speed movement, propelling himself across the battlefield at high speeds while reinforcing his entire body with magical energy. With A-rank, even a stick can become a great weapon. 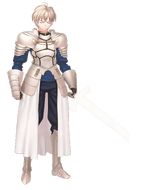 Sigurd (Fate/Grand Order) Sigurd's profile (Note: Both at their peak)