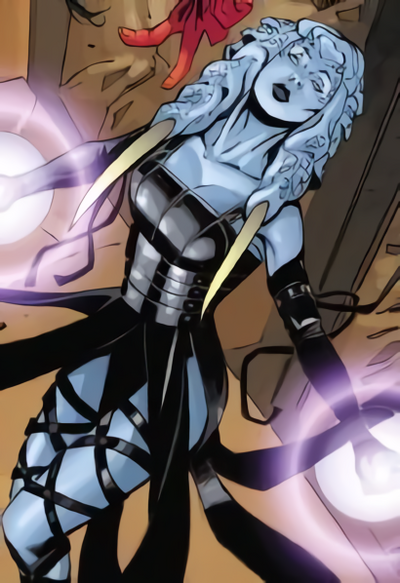 Saarai is a Sith apprentice and the daughter of the Sith Lord Darth Wyyrlok III, as well as the next in line to become the fourth Chagrian to have the name Wyyrlok bestowed upon her. After Darth Krayt's apparent death at the hands of Wyyrlok, Saarai guarded Krayt's stasis chamber in the ancient Sith Lord XoXaan's temple on the planet Korriban, and was instructed to not allow anyone entrance. When Saarai was confronted by Darth Stryfe, one of Krayt's Hands, she managed to successfully keep Stryfe from entering the chamber, nearly killing him had her father not intervened.

A few months later, Saarai and the One Sith felt the call of Darth Krayt through the Force, revealing that he was alive and not in stasis despite Wyyrlok's claims. After her father openly admitted to usurping Krayt, Saarai left the galactic capital Coruscant per his instructions, because her power had not yet been fully developed. Although her father was slain by Krayt, Saarai continued to serve the Sith Order. After the establishment of the Galactic Federation Triumvirate, Saarai operated as a Sith agent who, under the leadership of Darth Nihl, would infiltrate the galactic governments in an effort to destroy the One Sith Order's enemies from within.

Attack Potency: Planet level (Easily overpowered and nearly killed Darth Stryfe and would have done so if Darth Wyyrlok III had not stopped her)

Range: Hundreds of meters with Force abilities, At least Planetary via Telepathy

Intelligence: Gifted (Even though she was merely an "unmarked" Sith apprentice, Saarai was highly proficient in the dark side of the Force. She was highly skilled with telekinesis, being capable of overpowering a Sith Lord as powerful as Darth Stryfe, who had served as both Darth Krayt's Fist and Hand.)

Weaknesses: Has yet to reach her full potential ad a Force user

Retrieved from "https://vsbattles.fandom.com/wiki/Saarai?oldid=4990120"
Community content is available under CC-BY-SA unless otherwise noted.