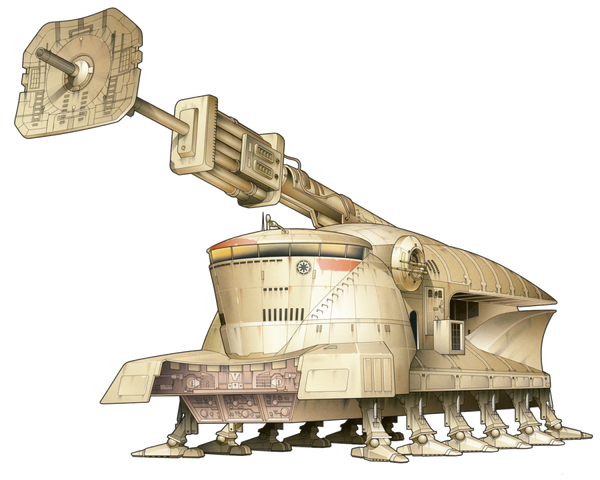 Self-Propelled Heavy Artillery (SPHA) were a kind of modular walker utilized by the Grand Army of the Republic during the Clone Wars of 22 to 19 BBY. The Self-Propelled Heavy Artillery - Turbolaser (SPHA-T) was the most common variant used by the Republic's forces. This variant boasted a turbolaser cannon capable of punching through the hull of unshielded warships such as Lucrehulk-class core ships and Munificent-class star frigates. Concentrated fire from multiple SPHA-Ts could bring one of them down quickly as witnessed during the First Battle of Geonosis. Many SPHA-Ts were also fitted with anti-personnel blaster cannons for defence against incoming enemy infantry or light vehicles. These gargantuan walkers were larger and far heavier than most light freighters and often had to be deployed directly by assault ships (such as those of the Acclamator-class) or small frigates whereas other walkers (such as the AT-TE) could be deployed directly by LAAT/c gunships. Many Venator-class star destroyers of the Open Circle Fleet, commanded by Obi-Wan Kenobi and Anakin Skywalker, installed the turbolaser of an SPHA-T in their ventral hangars (at Skywalker's suggestion) and made great use of them during the Battle of Coruscant. Though possessing great firepower and range, the SPHA-Ts were quite cumbersome and the lack of a rotating turret mounted main weapon reduced their overall tactical viability in many situations. After the fall of the Galactic Republic, they served in the Galactic Empire's Imperial Army for only a few years before being retired.

Needed Prerequisite for use: Trained crew of 12 to 15 (additional 10 to 12 gunners if equipped with anti-personnel blaster cannons)

Attack Potency: Building level+ with anti-personnel blaster cannons (5 Gigajoules per shot on the highest power setting). Large Island level with heavy turbolaser (Focused fire from multiple SPHA-Ts can bring down fully shielded Lucrehulk core ships. A single shot on the highest power setting can also eviscerate an unshielded Munificent-class Star Frigate or even a Providence-class Dreadnought. Overall appears to be in the same league as the heavy batteries of the Venator-class Star Destroyer. Should therefore be capable of unleashing such kind of firepower)

Durability: Likely at least Town level+ (Larger than and likely at least as durable as the likes of the AT-TE. Should be more than capable of surviving a burst from laser cannons such as those of the Slave I)

Range: Up to 2 km with anti-personnel blaster cannons, likely dozens to hundreds of kilometres with heavy turbolaser.

Note: This profile covers only the SPHA-T variant of the SPHA. 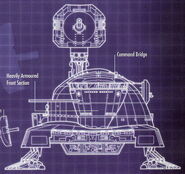 SPHA-Ts in action during the First Battle of Geonosis

Retrieved from "https://vsbattles.fandom.com/wiki/SPHA-T?oldid=6373000"
Community content is available under CC-BY-SA unless otherwise noted.