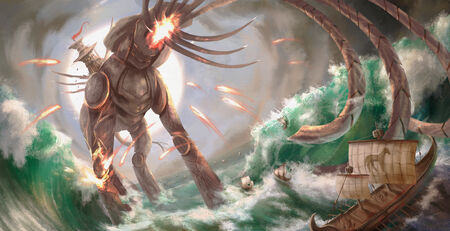 Age: Unknown, at least 2236 years by the present day

Attack Potency: Town Level (Did this. Decimated the majority of the Roman army and navy with little effort, and destroyed small towns and vistas it came across), likely City Level (Stated that it could have levelled the entire city of Rome. A machine constructed with the help of Robert Bumaro)

Speed: At least Peak Human to Superhuman (Described as moving slowly, yet its sheer size should allow it to move at this speed by simply walking) Faster attack speed with tentacles (Outmaneuvered a Roman fleet of ships)

Stamina: Very High (Powered by an unknown anomalous source from within. Never ran out of power over the course of the Punic Wars)

Range: Several dozen meters with Heat Manipulation (Boiled the seawater around it), Several hundred meters with trunks and mounted weapons.

Intelligence: Mindless (Must be piloted by a crew) possibly Sentient (Its last exploration log implied there are parts of it that had a mind of its own)

Weaknesses: Its joints are particularly less durable than its outer shell