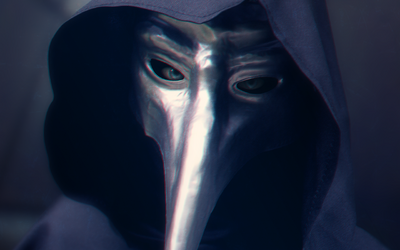 SCP-049 is humanoid in appearance, standing at 1.9 m tall and weighing 95.3 kg; however, the Foundation is currently incapable of studying its face and body more fully, as it is covered in what appears to be the garb of the traditional “Plague Doctor” from 15-16th century Europe. This material is actually a part of SCP-049’s body, as microscopic and genetic testing show it to be similar in structure to muscle, although it feels much like rough leather, and the mask much like ceramic. It was originally discovered in England, by local police. Mobile task force Psi-8 "The Silencers" responded to a suspected outbreak of reanimation anomalies. All civilians within a .5km radius were given Class A amnestics as part of the initial containment procedure.

SCP-049 does not speak, although it seems to understand English perfectly well, and is completely docile until it tries to perform surgery. SCP-049’s touch is invariably lethal to humans. After contact with SCP-049’s hand(s), the victim (hereafter referred to as SCP-049-2) dies within moments. SCP-049 will then attempt to kill all humans it can see in a similar manner, supposedly to avoid interruption, before returning to SCP-049-2. It produces a bag containing scalpels, needle, thread, and several vials of an as-yet-unidentified substance, from somewhere within its body (research has been unable to locate these tools when inside of SCP-049 through X-ray and similar techniques) and begins dissecting SCP-049-2, as well as inserting various chemicals into the body. After approximately 20 minutes, SCP-049 will sew SCP-049-2 back up and become docile once more. After a period of a few minutes, SCP-049-2 will resume vital signs and appears to reanimate. However, SCP-049-2 seems completely without higher brain functions, and will wander aimlessly until it encounters another living human. At that point, SCP-049-2's adrenaline and endorphin levels increase to approximately three-hundred percent as it attempts to kill any human beings it can find, before returning to its mindless state and wandering until it comes across more humans.

Classification: Euclid Class Anomalous Entity, Member of the Children of the Barrow

Attack Potency: Street level (Can harm and overpower physically peaked humans. Destroyed a desk and framework of a bed). Can ignore conventional durability via his lethal touch

Speed: Normal Human (Chooses to walk at normal speed instead of running)

Lifting Strength: Above Average Human (Able to lift a grown man off the ground with one hand)

Durability: Street level (Survived being shot in the abdomen several times and being electrocuted by a shock collar)

Intelligence: Genius (A highly skilled surgeon capable of performing an as of yet unknown operation on deceased victims that can bring them back to life as mindless zombies, is capable of speaking of multiple languages, but prefers Medieval French or English)

SCP-049 upon discovery
Add a photo to this gallery