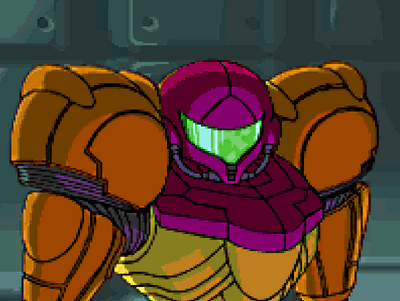 SA-X is an X Parasite mimicking Samus Aran, which developed after an X Parasite infected her while she was on SR388, copying not only her DNA, but her memories and the Power Suit fused to her body as well, forcing her to have it surgically removed to survive. Quarantined on the Biologic Space Laboratories, the infected remains of her suit transformed into a copy of Samus and escaped imprisonment to infest the entire station.

Age: Less than a week old

Powers and Abilities: Skilled Hand-to-Hand Combatant, Master Markswoman, and Pilot, Superhuman Physical Characteristics, Enhanced Senses (Its senses are exceptional normally, and it can further enhance them with its visors; can see invisible beings), Information Analysis (Its Scan Visor allows it to scan objects and beings to gain basic information on them and knowledge of their weaknesses), Absorption (X Parasites can absorb those they infect instantly), Precognition, Energy Shielding, Data Manipulation (Its Power Suit stores weapons and ammunition as data before they need to be used), Limited Transmutation (Can transform the data of its weapons into their tangible forms and can shape weapons such as its missiles from the atmosphere), Pseudo-Flight with Space Jump (Can jump indefinitely), Biological Manipulation, Energy Manipulation, Ice Manipulation, Plasma Manipulation, Technology Manipulation, Homing Attack, Forcefield Bypassing with the Wave Beam, Non-Physical Interaction (Spatial, Immaterial, and Elemental), Duplication (X Parasites can clone themselves to spread across an environment), Possession (Can take control of other beings as a Core-X), Power Absorption (Can absorb the powers of others by infecting them), Resurrection (X Parasites can resurrect deceased lifeforms by infecting them), Shapeshifting, Statistics Amplification (Can greatly boost its speed with the Speed Booster), Regeneration (Low-High; can reform from its Core-X), Immortality (Types 3 and 6), Resistance to Acid Manipulation, Antimatter, Cold, Gravity Manipulation, Heat, Matter Manipulation, Mind Manipulation, and Phazon (Has Varia Suit Samus' resistances)

Attack Potency: Planet level (Has access to Samus' arsenal in the Legendary Varia Suit, including Power Bombs, which can destroy planets, and fought and seriously pressured Fusion Gravity Suit Samus)

Striking Strength: Planet Class (Can injure Samus with its physical blows when transformed into its monstrous state)

Durability: Planet level (Impervious to Samus' complete arsenal until their final battle, only becoming vulnerable to the Plasma Beam)

Standard Equipment: Its Power Suit and its complete arsenal.

Intelligence: While it may rely on its instincts and operate animalistic, SA-X is incredibly intelligent, with an intellect on par with that of Samus thanks to copying her memories, learning and adapting throughout its hunt, growing deadlier and deadlier as it grows in intelligence.

Weaknesses: Weakened by Metroids, other than that, none notable.