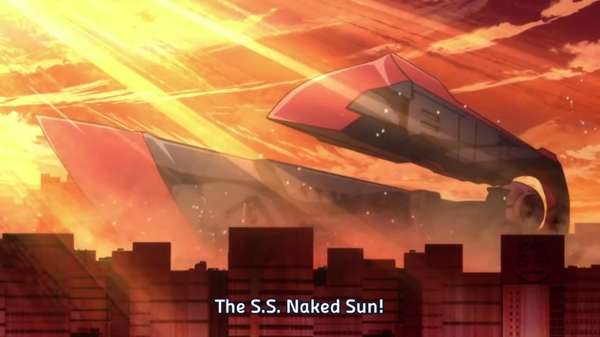 The S.S. Naked Sun is a warship created by the secret organization, Nudist Beach, to help them in their battle to combat Ragyo and her efforts to stop all life on Earth from existing. Besides the Scissor Blades, it is by far the most powerful creation they have ever made. Built with the entirety of member Kaneo Takarada's seemingly endless supply of wealth. The vessel's massive size can span an entire city block, travel at speeds greatly surpassing sound and wipe out threats to the entire planet. It helped assist Ryuko in her clash against the Primordial Life Fiber and was used to fight against her by the show's final villain Rei. Ryuko destroys the ship and puts it out of commission for good during the Graduation Ceremony.

Attack Potency: Country level (Penetrated straight through the Primordial Life Fiber, which has this level of durability, and nearly killed it)

Speed: Unknown (Depends on the pilot). Can go up to At least Massively Hypersonic+ speeds when used by Mako (Caught Ryuko, Ragyo and the Primordial Life Fiber off guard)

Durability: Country level (Tore inside the PLF without any scratch)

Range: Hundreds of Meters via size

Weaknesses: The ship's speed relies on the pilot's running speed, stamina and willpower.