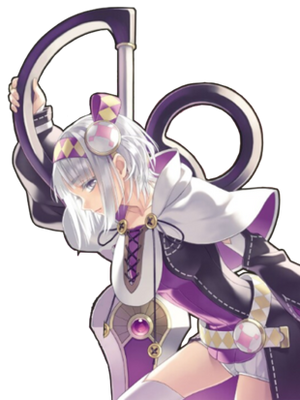 S'yne Lokk is a character from The Rising of the Shield Hero. The Sewing Set Hero of a destroyed world.

Powers and Abilities: Superhuman Physical Characteristics, Magic, Non-Physical Interaction (Magic can affect intangible beings such as ghosts), Limited Automatic Translation (Because of the destruction of her world, this ability tends to phase in and out, often causing her voice to sound like nothing but static, but she can still perfectly understand others), Absorption (Can absorb items and corpses into her scissors, gaining new skills and scissors), Item Drop (Can obtain random rare items and herbs from monsters absorbed into her scissors), Purification and Healing (Via various potions and medicines; which can cure people of curses, diseases, status effects ect.), Power Mimicry (Can change her weapon to copy the appearance and abilities of any weapon, related to sewing, she touches), Accelerated Development (Leveling; Stats), Statistics Amplification (Can increase her defense, speed, attack, and/or proficiency with a specific skill when using different scissors/sewing set tools), Teleportation (Via placing pins on objects or people she can instantly teleport to that location. Has a one hour cooldown), Thread Manipulation, Limited Wood Manipulation, Smoke Manipulation (Can create a smoke screen), Power Nullification and Sealing (Can use Skill Seal and Change Seal Wire), Life-Force Energy Manipulation, Enhanced Senses (Can sense other's life forces, properly determining the level of their strength and accurately gauge their location), Durability Negation and Damage Boost (Via Hengen Muso Style), Precognition (Can anticipate an enemy's movements by utilizing her life-force energy, allowing her to react to much faster characters), Forcefield Creation (Can create barriers which protect from Hengen Muso attacks), Resistance to Mind Manipulation (Can resist Motoyasu's Temptation skill)

Attack Potency: Large Town level (Although she is quite powerful, because of the destruction of her world her weapon has grown weak though she is still comparable to heroes without their weapons fully powered up, who should at least be comparable to the high priest's judgement)

Speed: Massively Hypersonic (Should at least be comparable to heroes without their weapons fully powered up, who can react to lightning bolts), Relativistic+ reactions (Can react to other heroes such as Naofumi, Raphtalia, Glass, and Ren)

Weaknesses: Is limited to her sewing set weapons.

Retrieved from "https://vsbattles.fandom.com/wiki/S%27yne_Lokk_(Light_Novel)?oldid=6310987"
Community content is available under CC-BY-SA unless otherwise noted.