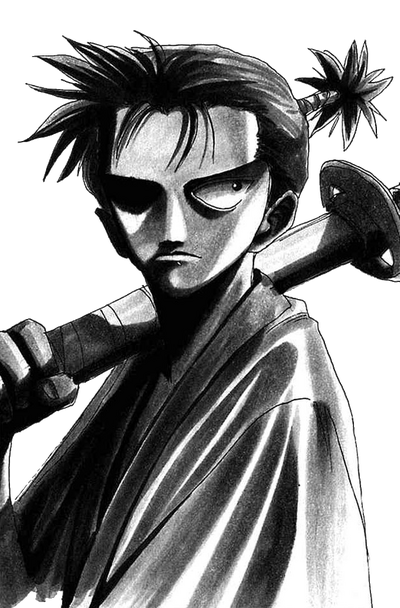 Monsters is a story about the young samurai Ryuma (a Zoro prototype) who aims to be the strongest swordsman in the land, a mysterious knight and master fencer Cirano and a legendary horn which can summon a dragon.

Ryuma is very powerful samurai from the country of Wano. His name became legendary when he killed a dragon in one hit. Dr. Hogback eventually found his corpse, and reanimated it using Brook's shadow.

Powers and Abilities: Superhuman Physical Characteristics, Master Swordsmanship (Was considered the "Sword God" during his life, his style resembled typical Japanese style swordsmanship with a katana, as a zombie he uses Brook's fencing style, though the potency of the techniques are amplified to a much higher level)), Haki (Advanced Armament user) | Same as before except for Haki, Air Manipulation (Can generate wind blades with sword slashes), Inorganic Physiology (Type 2), Immortality (Type 7), Immunity to Pain Manipulation (Zombies are stated to be unable to feel pain in any way)

Attack Potency: Unknown (Easily decapitated a real dragon from legend of Wano, was the strongest man in the world at his time) | Large Town level (Stronger than Brook and defeated him without fighting seriously. Fought Zoro on even grounds, was also able to slice a solid stone huge roof off of a large building with a casual swing of his blade)

Stamina: Unknown, should be extreme given One Piece standards | Limitless, does not feel pain or fatigue due to his zombie physiology.

Intelligence: Highly adept and experienced swordsman able to match someone as skilled as Zoro.

Weaknesses: None notable | Can be purified by salt and fire

Note: Little is known about the real Ryuma, as he has so far only appeared in Oda's one-shot, Monsters (which is canon to One Piece), and as he lived in a timeline well before the current story, his fighting strength is tricky to determine even though he was the strongest man in his time.