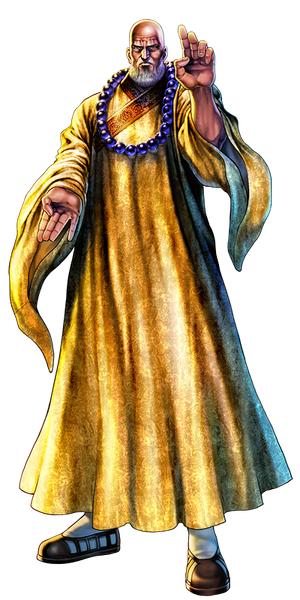 Ramon Kasumi, later known as Ryūken, was the 63rd Successor to Hokuto Shinken, the half-brother of Kasumi Kenshiro, and the father and mentor of Raoh, Toki, Jagi, and Kenshiro.

Powers and Abilities: Superhuman Physical Characteristics, Master of Hokuto Shinken, which allows him to target and hit someone's pressure points for various purposes (Ranging from causing them to explode to manipulating their movements to healing them), Aura, Chi Manipulation, Can copy others martial arts styles after seeing them once, Memory Manipulation (Some of his techniques allow him to change or erase the memories of victims), Regeneration (At least Low-Mid), Sleep Manipulation (Can put people to sleep with by pressing their pressure points), Death Manipulation (Can bring about death by pressing a persons pressure points), Instinctive Reaction (Hokuto Shinken possesses a technique that counters a technique that focuses on dodging attacks via subconscious reflexes, Muso Tensei is described as using a blank mind), Resistance to poisons, Resistance to Clairvoyance (Users of the Hokuto arts can bend their fates how they choose, making it difficult to read their destinies)

Attack Potency: Small Country level, higher with Tenryū Kokyū Hō (Initially stomped Raoh in their fight before the events of the series, losing only due to his illness, comparable to his brother and his other students)

Speed: At least Massively Hypersonic, likely higher with Tenryū Kokyū Hō (Was able to blitz Raoh in their fight before the events of series, comparable to his brother and his other student)

Stamina: Extremely high (As successor of Hokuto Shinken, his stamina must be comparable to the likes of Raoh and Kenshiro)

As the 63rd successor to Hokuto Shinken, Ryūken is a master of the art, and should know nearly all of its techniques.

Retrieved from "https://vsbattles.fandom.com/wiki/Ryuken?oldid=5840442"
Community content is available under CC-BY-SA unless otherwise noted.