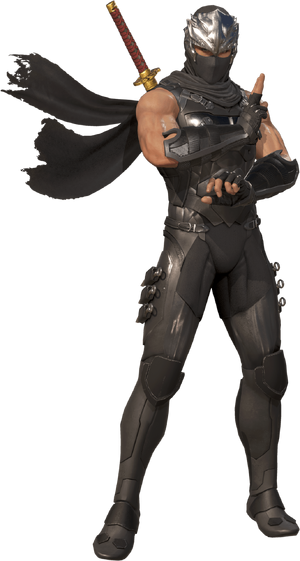 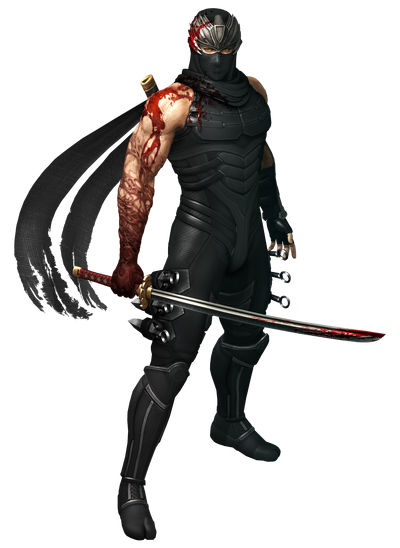 The protagonist of the Ninja Gaiden series and born into the Hayabusa Ninja Clans lead family, Ryu often takes the leadership role when is father Jo is away, Ryu Hayabusa is the eponymous example of a modern-day ninja. His black falcon outfit's sleek design is reminiscent to that of the modern special ops agent; still, his tabi boots, ninja headpiece, mask, scarf, and shin/forearm guards are representative of the ancient ninja warrior. In high contrast to his deadly appearance, beneath the cover lies a handsome man capable of gentle expressions even, while still in his early 20s, Ryu's personality is that of a wise, composed man far older than himself. With this level of maturity, Ryu is perfectly able to act gentle and caring towards his relatives and friends, and very cold and deadly towards his enemies without hatred. Ryu is also a playable character in the Dead or Alive series, and is a good friend and ally to Hayate, Ayane, and Kasumi and will always come to their aid. He is often considered the most powerful ninja in the world.

Tier: At least High 8-C | At least 7-A, higher with combination attacks. Likely 6-B to 6-A | 5-B with True Dragon Sword and Dark Dragon Blade

Powers and Abilities: Superhuman Physical Characteristics, Enhanced Senses (Can use a 6th sense to sense new enemies, incoming attacks and directions for him to reach his goal. Has sharpened senses and thought process), Regeneration (Mid-Low; Healed slashes that critically harmed him by the Hayabusa Spirit. However, he cannot heal all his wounds and need to rest in order to happen), Teleportation (Can teleport short distances via Blink), Weapon Mastery (Is a master swordfighter and archer. Is amaster of virtually every type of weapon), Stealth Mastery, Martial Arts, Acrobatics, Surface Scaling (Can cling, climb on and run up walls), Magic (Is a master level in the art of ninja magic, also known as Ninpo), Projectile Reflection (When carefully timed, Ryu can deflect projectiles back at enemies with a sword slash), Invisibility (Can turn himself invisible in a smoke-filled area), Elemental Manipulation (Ryu learned to channel his inner body heat into a fireball projectile, he can gather the cold elements of the air creating big tornadoes of ice, summon huge fireballs or magnify his own bio-electricity and shoot outward towards surrounding targets), Fire Manipulation, Ice Manipulation, Electricity Manipulation, Telekinesis (Used to lift a platform), Summoning, Healing (Can summon several blue healing essence orbs in order to heal himself), Air Manipulation (Can summon tornadoes and swing his sword fast enough to produce vacuum wave cuts), Time Stop (Can use a hourglass that stops time around him. Lasts for 5 seconds), Duplication (Can summon a phantom double of himself, which will follow all of his movements and mimic his actions as a result), Illusion Creation (Via Art of Substitution), Ryu has also gained the ability to assume the powers, abilities, and form of anyone he sees, these are some of the arts of Ninpo that Ryu has mastered completely, Ryu is able to make himself immune to everything whilst casting Ninpo, Smoke Manipulation (Via Smoke Bomb), Transformation/Shapeshifting (Can transform into a tornado or a falcon, enabling him to travel anywhere around the world), Resurrection (Is able to tap into his guardian animal spirit "Hayabusa Spirit", that resurrects Ryu after he dies. Via Talisman of Rebirth), Statistics Amplification (Can increase his attack power and defence via Armlets), Resistance to Life-Force Absorption (Was still fine when the Sword of Chaos attacked him. The Sword of Chaos has been stated to suck up the life force), The Hayabusa Spirit grants Time Stop (Can stop the flow of time), Black Hole Creation (Is capable of creating small-scale black holes that quickly dissipate), jumping thousands of feet in the air, etc.

Attack Potency: At least Large Building level (Beat the possessed Statue of Liberty and many other tremendous demons. Has canonically taken on tanks and helicopters with longbows, etc.) | At least Mountain level (When used on Yaiba, Inazuma Drop destroyed the underground of a mountain at an equal size), higher with combination attacks (Can use a mountain-busting ninpo with a partner). Likely Country level to Continent level (Defeated the Demon Statue in the NES game, which was considered a planetary threat. Capable of destroying an entire country and above using nuclear weaponry on. Also defeated the Tengu of Destruction, who dispersed a large number of clouds) | Planet level with True Dragon Sword and Dark Dragon Blade (With the True Dragon Sword, Ryu was able to kill off Vigoor and one of the Dark Dragons. Vigoor could casually cause an extensive series of solar eclipses and split the world in half, and the dark dragons who are on par with Vigoor consumed worlds in darkness. Tengu has feats on a comparable scale as well, Ryu also fears using the True Dragon Sword because he wishes not to destroy the Earth)

Speed: Hypersonic (Can avoid/block bullets and missiles from mini-copters and jet crafts, devastating attacks from demons which can destroy armies with ease. Has escaped from a volcanic eruption. Can move short distances so quickly he leaves afterimages of himself), Massively Hypersonic reactions/combat speed (Was capable of dodging and reacting to Clancy's, Garuda's and Malth's lightning)

Lifting Strength: Class M (Overpowered The Goddess, who is this big)

Durability: At least Large Building level (Fought enormous building-sized demons. Can drop immense heights without injury or death) | At least Mountain level (Survived being at ground zero of an explosion that consumed most of Mt. Fuji. Can tank hits from something that can destroy multiple mountains in one shot), possibly Country level to Continent level (Can take hits from beings remotely comparable to Vigoor and Tengu) | Planet level with True Dragon Sword and Dark Dragon Blade

Stamina: Superhuman (Is a skilled ninja and can fight against other highly skilled fighters. Can also run great distances without any sign of fatigue or tiredness)

Range: Extended melee range with his sword, several hundred meters with projectiles and other weapons

Intelligence: Above Average (Is a skilled combatant, very knowledgeable in the field of weapons and a master of Ninpo magic)

Weaknesses: Needs spirit points for some of his weapons, cannot spam his ninpo, healing takes time for him

Note: Not to be confused with the similarly - named character from Street Fighter.