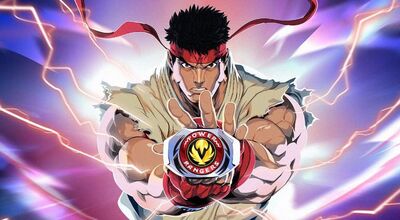 Ryu is a playable character in the game Power Rangers Legacy Wars. As Rita Repulsa's hold on the Morphin Grid stretches across multiverses, Ryu senses the disturbance too late before he, along with his allies and enemies, are sucked into the Grid, pitted against warriors from the Power Rangers multiverse.

On July 19th, 2018, a new update was released that gave Ryu a second form, becoming the Ryu Ranger. As the Ryu Ranger, Ryu's amazing abilities are amplified through his newly-forged connection to the Morphin Grid via the Hawk Power Coin.

Powers and Abilities: Superhuman Physical Characteristics, Chi Manipulation, Energy Blasts, Master of Ansatsuken | When morphed, his strength, durability, and speed are all increased considerably, Fire Manipulation, Durability Negation (His Sokuto Rush deals the same amount of damage regardless of the enemy's durability statistic)

Stamina: High, can fight even while heavily injured | Very high

Weaknesses: If he takes significant damage from his opponents, he can demorph without commanding his morpher to do so, as with the cast of most Rangers

Note: Not to be confused with his canonical version Ryu (Street Fighter)