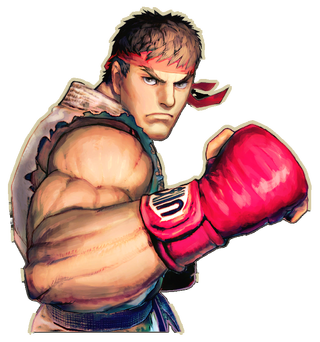 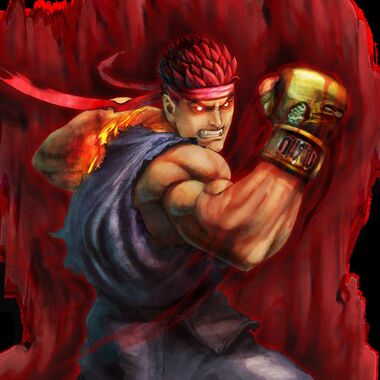 Ryu (リュウ or 隆 Ryuu) along with Akuma, both made appearances in Asura's Wrath. Ryu appears as a DLC-only character with his own fleshed out episode, titled At Last, Someone Angrier Than Me.

Age: Probably in his late 20's

Powers and Abilities: Superhuman Physical Characteristics, Ki/Chi Manipulation (Can channel his Ki into powerful attacks once in a while, such as gaining the height from Shouryuuken or spinning during the Tatsumaki Senpuukyaku), Master of a martial arts style with roots as an assassination art known as Ansatsuken (The style appears to be somewhat based on kyokushin karate, as the traditional kyokushinkai techniques can be seen in the character's fighting style), Self-Sustenance (Type 1. Can survive in space), Resistance to Extreme Cold and Cosmic Radiations | Satsui no Hadou (Surge of Murderous Intent. An innate Ki which Ryu possesses, increases his fighting capabilities and the strength of his ki attacks, can also use the "Raging Demon", the same move that Akuma used to destroy Bison in Street Fighter II), An attack that can destroy the host's Soul if they do not empty their Soul from all negative feelings such as Rage, Hate, Darkness and Desires, Fairly good acrobatic

Standard Equipment: His fighting gloves and his long red headband.

Weaknesses: Can lose his calm sometimes, Ryu believes in showing mercy to his opponents, does not believe in killing his opponent, afraid of spiders (he once woke up with one in his mouth).

Note: This profile is not in continuity, either in Street Fighter or Asura's Wrath. It's a completely separate history DLC (Non-Canon to Asura's Wrath game).