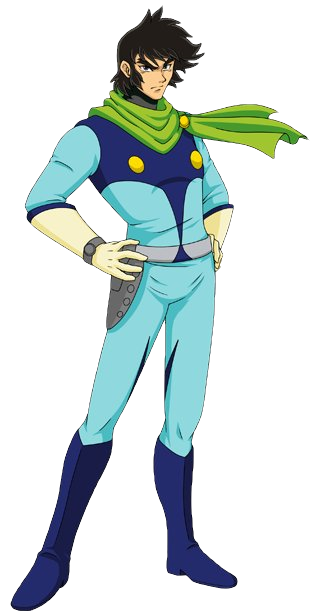 Ryoma Nagare (流竜馬 Nagare Ryōma) is a martial artist who was the first to be recruited by Dr. Saotome and was one of the first to witness the true nature of Getter Rays. Ryoma is the primary pilot of the Getter Machine Eagle, and head pilot of Getter 1. Brash, hot-blooded, and possessing a fierce disposition, Ryoma often draws the attention of Dr. Saotome due to his resilience and strength, and as a result, is brought on board with the crew of the Saotome Institute to help pilot Getter Robo. As a well-trained master of martial arts, Ryoma displays an almost superhuman level of strength and resistance, capable of taking hard blows from machines, deep scratches from Reptiloids, and removing knives impaled in his body by simply flexing his muscles. Complementing this durability is a monstrous level of strength and stamina, only further bolstered by his style taught to him by his father. After merging with the Getter Energy he became a pilot of Getter Emperor and gained the ability to understand the past, present, and future showing extensive knowledge of the events taking place in the present time, and those that will occur much later, as well as the demonstrated ability instantly transferred anywhere in time-space.

Powers and Abilities: Superhuman Physical Characteristics, Master of Nagare-ryu (Style of karate, known for his pragmatic and brutish force), Mastery of any weapons and outstanding skills of piloting mecha, With Getter Energy he has access to ability amplification of his own statistics, Absorption (Can absorb Getter Energy almost infinitely), Aura | Same as before, along with High Resistance to Pain (Completely ignores any gunshot, stabbing and cutting wounds in battle) | Same as before, along with access to ability Teleportation, Time Travel, Survive in space, Cross between various dimensions and universes, Implied to be Nigh-Omniscient (As part of Getter Rays and pilot of Getter Emperor, he governs over and has absolute control over space-time, life, evolution, and the fundamental laws of the universe), Immortality (Type 6 and 8, plus Type 1 after rebirth. Getter Emperor instantly recreates his pilots if they die), Self-Resurrection via Getter Energy, Summoning (Can summon Getter Emperor), Extrasensory Perception (As a Getter Warrior and a part of Getter, he can sense any changes on a universal level)

Speed: Superhuman | At least Subsonic physically, with at least Supersonic reactions/combat speed (Able to easily dodge gunshots, even if the gun is attached to his head, can keep up with Hayato) | Unknown via Getter Energy (Instantly travels between dimensions and universes)

Striking Strength: Wall Class physically (Can casually smash Dinosaurs head, who are capable of destroying walls, with his bare hands) | At least Wall level physically (Able to defeat the enemy much exceeding his strength in one blow) | Unknown. Varies via Getter Energy. Self-Resurrection and Immortality makes it hard to kill him

Range: Standard Melee Range physically, dozens to hundreds of meters with various edged weapons and firearms | Unknown via Getter Energy (Made the universe to quake from his voice)

Weaknesses: Excessive use of Getter Energy can drive him to a temporary loss of sanity | None

Deep Red
Add a photo to this gallery