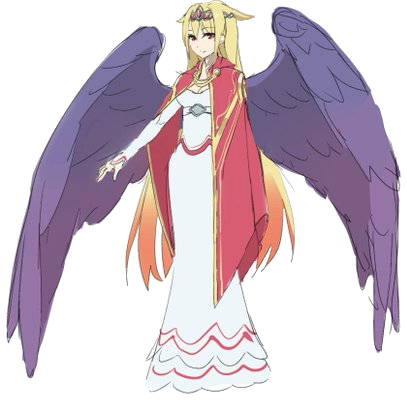 Ruphas Mafahl is the main protagonist of A Wild Last Boss Appeared. He was a top tier player in the MMO game Exgate Online. His character was Ruphas Mafahl, a beautiful black winged flugel with massive popularity among the players as the unofficial last boss that took over the ingame world. After playing through a staged event where he was betrayed and defeated by his fellow guild mates, he was given a choice to take on a new role by Alovenas, the avatar for the game's administrators.

He instantly finds himself in the world of the game in Ruphas' body, several centuries after she was sealed. Due to a hero summoning gone wrong, the seal placed on her was broken. With the protagonist having no clue what else to do, he decides on gathering up Ruphas' minions and finding out if his guild mates, all of whom are now equally legendary figures, were also moved into the game.

Superhuman Physical Characteristics, Aura, Power Nullification (Can disperse the mana of a specific area, preventing the use of magic. Can completely negate all physical damage under a certain value. Can cut through divine magic and arcane magic), Willpower Manipulation (Crushed the will of 7 millions warriors who stood to confront her), Information Analysis (Can see her opponents level, remaining HP, and their stats), Enhanced Senses (Has flawless vision which lets her even see birds when moving at high speeds. Has a visual acuity of 12.0, allowing her to distinguish the silhouette of an insect less than one centimeter at a distance of twenty meters. Can hear things 300m away. Can detect traps that cause instant death), Longevity (Flugels have a lifespan of 1,500 years), Photographic Memory (Has photographic memory), Avatar Creation (Can create avatars of herself), Forcefield Creation (Can create barriers), Transmutation (Her mana can mutate living creatures who come into contact with it. Can transmute sword out of the ground), Extrasensory Perception (Can sense people), Telekinesis (Has physic abilities that allows her to constrain opponents and move objects without touching them), Flight, Statistics Amplification (Can increase attack power and defense), Statistics Reduction (Can reduce her opponents defenses, attack power and speed. Can decrease the magic power of all within an area), Damage Reduction (Her Overcoat of the Seven Luminaries reduces 50% of the damage of all attributes), Power Bestowal, Regeneration (Mid-Low), Creation, Pressure Points (Can penetrate defenses), Reactive Power Level (With her revenge skill, she gets stronger the more damage she takes), Gravity Manipulation (Solar Flare possesses a strong gravitational pull, thus is hard to avoid), Fear Manipulation (With Coercion she can cause her opponents to shake in fear), Supernatural Luck (Due to her high luck stat she frequently gets critical hits on her opponents), Social Influencing, Vibration Manipulation (Can create shock-waves with her attacks), Attack Reflection, Damage Boost, Healing (Can use divine magic to heal), Resurrection (Can resurrect the dead), Probability Manipulation (Shine Blow is a skill which grants absolute accuracy. Flash is a skill which gives absolute evasion. Smash is a skill which always inflicts a critical hit), Light Manipulation, Space-Time Manipulation (Can distort space-time with X-Gate), Portal Creation (Can create holes in space which then turn into a gate that connects to create a temporary pathway to another location, effectively turning the distance between the two locations into zero), Dimensional Travel (With X-Gate she can bypass the space-time continuum to travel to other dimensions), Genius Intelligence, Resistance to Magic, Willpower Manipulation, Fear Manipulation (Can resist her own Coercion), Statistics Reduction (Negated the Demon King's aura that reduces attack power), Plot Manipulation (Exists outside the Goddess Alovenas scenario), Fate Manipulation (Flugels have a predetermined evolution path by Goddess, a form that one should be. Ruphas ignored that path and transformed on her own), Mind Manipulation (Orm's mental skills were negated by Ruphas equipment that granted immunity to abnormal statuses), Memory Manipulation (Dina's memory manipulation doesn't work on her. The Goddess can't manipulate her thoughts and memories), Madness Manipulation (Type 2, Resisted Aigokeros madness manipulation that affected an entire country), Heat Manipulation (Comparable to Benetnash who has no issue sitting on magma and had no problem swimming inside the planet's mantle. High level individuals can withstand -100 degrees Celsius with no issues), Possession (The Goddess cannot possess her), Empathic Manipulation (The Goddess who can control emotions can't control her, as like Benetnash, she is outside her influence), Law Manipulation (Broke through the rules of the world created by the Goddess herself), and Poisons (Scorpius poison has no effect on her)

All previous abilities but greatly enhanced

Attack Potency: Small Planet level (Along with the Demon King, she shook the entire world causing distant forests to shake, the seas to rage, the ground being ruptured, avalanches on snowy mountains, countless rocky hills to collapse and typhoon like winds. Can crack a planet in a single hit. She is also powerful enough to crack the planet in two, which requires this much energy. Comparable to Benetnash who destroyed a small planet) | Planet level (Punched through the Dragon King's breath attack which could destroy the entire planet. Level 1500's can deal more damage than a planet like Midgard can bear and shatter it, shatter a planet with a single kick and even a mere shockwave of full-strength arcane magic can shatter countless planets and can even cause cosmic-scale explosions. Can shatter planets, and can destroy a planet with single arcane magic) | At least Planet level, possibly Solar System level (Far superior to before, stated by the author to probably be able to destroy a solar system at the very least)

Stamina: High (Fought the heroes for 1 day and night)

Intelligence: Genius (Having reached Level 1000 on her own, the peak of strength set by the Goddess, Ruphas is considered a genius, and she can even be considered a prodigy. She was also able to concoct a plan for events 200 years in advance)

Weaknesses: Due to not being able to ever receive love from her father when she was still young, Ruphas is extremely nice and easy-going to those who are close to her, so once she registers someone as close to her, she pampers them to no end and lets slides most of their mischievous deeds. This leads to her hesitating to harm those she cares about in combat and not being able to use her full power.

Meteor Kick
Add a photo to this gallery