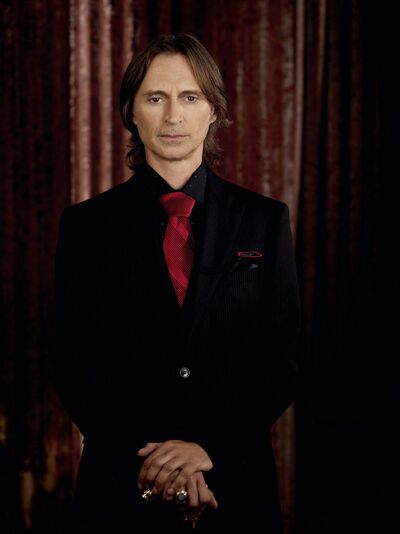 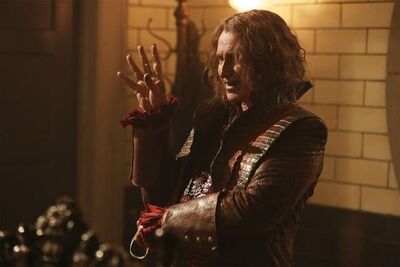 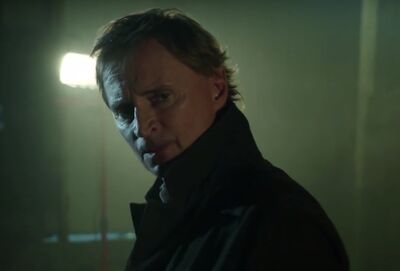 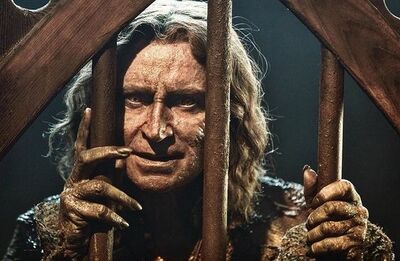 Rumplestiltskin, also nicknamed Rumple, is one of the main characters of Once Upon a Time. Rumple was once a normal man turned evil by the Dark One's magic. After losing his son, he became obsessed with making deals, and, more so, collecting in on them, most of which aided his ultimate goal of being reunited with Baelfire. In the town of Storybrooke, Maine, after the casting of the Dark Curse, Rumplestiltskin lives as Mr. Gold, the enigmatic owner of the local pawn shop, as well as the town itself. Gold remains aware of his life before the curse and plays a key role in breaking it so that he can leave town and find Bae, with his need to satisfy revenge often getting in his own way and leading to events such as him providing the town with magic, which he views as power. However, unforeseen circumstances lead to Baelfire's death, and Rumple is left at a loss. His thirst for power could be his undoing, threatening dearly the relationship he has with his true love Belle.

Name: Rumplestiltskin, Mr. Gold, Weaver, Rumple, Crocodile, The Beast, The Demon (By most of his enemies), The Imp (By Captain Ahab)

Superhuman Physical Characteristics, Extensive Magical Knowledge, Investigation Skills, Skilled Manipulator, Master Planner, Precognition, Enhanced Senses, Can see through illusions and disguises, Resistance Negation (Can get past most of his foes' resistances), Social Influencing (Has constantly showed to be able to trick and persuade most of the series' characters), Corruption (Type 1), Skilled Swordsman, dagger and cane wielder, Skilled Marksman, Magic, Curse Manipulation, Clairvoyance, Immortality (Types 1, 3, and 8, reliant on the Darkness), Poison Manipulation (Can create antidotes to the deadliest poison ever known - dreamshade - and also magically slow down its effects. He can also create powerful poisons just by thinking and can poison enemies with nothing but a gesture), Fire Manipulation, Heat Manipulation, Time Stop (Through the spell he put on the Dark Curse's scroll), Water Manipulation, Invisibility, Multiple Personalities, Necromancy, Hellfire Manipulation, Teleportation (Can transport himself and others between long distances in an instant, usually in a cloud of purple smoke), Dimensional Travel, Portal Creation, Biological Manipulation (Showed this when he removed the tongue of a soldier), Fear Manipulation, Life Manipulation, Can identify someone's weakest point with Merlin's Gauntlet, Age Manipulation, Darkness Manipulation, Flight with a broom (Taught this skill to Zelena), Petrification, Soul Possession, Self-Sustenance (Type 3), Telekinesis, Regeneration (At least Low-High, possibly Low-Godly with preparation: Superior to Zelena), Cloth Manipulation, Healing (Mid, fixed Jack's broken skull), Text Manipulation, Memory Manipulation, Heart Extraction (Can magically penetrate a person's chest and literally remove the hearts of other living beings without killing them and use them to control the owner or kill them by crushing the heart), Size Manipulation, Soul Manipulation (Can affect souls and even remove them from bodies they are possessing), Shapeshifting (Can take the form of any person he thinks of, usually a cloud of purple smoke will engulf him when he is transforming into another or transforming back to himself), Thread Manipulation, Enchanting Objects, Transmutation (Can spin straw into gold, transformed a man into a pig, a knight into a rose, another man into a slug, a sorcerer into a mouse, a sailor into a rat, and can likely turn people into anything he wants to), Homing Attack with the Magic Bow (It never misses its target), Earth Manipulation (Can let people sank in the ground and create earthquakes), Animated Shadow, Summoning, Matter Manipulation (Can create things out of thin air. Disintegrated Gaston's padlock and Snow White's sword), Death Manipulation (Scaled to Regina), Paralyzing of others (Can freeze any living being), Sleep Inducement (Can put the others to sleep with a gesture), Causality Manipulation, Spatial Manipulation (Made a coin purse hold much more money than its natural capacity. Should be able to replicate everything Madame Leota, Robin and Cora can do), Clairvoyance, Extrasensory Perception, Shield Creation, Electricity Manipulation, Technopathy (His magic also allows him to manipulate technology being capable of changing the security footage in jail from when he killed Zelena), Power Bestowal (Gave Cora the ability to use magic), Weather Manipulation , Energy Projection, Resurrection (If Rumple dies without having passed the title of Dark One to another being, he can be resurrected by the Vault of the Dark One, if another person decides to open it, giving up his/her life as a result), Plant Manipulation, Power Mimicry with the Black Fairy's wand, Power Nullification and Power Removal (Can nullify someone's capacity of hurting an specific person, making this person's powers useless and turned Regina into someone else, removing all her powers), BFR, Absorption with the Sorcerer's Hat, Telepathy, Sealing with the Box of Pandora, the Urn and the Apprentice's wand, Duplication, Reality Warping, Limited Metacognition (Rumple is capable of knowing that someone is viewing him via mirror or a projection. He also knows that there are many timelines and many "Rumplestiltskins" through the realities. However, he cannot break the fourth wall)

Resistance to Mind Manipulation; Matter Manipulation, Empathic Manipulation; Poison; Absorption; Disease, Broadway Force (The Dark One does not sing); Ice Manipulation and Cold Temperatures (The Dark One does not get cold); Sleep Inducement; Dark Magic (Powerscalling from Zelena), Paralysis; Gravity Manipulation and Time BFR/BFR (Unmoved by the Time Vortex Emma summoned in his vault, which pulled Elsa into the future); Precognition (Dark Ones cannot be seen in the future, as shown when Merlin fails to determine what will be Emma's next step and when he did not know any of Nimue's intentions); Soul Manipulation (One cannot remove his heart if he did not allow it. The Apprentice required a special incantation to do so. Also, his soul is attached to the Darkness - the source of his powers -, which could only be removed from inside of him with a very specific incantation and which cannot be destroyed while Dark Magic still exists across the realms) and Transmutation (His magic prevents him from being transmuted)

All former powers on a significantly higher scale, Limited Fate Manipulation with the Shears of Destiny, Snow Manipulation, Pocket Reality Manipulation, Death; Soul and Mind Manipulation; Sealing; BFR; Immortal Killing with Acheron's Water (Touching the water will reduce anyone to a mindless, tormented husk, and trap anyone inside the Acheron), Light Manipulation, Dream Walking with the Sands of Morpheus, (Most likely via deals)

All previous plus Resistance to Death Manipulation; Possession; Madness and Mind Control (Holds likely 30 Dark Ones within himself, all of which can possess people. Nimue lives inside all the Dark Ones and demonstrated to be able to control their minds, as she did with Hook and Emma. Earlier in the series, Rumple became mad by having two minds inside of him. Now, he's got 30 and is well of mind); potentially some degree of resistance to Reality Warping (While visiting a bridge said to be older than time itself, which can make wishes come true in exchange of a sacrifice, Rumple tried to free himself from the dagger by throwing it into the river below and wishing to lose his magic and become a mortal man. But, to his disappointment, the dagger magically returned to him, proving that the wish could not be granted), Power Removal (Hades was unable to stop him from using his powers) and Internal Damage (Completely unharmed by Facilier's voodoo)

All former powers on an immensely higher scale, Law Manipulation (Unchecked by the Laws of Magic, Rumplestiltskin claimed to be able to rewrite the rules of reality)

All former powers on an unfathomable higher scale, Plot Manipulation

Attack Potency: At least Building level physically (Able to break a neck with a single hand. Easily defeated Charming. Killed Beowulf, who could withstand attacks from ogres, by snapping his neck). At least Island level+ (Far superior to Zelena, Regina, Emma and Cora. Stronger than all the Queens of Darkness together, which includes Ursula, who was stronger than Poseidon), likely Large Country level (Should be superior to Ingrid and comparable to other Dark Ones such as Nimue and to Merlin) with magic | At least Large Country level, likely higher with magic (One of the most powerful beings in the OUAT verse. Stronger than Jafar, who could wipe Agrabah off this earth; Ingrid, who froze all of Arendelle; The Evil Queen, who created Storybrooke with the Dark Curse; Peter Pan, who had control over all Neverland; Ursula, who controlled a whole sea; Merlin, the first wizard and the Black Fairy. The Author admitted that he was the most dangerous of all characters of the storybook. Even respected, and somehow feared, by a deity like Hades, who describes him as a "worthy rival to his hot throne." Much more powerful than virtually any amount of fairy dust, which even with a small amount could do this). Can ignore conventional durability with Heart Extraction, Transmutation, Fire Manipulation, Petrification, Smite, Death Manipulation, Matter Manipulation and others abilities | At least Star level (Used a piece of the Olympian Crystal to become one with all the magic of Storybrooke, and as such should be far superior to the genies, which are capable of creating entire alternative realms). Can ignore conventional durability with Heart Extraction, Transmutation, Existence Erasure and others abilities | At least Star level (Merlin claimed that an unrestricted Dark One would pose a threat to any realm. Comparable to an unrestricted Black Fairy, who could transcend the Laws of Magic and destroy every realm) | At least Solar System level (Created hundreds of realms with a mere hand motion)

Speed: At least Subsonic+ (Faster than Nimue). Can teleport

Lifting Strength: At least Class 25 with Telekinesis (Superior to Regina)

Stamina: Extremely high (The power of the Darkness keeps the Dark One energized and thus they don't need sleep and don't suffer from sleep deprivation)

Intelligence: Genius (He has an extreme knowledge and understanding of spells, potions, and other topics related to magic, allowing him to do impossible things for common magic users. Created many spells and charms and was also able to put True Love into a bottle. Could see the difference between a true and a false magical page when nobody else could. So smart that he could change the purpose of the Dark Curse, and made it unstoppable. Created many spells by himself, something very rare. He is also a highly skilled lawyer as Mr. Gold, and a very clever and smart detective as Weaver. Able to see people intentions and lies without much thinking. Tricked many of the series' characters with ease)