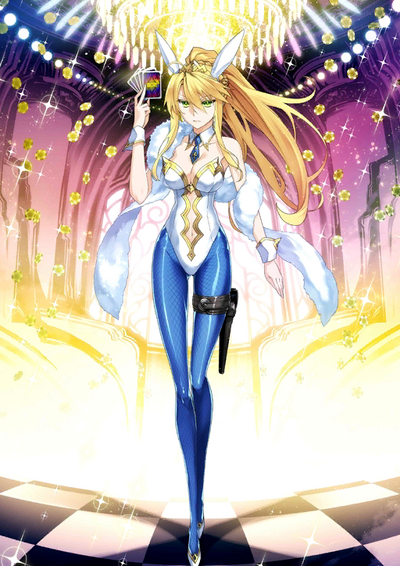 Ruler is a Ruler-class Servant able to be summoned by Ritsuka Fujimaru in Fate/Grand Order.

Ruler's True Name is Artoria Pendragon, better known as King Arthur, the "Once and Future King" and a legendary hero of Britain. She became king by pulling the sword Caliburn from the stone. While she is most popularly known as the wielder of Excalibur, the strongest holy sword, this Artoria instead originates as an offshoot of her Lancer self, her class being changed to that of a Ruler for Summer, transforming her into the Swimsuit Lion King, the one who reigns over Casino Camelot, the patron of the battle royale match of the Swimsuit Swordmasters, Lancer Artoria who changed into Summer Attire.

Powers and Abilities: Superhuman Physical Characteristics, Martial Arts, Weapon Mastery (Skilled Card wielder), Energy Projection, Light Manipulation, Flight (With Bright Ehangwen), Supernatural Luck, Minor Fate Manipulation (Servants with B-rank Luck or higher can change their own fates to evade inevitable outcomes such as having their hearts destroyed by Gáe Bolg), Power Modification (Freely picked her own skills upon changing her saint graph), Summoning (Capable of summoning Ehangwen, the legendary castle of King Arthur as a giant ship), Law Manipulation (Create laws in the casino and even throughout the whole Las Vegas that can only be bypassed by the permission of Artoria herself), Creation, Reality Warping and Sealing (Warped Las Vegas into a singularity, also as a cage for Tenma Musashi to seal her until the end of the story singularity. Created her own casino, also likely the other casinos), Forcefield Creation (Was capable of deploying invisible shields), Aura (Her presence alone will make someone feel as if the atmosphere is pushing them down), Pocket Reality Manipulation (Her casino is a pocket reality), Limited Power Nullification, Preparation and Servant Physiology

Attack Potency: Island level (Able to fight against Katsushika Hokusai. Has C-Rank strength, making her comparable to Shirou Kotomine and other combat-ready Servants, such as Archer), Large Island level with Bright Ehangwen (As an A+-Rank Anti-Fortress Noble Phantasm it should be comparable to Bölverk Gram). Likely Continent level with Rhongonomiad (Still has her Rhongonomiad as a parasol and likely has the same firepower as her traditional counterpart) | Unknown, likely Large Island level (Artoria is comparable to the forces of 5 Servants and able to stomp any Servants that she can come across, also superior to Numeral of the Saints Gawain boosted even further by Aloha Shirt. Managed to fight against Summer Hokusai at the end of Summer 4, who can win against Tenma Musashi, a counterpart of Zero Musashi). Likely Continent level with Rhongonomiad

Speed: Massively Hypersonic (Has B Rank Agility making her comparable to Saint Martha and Shirou Kotomine) | Infinite (Comparable to Tenma Musashi and Hokusai)

Range: Standard melee range to dozens of meters with cards, Kilometers with Bright Ehangwen (Has a maximum range comparable to Excalibur)

Intelligence: Aside from being a bit more laid back due to her subconscious thought that it’s okay to relax since she’s off-duty, Artoria is essentially the same as her Lancer self mentally. However, as a result of trading her normal weapons for cards, she is reigned as the strongest dealer in Vegas, with her instinct, insight, and spiritual power. Before her, any tricks are laid bare, and even the luckiest are brought to their knees.

Bright Ehangwen: Be Brilliant, Our Radiant Hall: The Noble Phantasm of Artoria Pendragon as Ruler. A high mobility reception hall that conquers the surface of the water, temporarily embodies Ehangwen, King Arthur's Hall, and shoots an oversized magical light onto the entire enemy line, the biggest attack of Artoria Ruler, Lion King of Swimsuits. It is unclear whether the past Ehangwen had such navigational ability and artillery ability, but according to her own words "it has never done that" or "it cannot do that". There is a certain pattern. On the other hand, regarding bombardment, there is a suspicion that "Is it actually done with the loaded Rhongomyniad" or "Is it actually the same Noble Phantasm as Lancer?" She is silent about this.