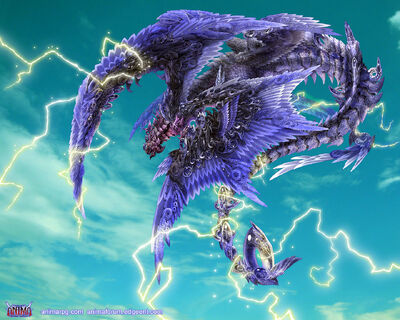 If the gods flew through the skies of Gaïa, they would seem like Rudraskha – the Great Aeon – the embodiment of the concept of storms, created from the fundamental idea of the power unleashed by storms. It is a single entity, venerated in terror since the first lightning bolts lit up the night sky. Rudraskha is one of the largest known Aeons, so some scholars have chosen to call it the King of the Aeons. While its kingship is quite unlikely, because these entities lack anything remotely resembling an organization, the truth is that Rudraskha’s power is so great that it could just be possible.

As a being created from concepts, Rudraskha has always resided in the outer circle of the flow of souls, and only rarely has he needed to appear in Gaïa. However, during the Great War, one faction of Devahs devised a system to attract and control its actions with the intention of using it to lead their forces. Thus, they conceived of a huge metal facility called Rudra Sampradaya, or the Temple of Storms, the largest known summoning circle, which was built on an intersection of ley lines in order to maintain a continuous flow of energy. So the Aeon was bound to the world, even after the colossal conflict of the Devahs came to an end.

Rudraskha is also considered one of the Sleepers, a group of creatures of power so enormous that their appearance in the world could be a catastrophe of unimaginable proportions, or even the end of human civilization. At the moment the Aeon still rests, deeply asleep within the Temple of Storms in Baho although its consciousness is able to feel vaguely what is around it.

Name: Rudraskha, the Storm Aeon. The Great Aeon, King of the Aeons.

Age: Unknown (Appeared the first time the man began to fear the storms)

Superhuman Physical Characteristics, Immortality (Types 1, 5 [Has surpassed death and will simply fall unconscious rather than dying] and 8 [If destroyed, the Nexus will spawn another Aeon related to the storms.], 9 for avatars), Abstract Existence (Type 2, it's the embodiment of the concept of storms), Non-Physical Interaction (Capable of harming energy, elemental and immaterial beings, souls/concepts, ghosts, and even nonexistent beings, such as the Etrien Gnosos. Can also interact with the Noth), Regeneration (High-Low, Any amputated limb recovers within a week if placed on the stump), Durability Negation (With Storm Claws), Pocket Reality Manipulation, Creation (Creates 4 Prisms upon entering Armageddon), Self-Sustenance (All Types), Large Size (Type 3, It's several miles in lenght), Weather Manipulation (It's the conceptual embodiment of storms and it's mere presence creates them), Flight, Air Manipulation, Electricity Manipulation, Transmutation (Can alter the properties of inanimated objects), Power Bestowal (Can make a pact that allows its power to be used as an Invocation and can make blood pacts to grant part of his supernatural abilities.), Power Nullification (Weapons cannot touch it, it ignores magic and psychic matrices melt before reaching it), Social Influencing (Possesses Persuasion 95), Enhanced Senses (Possesses Notice 80 and Search 30), Extrasensory Perception (Capable of feeling alterations to the Soul Flux, such as supernatural powers being released, and reading one's aura and appraising the state of their mind and see invisible things, such as spirits, magic, or psychic matrices), Limited Precognition (Can sense a storm 12 hours before it occurs), Information Analysis (Possesses Magic Appraisal 280. Can tell if a storm is natural or was made supernaturally.), Magic, Reality Warping, Soul Manipulation, Conceptual Manipulation (Type 2), Law Manipulation (Magic users manipulate the very essence of reality itself to impose their desired effects onto the world, Can manipulate and attack with souls by using Exodus Void Nova).

Soul Manipulation and Conceptual Manipulation (Type 2) (Possesses Gnosis 40, granting him notable control over the Soul Flux and the ability to ignore its influence), Invulnerability , Damage Reduction/Negation , and Immortality (Types 3, 5 and 8) Negation (Those with Gnosis can ignore the resistances, immortality, and damage reducing effects of those with lower Gnosis, as well as damage them through invulnerability, such as the Noth or a Nexus Guardian , and spiritual barriers. Can permanently kill Al-Djinn, Baal, who is reliant upon mankind, and those with Gnosis 40. He can also ignore Existential Barriers and immunities), Resistance Negation (Those with Gnosis 40 can ignore resistances to magic, psychic abilities, and elemental abilities), Limited Mind Manipulation (Holds influance over any air elemental of lower Gnosis than it), Avatar Creation. (As a Gnosis 40 being, it can create up to 4 avatars),Fate Manipulation and Causality Manipulation (Can influence the surroundings and make any outcome and event favorable to him)

Air Manipulation, Weight Reduction, Can give Self-Sustenance (Type 1) to others, Water Walking and Surface Climbing, Forcefield Creation (Can create an air barrier around itself), True Flight, Statistics Amplification (Via Reaction Increese and Speed), Electricity Manipulation, Intangibility (Elemental and Immaterial, which can also be applied to others), Teleportation, Weather Manipulation, Density Manipulation (Can solidify air), Creation (Via Create Sylph), Telekinesis, Can move magic sources and relocate spells.

Attack Potency: Low Multiverse level (As one of the strongest Aeons, shouldn't be much weaker than The Dragon, and can hold its own against Orochi. Likely comparable to the other sleepers), Higher with Exodus Void Nova

Speed: At least Supersonic (Via sheer size. Should be faster than most of flying creatures in Gaia), FTL Combat Speed (Those who have achieved Zen are capable of riding beams of light)

Lifting Strength: Class G (Has Strength 20, with Strenght 15 being enought to move mountains), Possibly Infinite (A creature with a Weight Index of 20 is capable of lifting absolutely any mass, as long as he is standing on something that won’t give way first.)

Range: Up to one hundred kilometers

Standard Tactics: Rudraskha has different battle patterns depending on the amount of damage it has suffered. As with any Aeon, the more damage its physical body takes, the closer it comes to the flow of souls and, consequently, the more its powers increase.

At the beginning of a fight, the Aeon mostly uses physical and magical attacks. If it finds itself fighting against hordes of enemies, it also has at its disposal its tail or the wing beats.

After losing 4,000 Life Points, Rudraskha is surrounded by storm clouds, leaving only small portions of its body visible as well as the gem on its forehead. During this stage, it only attacks with spells and lightning bolt attacks.

After losing 6,000 of its Life Points (i.e., when 4,500 remain), Rudraskha openly manifests again, and the battle resumes in the same way as during the first stage, although the storm clouds that surround it are now stronger than ever.

After losing 10,000 of its Life Points (i.e., when only 500 remain), Rudraskha’s essence is on the verge of destruction, but simultaneously its power reaches its peak. At that time, it wraps itself in a special dimension generated in its own soul, while preparing to unleash Exodus Void Nova. Although clearly visible, the Aeon is unreachable, and therefore immune to any attacks or supernatural abilities. After five turns of preparation, at the beginning of the sixth turn, the Aeon triggers Exodus Void Nova without leaving its dimension. Upon entering Armageddon, four crystalline shapes appear around Rudraskha that generate the dimension it is hidden in. If all of them are destroyed, it is no longer protected by its dimensional shield and reappears in the physical world, again vulnerable to attacks. The prisms have the same storm power as Rudraskha.

The explanation on how Gnosis works can be found here.