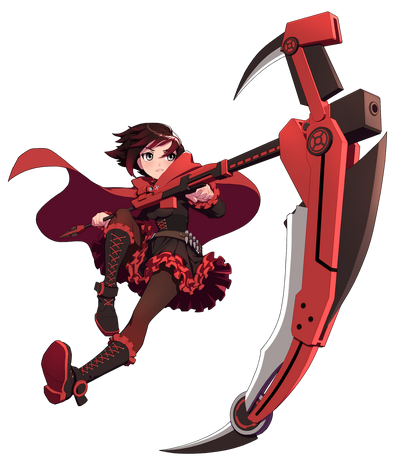 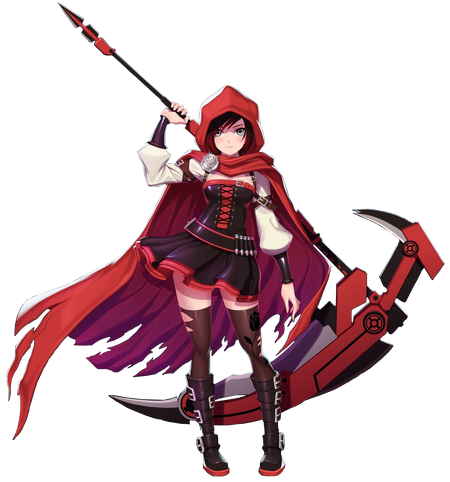 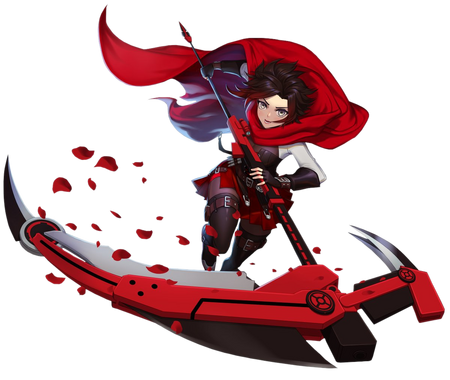 Ruby Rose is the 15-year old leader of Team RWBY attending Beacon Academy two years early, due to her abilities impressing the headmaster. Trained by her Uncle Qrow, Ruby wields a unique weapon named Crescent Rose, a cross between a scythe and a high-caliber sniper rifle that is able to fold up into itself. Her semblance is speed, enabling her to run at rates that are too fast for the eye to catch. As she is the youngest of the group, she can be a bit childish, naive, and weapon-obsessed, but displays leadership qualities and an understanding of people that ultimately led her to be chosen as Team RWBY's leader. She was inspired to become a Huntress by the fairy tales her half-sister Yang read her, wanting to become just like the heroes in the stories. She is determined to make the world a better place for others and try to stop the forces that conspire against it.

Powers and Abilities: Superhuman Physical Characteristics, Acrobatics, Expert Scythe wielder and marksman, Aura (Able to use her Aura for numerous purposes), Forcefield Creation (Aura can be used as a full-body forcefield), Statistics Amplification (Can use Aura to enhance her striking power), Enhanced Senses (Can use her Aura to sharpen her senses), Regeneration (Mid-Low), Super Speed (Via Semblance), Pseudo-Flight (Can propel herself using Crescent Rose), Elemental Manipulation (Can load various Dust-charged clips that enhance her shots with elemental properties - these include Fire, Ice, Electricity, and Gravity), Stunning, Flash-Freezing with Ice Dust, Holy Manipulation with Silver Eyes (Uses the same energy as the God of Light, which petrifies, paralyzes, or disintegrates the God of Darkness' creations, such as the Grimm), Resistance to Extreme Heat and Cold (Aura protects the user from sub-zero temperatures, allowing them to walk through a blizzard in casual clothing or be encased in ice without being cold, as well as extreme heat up to and including the heat of flames, being blasted with steam, and being submerged in lava without being burned) | All previous abilities plus Flight and Pseudo-Duplication (Via Semblance)

Speed: Hypersonic (Comparable to Yang Xiao Long, who can run this fast while crossing a bridge, and Weiss Schnee, who could travel this fast while fighting Flynt. Consistently reacts to bullets and consistently keeps up with other bullet timers like Mercury Black), higher with her Semblance (Dashed and blitzed Team JNPR, trapping them on a vortex with her speed) | Hypersonic+ (Equal to Blake Belladonna and comparable to Sun Wukong. Deflected Tyrian's shots and Emerald's bullets), higher with her Semblance

Durability: Building level+ (Can tank a kick from Mercury Black, whose fight against Yatsuhashi generated a shockwave with this much energy. Tanked a hit from Nora Valkyrie, who consistently has feats on this level), Large Building level with Aura (Allows her to take hits from characters stronger than her and acts as a 'health bar' that lets her take multiple hits from characters of similar stature) and Ice Dust (Her Ice dust was able to restrain Nadir and the Atlesian Paladin) | Large Building level (Took a direct hit from the Nuckelavee, which required the combined efforts of Team RNJR to defeat), higher with Aura (Her aura can take a few hits from a casual Tyrian before being depleted) | At least Large Building level, higher with her Aura

Stamina: High (Ruby can mutilate hordes of monsters by herself and shows no signs of fatigue in battle at all)

Intelligence: High, especially regarding combat and weapons (Ruby is extremely knowledgeable regarding weapons, having designed and built Crescent Rose from scratch during her time at Signal Academy, and being able to name every individual part of her weapon. She is capable of analyzing a weapon she's never seen before down to the function and the material it's made of just by looking at it once, even when suffering from severe stage fright. She also possesses superb combat prowess, having received training from her uncle Qrow. She is capable of taking on entire hordes of Grimm on her own and walking away without a scratch and utilizing the different functionalities of the Crescent Rose, such as the massive recoil from the rifle aspect of the weapon and the weapon's transformative capabilities, in tandem with each other and her Semblance in order to maintain an edge over her opponent. Ozpin himself has stated that it would take someone with skill comparable to that of Qrow in order to wield Crescent Rose to its fullest efficiency)

Weaknesses: Ruby is somewhat reckless, Continual damage to her Aura will cause it to decay to the point where she can be left open to more significant damage, Inept at hand-to-hand combat. Aura's durability is cumulative; it will deplete with each attack she takes and can be brought down by characters of similar strength. Semblances drain aura by a small amount and without aura they cannot be used until the user's aura is recharged. | Unable to use Silver Eyes willingly and to their fullest extent (She has only demonstrated the ability to utilize the Silver Eyes involuntarily in situations where people she cares about have been or are in danger of being killed, such as after witnessing Pyrrha being murdered in front of her or Cinder almost killing Jaune. The initial result of using the Silver Eyes left her unconscious for several days with no recollection of what happened prior, though this may have been due to the magnitude to which the ability was used, as when she saved Jaune the ability was far less powerful) 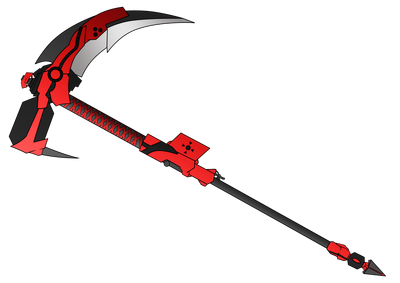 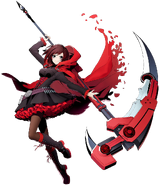 Ruby in the manga

Ruby in the Bilibili Mobile Game

Ruby in RWBY: Combat Ready
Add a photo to this gallery

Drizella Tremaine (Once Upon a Time) Drizella's profile (Note: 8-C versions of both were used, Speed was Equalized)

Eddy (Ed, Edd and Eddy) Eddy’s Profile (Vol 1-3 Ruby was used, Speed was Equalized and Eddy had a day of preparations)

Rapunzel (Once Upon a Time) Rapunzel's profile (Note: Vol 1-3 Ruby was used, Speed was Equalized)