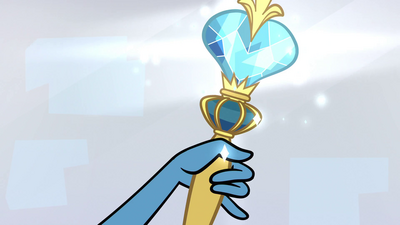 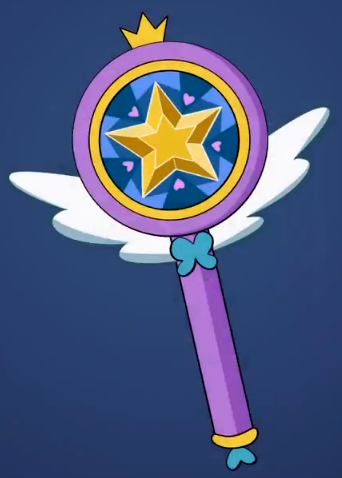 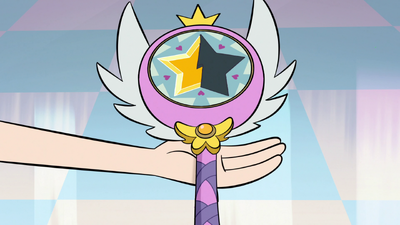 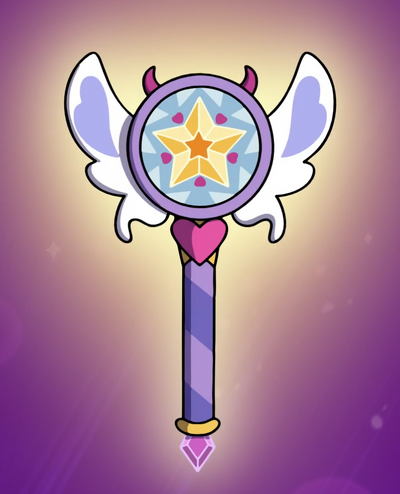 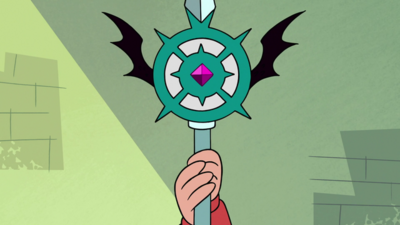 The Royal Magic Wand (otherwise known as Star's Magic Wand) is the kingdom of Mewni's family heirloom. It transforms to match the wielder's personality. It is the main weapon of Star Butterfly, which she also must protect, in the Disney Channel and Disney XD animated series, Star vs. the Forces of Evil.

The wand is known to be very powerful and a big responsibility, so powerful that if it fell into the wrong hands, the universe could be destroyed. The wand is able to bring whatever the user thinks of into reality. Star when using this wand can create different things like puppies, snakes, and miscellaneous creatures . It can also be used to create attacks. When Star uses the wand in a fight, it makes a "rainbow fist punch," a "jellybean hallucination mist," a mega narwhal blast, and a spider with a top hat (with a laser cannon in his hat).

Additionally, the wand can also cause destruction, such as creating flaming rainbows or puppies with laser eyes, as well suck things into oblivion.

The Wand happens to comes with an instruction manual inside contains magic spells that have been mastered and written down by the previous owners of the wand. Unfortunately, the book is a disorganized mess, which gives the current owner (star) trouble finding certain spells.

Attack Potency: Varies depending on the attack & user. At least Universe level+ at its height (Star used it to freeze time everywhere in the Universe; Queen Butterfly warned that the Wand could destroy the universe if it fell into the wrong hands, which is why Ludo sought it; the Magic Instruction Book has instructions in case the user accidentally destroys the universe), possibly higher (Froze time on such a large scale that Star needed Father Time's help in restoring it, slightly damaged the very concept of time itself. Should be superior to Moon Butterfly's wandless magic, which managed to clash against Toffee)

Weaknesses: Becomes weaker when it loses charge; if it completely runs out of charge, then it will stop working forever;

Retrieved from "https://vsbattles.fandom.com/wiki/Royal_Magic_Wand?oldid=6079519"
Community content is available under CC-BY-SA unless otherwise noted.