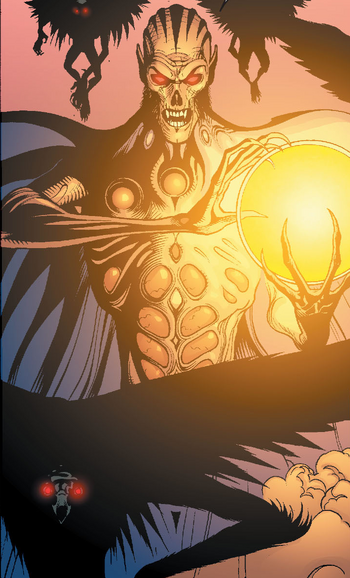 Rox Ogama was the Monitor of Earth-31, who embraced the true nature of the Monitors and fed on Creation in the same way the original Mandrakk had, becoming the new Mandrakk, albeit with less power. He was exiled by the other Monitors to the germ worlds, where he turned the Ultraman of the antimatter universe into his vampire thrall. From there he launched an attack on the dying Multiverse, already nearly destroyed by Darkseid, but was stopped by Nix Uotan, who had awakened to his status as Judge of All Evil.

All previous abilities to a much greater degree, plus: Abstract Existence (Type 1), Beyond-Dimensional Existence (Type 2), Large Size (Type 11), Non-Corporeal, Intangibility, Immortality (Type 10), Conceptual Manipulation (Type 1), Size Manipulation and Dimensional Travel (Can alter both his scale and pitch to enter lower dimensions and traverse the Multiverse), Plot Manipulation (Monitors "makes moments" in the story with their power)

Attack Potency: Universe level+ (Defeated both the Spectre (Crispus Allen) and the Radiant) | Outerverse level (The Monitors are each fractions of Mar Novu, existing as Primal Forms in a Fundamental World)

Durability: Universe level+ (Should be comparable to his own power) | Outerverse level (Equal to others of his kind, who withstood the explosions of the clash between the Thought Robot and Mandrakk)

Intelligence: Supergenius (Comparable to other Monitors)

Retrieved from "https://vsbattles.fandom.com/wiki/Rox_Ogama?oldid=5369414"
Community content is available under CC-BY-SA unless otherwise noted.