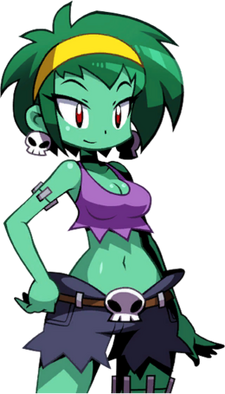 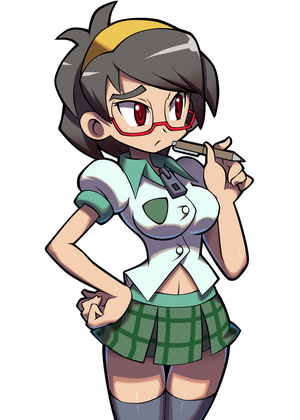 Rottytops is a carefree and energetic zombie that is part of the Zombie Clan. She lives with her two brothers, Abner and Poe. Rotty often wants to eat Shantae's brain, but has become good friends with her despite this. In the Village of Lost Souls, she reveals her true feelings about Shantae. She considers Shantae her best friend and truly cares for her. It is unknown how she became a zombie, with her human self not even remembering either. Despite this, she is willing to help her friends in need and has grown a stronger bond with Sky and Bolo while traveling through Shantae's memory in order to save her.

Powers and Abilities: Superhuman Physical Characteristics, Non-Physical Interaction, Magic, Healing, Immortality (Types 2 and 7), Possibly resistance to Pain, Disease Manipulation (Stated she can turn a hamster into a zombie by biting it), and Regeneration (High-Low; can reattach or replace her body parts, including her head)

Attack Potency: Small City level+ (Can harm Nega-Shantae and other bosses that are comparable)

Speed: Subsonic with Massively Hypersonic+ reaction speed (Can keep up with Shantae in a race. Dodged lighting from the Giga Mermaid)

Stamina: Likely limitless (Due to being a zombie. Should have the same stamina as a zombie hamster, which was stated it wouldn't get tired, unlike a normal hamster)

Head Throw: Rotty will throw her head usually past hazardous locations. Wherever it lands, skeleton hands from the ground will appear to take her body and reattach her head.

Leg Pull: Rotty's main way of attacking is by using her own leg to hit others.

Brain: Rotty will pull out a brain out of nowhere and eat it, regaining all her health.