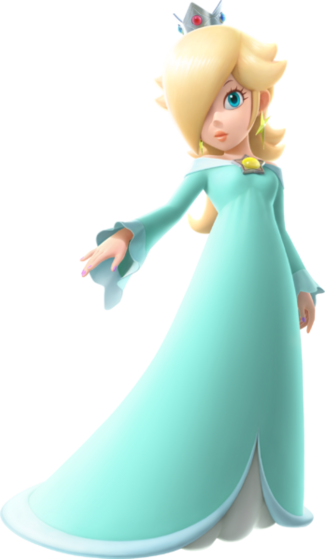 Rosalina is a princess originating from Super Mario Galaxy. She is a very powerful figure, as her duty is to watch over and protect the cosmos, while also serving as the adopted mother of the Lumas and the commander of the Comet Observatory. As a young girl, she meets a young Luma in a rusted spaceship, which they rebuilt in order to search for the Luma's mother. As they traverse through space, Rosalina kept monitoring her home planet where her mother lived as a result of missing her until her mother died one day. Being saddened and homesick from the event, the young Luma who traveled with Rosalina told her that her mother is always part of her and then transforms into a comet that can traverse to Rosalina's home planet. Rosalina then declares that she and all the Lumas who followed her are family now and goes back to her home planet once in every one hundred years.

Age: At least 110 (Her childhood was displayed in her storybook and it was explicitly stated that the Comet Observatory would pass by her home planet every 100 years. It isn't, however, certain as to how much time had passed since the time of her backstory), possibly billions of years old (Implied to have seen a number of universal resets)

Classification: Human-like being "made of star stuff", Princess, Mother of the Cosmos

Attack Potency: Multi-Solar System level (Seemingly shown to be comparable in strength to Mario and his friends in Super Mario 3-D World and capable of creating a realm that contains numerous stars) | Universe level+ (The Grand Stars are able to threaten the fabric of the universe)

Durability: Multi-Solar System level physically (Should be comparable to Mario), Universe level+ with forcefield (Could shield a blast that threatened the very fabric of the universe) | Universe level+

Standard Equipment: Wand | Same as before, the Grand Star

Intelligence: Genius (Has an intimate amount of knowledge of the universe and holds a doctorate)

Keys: Base | With the Grand Star

Feats: Shown to manipulate reality to create a space that contains numerous stars.

Doctor
Add a photo to this gallery