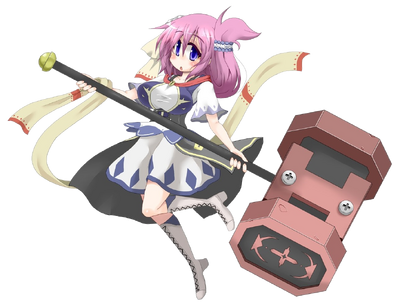 Rosalice is a playable character for Wonderful World. She is the 3rd Highest Ranking Knight in the Order of Lekseim; an order known for being very religious not just as an Order of Knights but as a whole city. As a Knight of her caliber, she went through a ritual known as the "Blessing of Sunlight". After going through it, Rosalice discovered she was capable of converting physical pain inflicted on her to pleasure; effectively making her a literal combat masochist. With this, Rosalice can not only instill her magic into another's & Destroy them from the inside, but even Restore an ally's power, boost their abilities, & even strengening their healing (Thus, it could be possible for Rosalice to do the same to her.). She seems to have eyes for Rescana Almadia; the Headmaster of the Order of Lekseim...

Powers and Abilities: Superhuman Physical Characteristics, Mallet Mastery, can convert pain to pleasure (The Blessing of Sunlight converts all physical trauma to a more enjoyable phenomenon. From there, just being hit only increases her power), Magic Engravement (Rosalice's Göttin Faust can engrave her magic into another & destroy them from the inside out.), Holy Magic (Similar to Corona & her Light Magic, Rosalice can use this as she swings her giant mallet.), Light Magic (She can summon pillars of light, Light Beams from Orbs that seem to resemble lasers, among other things.), Weapon Transformation (She can transform her Göttin Faust into a Spear like Weapon resembling a decorative Cross of light via Lichtstrafe (Light Punishment, translating from German).), Time Stop via Lichtstrafe (As Rosalice uses this move, Time Stops as she transforms Göttin Faust into a Spear of Holy Light. Might also count as Precision Mastery...).

Speed: Likely Massively Hypersonic (Can go toe to toe with Chartette according to this calc.)

Lifting Strength: Unknown. At least Athletic Human (Can lift the currently unplayable Heathrod at 125kg, but it's possible he can do better)

Durability: At least Small Town level (According to this calc, Chartette's swing alone should be capable of this.), likely higher

Standard Equipment: Göttin Faust: This Weapon was awarded to Rosalice by the Goddess. It has immense physical power, & can be transformed into a spear of light with her magic. The Weapon Name is translated from German roughly as "Fist of Goddess"

Intelligence: As the 3rd Highest Ranking Knight of Lekseim, she has been in many a battle. She his high experience with her own magic, & is even a team player.. Calm & Collected in battle.

Weaknesses: Shouldn't entirely rely on her Blessing of Sunlight (She still takes damage even as her meter increases for each hit.), may be immodest towards Rescana, the Headmaster of the Order of Leksheim, & Rank #1.