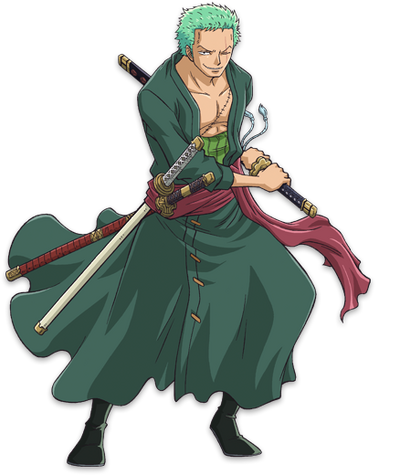 Roronoa Zoro, also known by his epithet “Pirate Hunter”, is the premier swordsman of the Straw Hat Pirates and a member of the Monster Trio. Recruited as a mildly notorious bounty hunter (hence his “Pirate Hunter” moniker), he is a monstrously powerful man who don’t wield the power of a Devil Fruit, using a unique Santoryu Sword Style in battle of his own creation, wielding a sword in each hand along with one in the mouth. Zoro mostly drinks and sleeps in his spare time (when he is not busy training to get stronger), but can becomes such a real demon in battle that many people often wondered why someone of his strength isn't the captain. Whenever he engages in a serious fight, he tends to tie a bandana around his head. Also, he has a horrible sense of direction.

Similar to Luffy’s goal, Zoro wishes to become the greatest swordsman in the world as a promise to his childhood rival Kuina, whom he wanted to win against but never could because she died in an accident. Unlike Luffy, however, he needs only to defeat Dracule “Hawk Eyes” Mihawk, the current greatest swordsman in the world, to do so. He actually meets up with Mihawk fairly early in the story, but failed to land even a single hit and was effortlessly defeated by Mihawk for his trouble. However, the man held back just enough to leave Zoro alive, and told him to challenge him again when he was ready.

In a strange twist of events, after the Sabaody Island Incident, he is trained by Mihawk, the adversary he swore he'd defeat someday, for two years to become a stronger swordsman to protect his crew. For giving up his pride for the sake of others impresses Mihawk enough to agree. From his training with him, he finally learned how to turn his swords into Black Blades too (Busoshoku Haki, his specialty) as well learn Kenbunshoku Haki.

Mainly because of his strength and for going alongside Luffy's battles, Zoro is counted as a member of "The Worst Generation" like his captain.

After the time skip and events of Dressrosa, his third and current bounty is 320,000,000 berries.

Powers and Abilities: Superhuman Physical Characteristics, Superb Swordsmanship, Exceptional Willpower, Advanced Armament and Rudimentary Observation Haki user, Martial Arts, Accelerated Development (Battle and training; physical stats), Air Manipulation (He can throw his slash for a ranged attack or even produce a cutting whirlwind), Extrasensory Perception (Can sense curses within swords), Acrobatics, Minor Adaptation (Adapted to the oxygen shortage), Illusion Creation and Aura (Via Asura), Body Control (Can increase the muscles in his arms at will), Statistics Amplification (Via increasing the muscle mass of his arms to briefly enhance his strength and Asura, which triples his attacking power), Minor Analytical Prediction, Minor Fire Manipulation (Via Flying Dragon: Blaze), Resistance to Curse Manipulation (He was able to overcome a cursed sword only by using his own luck, the same cursed sword that bring bad things and mysterious deaths to the people who carry it), Fire Manipulation and Heat Manipulation (Unaffected by the flames engulfing him), as well as Cold Temperatures, Pain Manipulation (Has an extremely high pain tolerance, able to withstand extensive beatings, impalements, as well as took on all of the pain and fatigue Luffy endured during the entirety of Thriller Bark despite being severely injured himself... and remains conscious and standing), Minor Resistance to Sleep Manipulation and Poison Manipulation (Was unaffected by the poison and razor blades Sanji put in Zoro's lunch and digested it without any issue. In Wano he ate polluted fish from Wano's rivers and only got a stomachache) | Same as before, Enhanced Smell (Figured out the magistrate was the killer he was being framed for when he smelled blood on him), Resistance to Energy Absorption (Took his strength and Haki back after the legendary sword Enma drained it from his arm;  changed a coastline with a single swing after a single use.)

Stamina: Immense, was able to withstand Kuma's Ursus Shock and get up only moments after, in conjunction with this and other beatings he took in the length of the battle against Oz, he also shouldered the strain and fatigue the the shadows and Gears had put on Luffy's body (who had fallen asleep by then, as is his custom once he defeats the main villain of the arc) and still managed to remain standing afterwards and survive long enough for Chopper to see to his wounds.

Intelligence: Combat genius. Developed the sword styles he utilizes (including Santoryu, which is a style unique to him) by himself and grows at a very fast rate, at times even improves notably in the middle of battle. Perceptive and adept fighter (quick to grasp the rhythm of battle and applying himself accordingly to gain benefit by the developments) and a man of canny tactical ability (has on more than one occasion pulled through with a victory with smart thinking), able to predict the opponent's movements even in situations when he has enough time to give one hit. Much like his captain, he's as thick as a plank outside of battle.

Weaknesses: Zoro has a very poor sense of direction (i.e. climbing up buildings when told to go north and getting lost in a straight hallway).

Santōryū (三刀流, literally meaning Three Sword/Blade Style, Dub; Three Swords Style) is a style of sword fighting where the practitioner wields three Katana; one in each hand and one in the mouth. There are many different techniques for this sword style, including high speed attacks, direct hit attacks and compressed air projectile attacks. Roronoa Zoro is the world-famous swordsman of the Straw Hat Pirates who created this style. Zoro can use three swords, two swords, and one sword style techniques. When he uses three swords, the third one (usually the Wado Ichimonji) is placed in his mouth. While using Santoryu, Zoro has a tendency to hold his left hand blade with a "reverse grip", in which the blade protrudes from the bottom of his hand and points away from the opponent. This is likely done to increase the versatility of his attacks, as holding the blade in this fashion allows him to deliver multiple cuts from a variety of angles. A few examples are during his battle with Pica, when he blocked Pica's strike on the Fighting Bull, when he uses "Ichidai Sanzen Daisen Sekai", and when he uses "Sanzen Sekai". Several of his attack names are actually puns due to the way some of the Japanese words are combined together. When these words are pronounced together, they can sound like a completely different Japanese word, often referring to cuisine in general, and to sushi in many specific cases. Also, while Zoro is agnostic, some of his attacks have religious references to them. Many of his attacks before and after the timeskip also incorporate animal themes (gorilla, dragon, lion, bull, etc.). 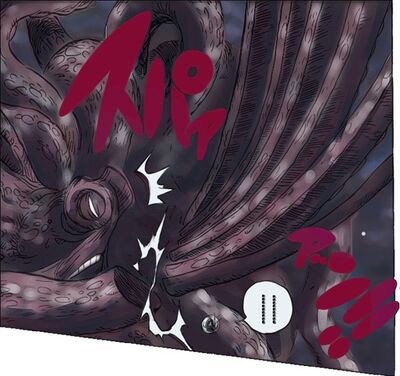 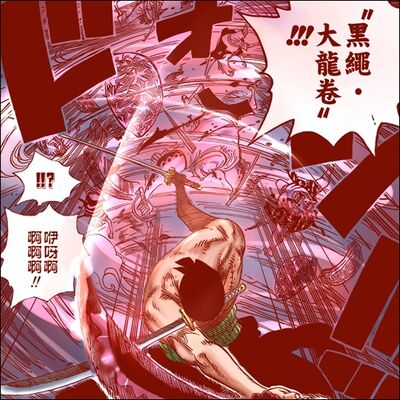 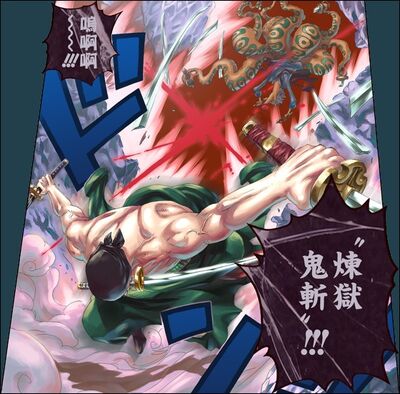 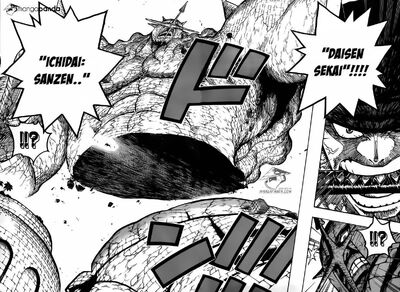 Ittōryū (一刀流, literally meaning One Sword/Blade Style): Over the course of his journey, Roronoa Zoro has been in situations where his techniques have had to adapt for one reason or another. In addition to his primary fighting style, he has several other related fighting styles that form the greater part of his Santoryu fighting abilities. Ittoryu is one of them. These are the attacks he uses with one sword. As Zoro is left-handed, his Ittoryu techniques have nearly always been executed with his left hand. He usually uses Wado Ichimonji for them, but after the timeskip he seems to be proficient in using each of his three swords for his one-sword techniques. He mainly fights with one sword when not fighting seriously or when he is using a specialized cutting technique. Early in the series (when Sham stole two of his swords and Zoro had to fight him and Buchi with just one), Zoro himself claims that he is "not that good at one-sword techniques". However, over time, he seems to have worked on this weakness and becomes proficient with this style. In fact, most of his Ittoryu techniques are very powerful finishing techniques. 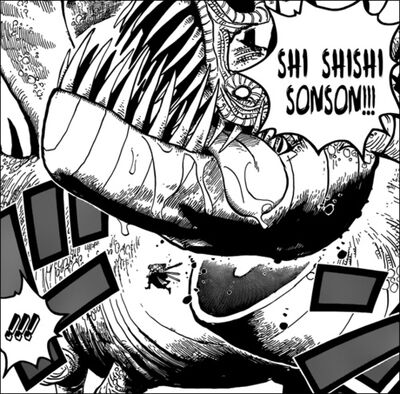 Nitōryū (二刀流, literally meaning Two Sword/Blade Style): Nitoryu is another related sword/blade-style that Roronoa Zoro developed over the course of his journey, when in situations where his techniques have had to adapt for one reason or another. These are the attacks he uses with two swords. Nitoryu was also Zoro's original fighting style when he began to learn how to wield a sword, before accepting Kuina's sword and practicing Santoryu.

Notes: Named "Zolo" in the 4kids dub. He is not to be confused with the fictional Californian vigilante and swordsman Zorro.

Machamp (Pokémon) Machamp's profile (Wano Zoro and Machamp were used, speed was equalized and they started at 30m from each other)