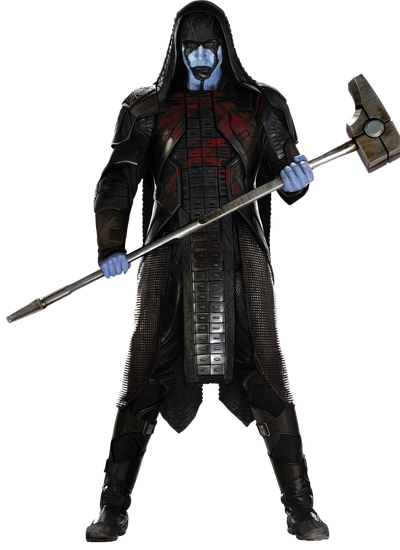 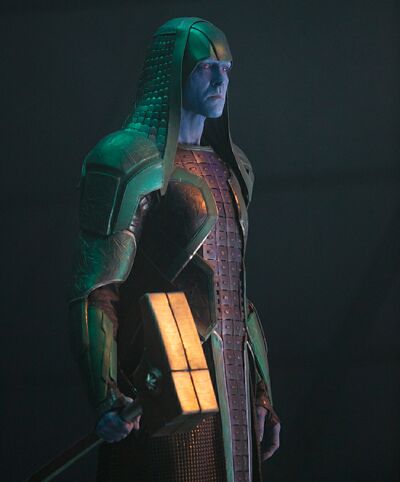 Ronan was a radical member of the Kree Empire, and former member of the Accusers. In 1995, during the Kree-Skrull War, Ronan worked with Yon-Rogg and the Starforce after the Ambush on Torfa to wipe out the last of the Skrull refugees. Ronan and the Accusers were then called to drop warheads on Earth to wipe out the remaining Skrull opposition there, but was forced to retreat when Captain Marvel launched a counter-offensive against the Kree, promising retribution. Further disgusted by a peace treaty made between the Kree Empire and Xandar, Ronan initiated a new campaign to eradicate the Xandarians by forging an alliance with Thanos, offering the Orb in exchange for the destruction of Xandar. After a long search, Ronan acquired the Orb, but after having seen its true destructive capabilities, betrayed Thanos and chose to take the Orb's power for himself. Using his new-found power, he attacked Xandar, only to be defeated and killed by the Guardians of the Galaxy.

Tier: At least 8-A, likely higher. Low 6-B with Kree Ballistic Missiles | Varies depending on size, up to 5-A against celestial bodies

Powers and Abilities: Superhuman Physical Characteristics, expert at close combat and with melee weapons, has a healing factor and his hammer can shoot concussive blasts | Same as above but with greatly enhanced destructive power via the Orb.

Attack Potency: At least Multi-City Block level, likely higher (One of the strongest of the Krees, and was even worshipped by fellow Kree. Should be superior to Kree Reapers. Stomped Drax with ease, stomped all The Guardians of The Galaxy at the same time without using the Orb at his full power. His Cosmi-Rod one-shot The Other, who was capable of threatening Loki). Small Country level with Kree Ballistic Missiles (Should be comparable to the more powerful missiles of Sanctuary II, which can cause explosions big enough to be seen from space. Can cause explosions of this scale on Torfa. Has ravaged entire planets) | Varies depending on size, up to Large Planet level against celestial bodies (The Orb destroyed all the life of a planet and devastated its surface in a flashback)

Durability: At least Multi-City Block level, likely higher (Took hits from Drax with ease. Survived the destruction of the Dark Aster (3 miles long) which Groot barely survived with shields), likely far higher with armour (Tanked a blast by the Hadron Enforcer which could blow up moons according to Rocket. However, it was easily destroyed by the Power Stone)

Weaknesses: None notable | His base durability is far weaker than his weapon

Standard Equipment: His hammer called Cosmi-Rod and the Orb, The Dark Aster, Kree Ballistic Missiles (with his Knee ship)

Key: Base | With the Orb

Note: Do not scale Ronan to Loki as it was deemed unreliable and inconsistent.