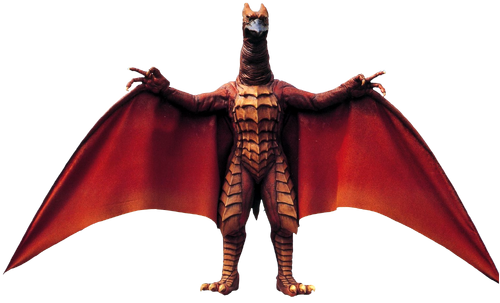 Rodan (ラドン) is a giant Pteranodon kaiju who appeared in the 2004 Godzilla film, Godzilla: Final Wars.

A mind-controlled pawn of the Xiliens, Rodan appeared in the skies over New York, destroying the plane carrying United Nations Secretary General Naotaro Daigo and allowing him to be captured by the Xiliens. Rodan devastated New York before being recalled by the Xiliens as they posed as mankind's savior. When their true colors were exposed, the Xiliens unleashed Rodan and their other mind controlled kaiju across the globe. Rodan resumed his destruction of New York, and was then deployed to Mount Fuji alongside Anguirus and King Caesar to battle Godzilla. The combined might of all three monsters was not enough to bring down Godzilla, who knocked them all unconscious and stacked them in a pile before continuing on his way.

Range: Tens of meters by virtue of sheer size

Retrieved from "https://vsbattles.fandom.com/wiki/Rodan_(Millennium)?oldid=6021988"
Community content is available under CC-BY-SA unless otherwise noted.