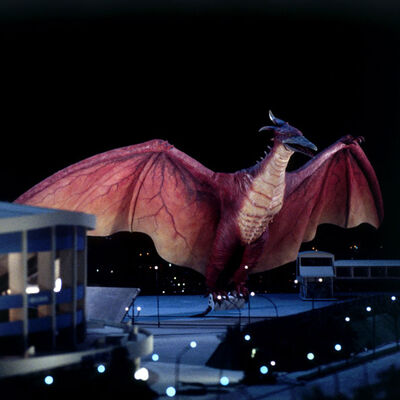 Rodan (ラドン) is a giant Pteranodon kaiju that appeared in the 1993 Godzilla film, Godzilla vs. Mechagodzilla II.

A Pteranodon mutated by nuclear waste, Rodan was living in his nest on Adonoa Island, watching over the egg of BabyGodzilla. When a team of scientists arrived on the island and tried to take the egg, Rodan attacked their camp, only for Godzilla to arrive and attempt to claim the egg as his own. Godzilla seemingly killed Rodan in the battle, allowing the scientists to escape with the egg. However, Rodan was soon revived as Fire Rodan (ファイヤーラドン) and traveled to Japan to recover BabyGodzilla. Rodan was attacked by Mechagodzilla and seriously wounded, then sacrificed his life to revive Godzilla and allow him to destroy Mechagodzilla and raise BabyGodzilla in his place.

Attack Potency: Planet level (Fought Heisei Godzilla. After his defeat he absorbed Godzilla's nuclear energy, allowing him to become the much stronger Fire Rodan, which was able to grant Godzilla enough power to defeat Super Mechagodzilla upon his death)

Speed: Supersonic+ Flight Speed (Stated as being able to fly at supersonic speeds, can flight at Mach 3), FTL Reactions and Combat Speed (Kept up with Godzilla)

Range: Tens of meters by virtue of sheer size, Hundreds of meters with ranged attacks

Retrieved from "https://vsbattles.fandom.com/wiki/Rodan_(Heisei)?oldid=6168560"
Community content is available under CC-BY-SA unless otherwise noted.