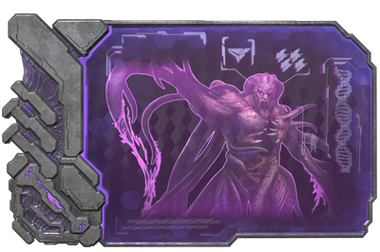 Rockwell is a boss monster from the game Ark: Survival Evolved. He was one of the few explorers who had written Explorer Notes containing recipes before he went insane "ascending" with his Element experiment which mutated him immensely, turning him into a humanoid monstrosity with exposed organs, a malformed body, and many tentacles.

Attack Potency: Multi-City Block level (Comparable to other Boss Monsters, his attacks are this strong)

Speed: Unknown travel speed (Seemingly can not move from where he emerges), Supersonic attack speed with tentacles (Due to his size, his tentacles surpass the speed of sound)

Lifting Strength: At least Class M (Much stronger than smaller creatures to an unknown extent, size should ensure this, comparable to other boss monsters)

Durability: Multi-City Block level (Size should ensure this, Comparable to other Boss Monsters)

Range: Tens of metres with tentacles (Size should ensure this), Higher with projectiles

Intelligence: Extraordinary Genius (Comparable to The Survivor as he made the same journey through the arks, has since gone insane though but it is unknown if this affected his intelligence)

Weaknesses: If tentacles take sufficient damage his heart is exposed, leaving him vulnerable. seemingly cannot move from where he emerges

Retrieved from "https://vsbattles.fandom.com/wiki/Rockwell?oldid=5685314"
Community content is available under CC-BY-SA unless otherwise noted.