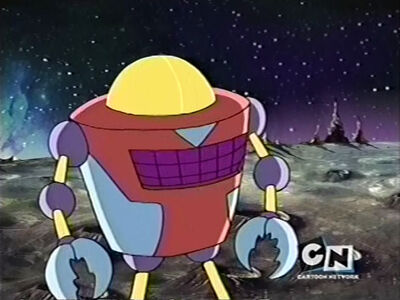 Robot Randy was a character who appeared in the episode of the same name in Courage The Cowardly Dog. He is a Robot from Earth's satellite moon and was looked down upon by his peers due to his hatred of destruction.

Gender: Genderless but regarded as male

Attack Potency: At least City level (Burnt Eustace Bagge to a crisp) to Mountain level (A Robot who Randy claimed to be stronger than completely destroyed a mountain and left a large crater), likely higher (Claimed to be the strongest Robot in the universe and easily killed another Robot who should be comparable to the one who destroyed the mountain)

Speed: Relativistic (Should be comparable to Courage)

Range: Several Meters (Robots can fire their lasers to mountains that seemed to be meters away)

Intelligence: Seems to be reasonably high.

Weaknesses: Has low self-esteem, though this was mostly resolved by the end of the episode.