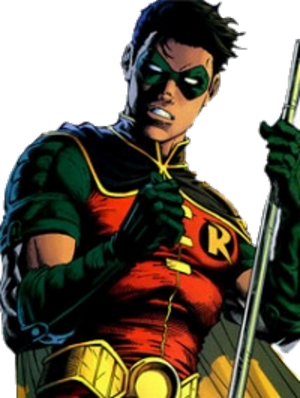 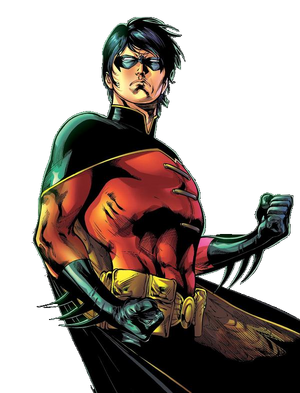 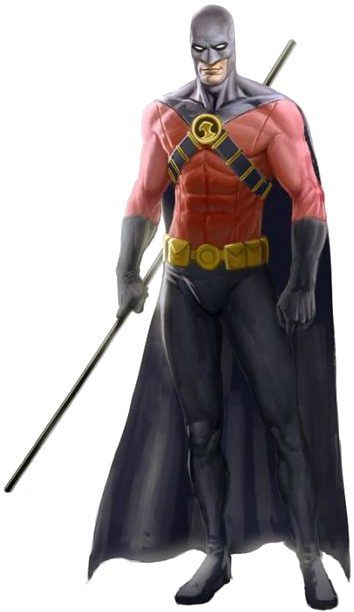 Tim Drake (also known as Tim Wayne) is a fictional comic book superhero from the DC Comics universe. As the third Robin in the Batman comics, he served as Batman's sidekick, and he is a superhero in his own right. He currently uses the superhero identity of Red Robin.

Age: Unknown, likely in his Late Teens or Early 20's

Speed: Massively Hypersonic (Should not be overwhelmingly slower than Katana, and is fast enough to dodge a spray of bullets in a confined sewer)

Durability: Small Building level+ (Tanked punches from Algorithm, who crushed steel with her bare hands and survived a telekinetic blast that shattered concrete)

Intelligence: Tim is arguably the most intelligent of Batman's proteges, being described as the best detective out of the Robins and is an adept hacker and computer scientist. Furthermore, Tim apparently has a firm grasp of assorted scientific techniques including biology, engineering, and genetics, which he has been shown to use in his attempts at re-cloning Superboy. Batman states that Tim could potentially become more intelligent and capable than himself, as proven when he single-handedly foiled Ras' al Ghul's plans, with the latter begrudgingly referring to him as Detective, an accolade previously reserved for Batman. Like the rest of the Bat-Family, Tim is an expert in hand-to-hand combat and can take on all but the best fighters in close combat. He is primarily depicted to wield a staff in combat, analyzing and exploiting his foes' weaknesses to trip them up before going for the takedown

Retrieved from "https://vsbattles.fandom.com/wiki/Robin_(Tim_Drake)?oldid=5928586"
Community content is available under CC-BY-SA unless otherwise noted.