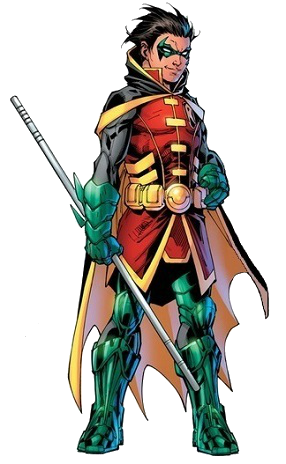 Damian Wayne is the biological son of Bruce Wayne (Batman) and Talia al Ghul. His existence was hidden from his father up to when he was about ten years old, during which time he was trained by the League of Assassins in a variety of disciplines to make him an extremely efficient killer. Damian was then sent to his father to disrupt his work as a vigilante (a task he completed with ease thanks to his blood relations and lack of social skills), but later grew to prefer his role as the son of Bruce Wayne and his time as Robin over his position as the al Ghul heir.

He was then disowned and a bounty placed on his head, leading him to be the target of a constant manhunt which culminated with his death at the hands of The Heretic, his rapidly aged clone. Distraught and driven nearly to the point of insanity by the loss of another son, Batman became increasingly cold and violent, and later took drastic measures to revive his son, raiding Apokolips to retrieve his son's body and the energy source needed to resuscitate him. Given a new lease on life, Damian now tries his best to live up his father's and foster brothers' legacy, but it doesn't stop him from trying to prove himself the best Robin and doing things in his own way.

Age: 10 in his original appearance, 13 Post-Rebirth

Speed: Massively Hypersonic (Should not be vastly slower than Katana)

Lifting Strength: Athletic Human (Can easily toss grown men and can carry Nightwing or Batman while they're injured)

Durability: Likely Small Building level+(Easily shrugged off being thrown hard enough to crack a wall, Easily blocked several kicks which break through the wall shortly afterward,Survived being beaten by numerous Dollatrons along with a point-blank explosionand was merely knocked unconscious)

Stamina: High, can fight hordes of henchmen for hours and considers taking on a squad of elite ninja trained by his grandfather to be a "disappointment". Like his father, he possesses an iron will, refusing to back down even after being shot, having several bones broken, having his back snapped, only succumbing after he was impaled through the heart.

Standard Equipment: Body Armor, Batarangs, Smoke Bombs, Stun Grenades, Gas Bombs, Grappling Hooks, Wireless Trackers, First-Aid Kits, Collapsible Metal Staff, a Katana (though this has become less prevalent in more recent versions of the character), his pet gargoyle, Goliath, which he can call with a whistle, A universal translator he pilfered from the Justice League that even allows him to actively converse with others from entirely different realities.

Intelligence: Trained from infancy by his mother, Talia al Ghul, Damian is an expert hand-to-hand combatant able to keep up with all but the best martial artists in close combat and can wipe out scores of henchmen and even elite ninja with ease. He also regularly spars with Nightwing and Batman. He has also used staves, swords, spears, knives, and other armaments, even managing to hold off Deathstroke long enough to send money to the latter's account. Also, having been raised by the League of Assassins, he is adept in stealth maneuvers, detective work, vehicle operation, and other skills. He is also empathetic towards animals, owning several pets, including a cowardly but physically strong and flight-capable gargoyle named Goliath. However, having been spoiled and raised with limited social interaction, he is often arrogant to the point of being reckless, with his lack of a father figure in his earlier years making him desperate to seek acknowledgment and recognition from him. Thus he sometimes makes poor decisions when he gains the upper hand.

Weaknesses: Normal human weaknesses, Reluctant to kill due to his father's teachings, impulsive, reckless, and overconfident at times, poor social skills make him a poor team player outside of his own family.