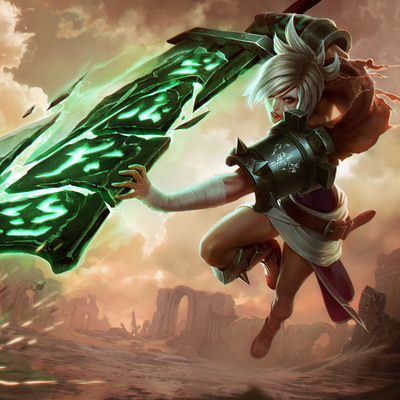 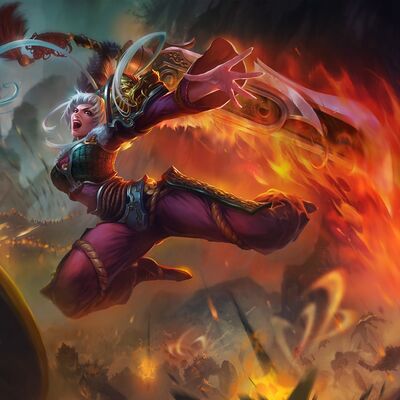 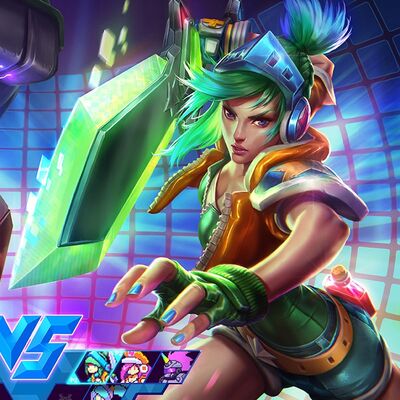 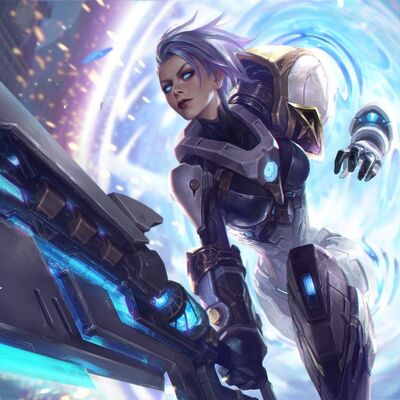 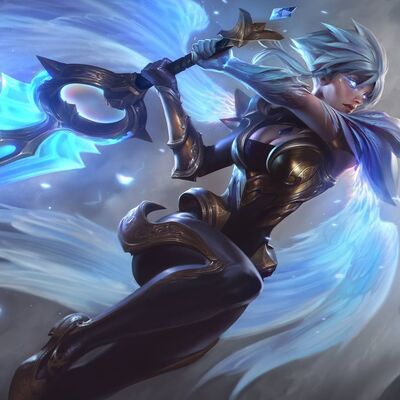 Once a swordmaster in the warhosts of Noxus, Riven is an expatriate in a land she previously tried to conquer. She rose through the ranks on the strength of her conviction and her brutal efficiency, and was rewarded with a legendary runic blade—however, on the Ionian front, Riven’s faith in her homeland was tested and ultimately broken. Having severed all ties to the empire, she now wanders with her shattered sword, seeking to atone for a past she cannot fully recall.

One tale of the kingdoms tells of Riven, her sword forged in dragonfire, descending into an enemy enclave in the aftermath of battle. Slaying her foes and freeing their captives, she rampaged across the countryside, crushing any who would enslave the innocent.

Riven's part-time job at an arcade mostly involved playing dance simulators after her manager went home. Digitally transported to Arcade World by even scarier bosses, she's now using her moves (and some gear from her favorite RPG) to tear up Veigar's regime, one enemy at a time.

Born from swirling energies at the dawn of creation, Riven is the living embodiment of order in the cosmos. Fated to clash against the Nightbringer for all time, she awaits a day when her light will finally break his darkness.

All powers as her base plus Fire Manipulation

All powers as her base plus Time Travel, Portal Creation, Existence Erasure, and Dimensional Travel (Can travel to other universes)

All powers as her base plus Immortality (Types 1, 3, and 8 [Reliant on the Concept of Order]), Regeneration (Mid-Godly), Abstract Existence (Type 1), Reality Warping (Her battle with Nightbringer Yasuo created and warped all of a reality), Light Manipulation, Flight, Transformation, Matter Manipulation (Can break down physical objects into light, turn intangible things such as light tangible, and can instantly restore broken objects such as her sword), Teleportation, Conceptual Manipulation (Type 2), Creation (Created everything in the universe as a byproduct of her fight with Yasuo, Can create an army of light soldiers to fight alongside her)

Lifting Strength: At least Class 1 (Can casually swing around a sword that is larger and heavier than a kite shield with one hand. Said blade is so large and heavy that it required two warrior priests to be able to carry it and would break the wrist of a well-trained temple priest if they attempted to lift it, let alone wield it.) | Unknown

Durability: Small Town level+, Town level with her Sword (Her sword is much more durable than herself, and Riven herself was unable to break the weapon, relying on Yasuo's elder to do so), higher with shields (Her shields should be comparable in strength to the magic used in Wind Slash) | At least Town level, possibly Mountain level | Small Country level | Small Town level+ | Universe level+

Intelligence: Gifted (Riven is a highly skilled swordswoman, having trained since childhood in swordsmanship and having the natural skill to quickly learn how to wield a blade larger than herself with deadly efficiency. Her skill is such that the Noxian High Command even recognized her as one of their most skilled soldiers, granting her a runic sword enchanted by the Pale Sorceress to wield in combat. Even years after her self-exile after the end of the Noxian occupation of Ionia she retained her skill, allowing her to keep up with a swordsman as skilled as Yasuo blow for blow in single combat.) | Presumably extremely high (Has existed since before the creation of the universe)

Riven of a Thousand Voices (Destiny) Riven's profile (Speed was equalized, Destiny Riven was 4-B and LoL Riven was Low 2-C)