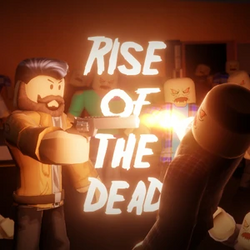 Rise of the Dead is an MMORPG zombie apocalypse game on Roblox. The game takes place during a zombie apocalypse, during which it is noted that all the zombies are mysteriously bald, which was thought to be related to the cause. That may just be a theory, but what is known is that a company known as BioX had been experimenting with various creatures, such as spiders, as well as humans. Their research was likely in the genetic engineering department, given the resulting circumstances. Eventually the test subjects got loose, breaking free of BioX’s control, and roaming the world again as zombies.

The whole verse sits solidly at Wall level for attack potency and durability, which is mostly thanks to a particularly bulky and mutated dinosaur known as Zricera, who can fling people a few tens of meters away with its attacks, and Vexeron, a large sandworm that can burrow through rock and launch itself into the air from the ground even while underwater. Players are able to match or even surpass Zricera and Vexeron in attack potency, and can survive being flung, jumped on, or simply rammed by both of them.

As for abilities, this verse is very versatile for being a zombie apocalypse, with varying Elemental Manipulation, Status Effect Inducement, Statistics Amplification and Reduction, and Natural Weaponry being the most common.

Other (not human or zombie)

Retrieved from "https://vsbattles.fandom.com/wiki/Rise_of_the_Dead?oldid=7137858"
Community content is available under CC-BY-SA unless otherwise noted.