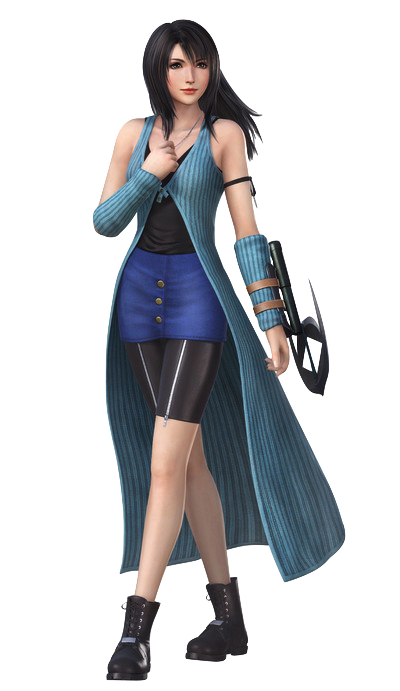 Rinoa Heartilly is one of the main characters of Final Fantasy VIII and the love interest of Squall Leonhart. She first contracted the SeeDs as mercenaries for freeing the town of Timber from Galbadian forces, but later learned with them the true reason behind the Sorceress War and their existence. Despite not being trained as a fighter, she can perform attacks with her dog, Julia. Later on, Rinoa could even use GFs and sorceress magic to complement her skills.

Superhuman Physical Characteristics, Non-Physical Interaction, Master Blaster Edge user, Flight (In her Angel Wing form), Magic, Explosion Manipulation (Via Angelo Cannon), Summoning, Regeneration (Low-Mid), Energy Blasts, Elemental Manipulation (Of the Fire, Ice, Lightning, Water Manipulation, Holy Manipulation, Water, Wind and Earth variety), limited Dimensional Travel/Pocket Reality Manipulation (Various summons can create/draw enemies into a pocket reality to attack them and transport them back again), limited Sealing (Can draw out and Seal enemy summons, using its power for herself), limited Damage Transferal (While summoning all damage taken is transferred to the GF), Poison Manipulation, Status Effect Inducement, Barrier Creation/Damage Reduction (Via Protect/Shell), Life Stealing (Via Drain and Junctioning it to her attacks), Sense Manipulation (Darkness reduces the targets vision drastically), Levitation, Telekinesis (Able to call down meteors), Petrification, Time Manipulation (In the variety of speeding herself up and slowing down her enemy) Time Stop (Via Stop), Gravity Manipulation, Transmutation (Via Zombie/Card ability), Invulnerability (Via Junctioning Rinoa can gain 100% resistance to elemental damage and statistic effects and even further to the point of where some of these abilities would heal her/Defend ability/Invincible Moon Limit Break), Biological Absorption (Via Devour ability), Power Absorption (Via Draw), Power Nullification (Via Silence/Lvl Down/Curses/Dispel), Healing, Durability Negation (Via Junctioning Death to her physical strikes, she can give her blows a chance to instantly kill the target. Meltdown/Demi), Information Analysis (Via Scan), Attack Reflection (via Reflect), Statistics Amplification (Can Junction Guardian Forces to increase her stats and Darkside), Statistics Reduction (Meltdown reduces opponents Physical/Magic defence stat to 0), Minor Mind Manipulation/Empathic Manipulation (Via Confuse/Berserk), Spatial Manipulation (Via Sorceress powers and Eden), Resurrection (Via Phoenix/Angelo Reverse), Absolute Zero (Via Shiva), BFR (Via Leviathan), | Same as before | All previous and Acausality (Type 2), Self-Sustenance (Type 2), Extrasensory Perception, and Dimensional Travel

All previous abilities enhanced, Immortality (Type 8,reliant on his Crystal which let him return from fading from existence after Cosmos' death) & Regeneration (Low-Godly), Summoning (Can summon various Eidolons from Summonstones and the World of Illusions), Willpower Manipulation (a person's will is power there and enables them to do a multitude of things the stronger their will[1]), Reactive Power Level (the greater someone's will, the greater their power[1]), Law Manipulation (Beings with strong wills can overwrite the laws of the world and bend them to their will[1]), Creation (With a powerful enough will, once can create various things such as phone lines, airships and even entire countries and worlds[1]), Sealing (Can seal off large areas and people with her will, such as Cecil sealing himself in Castle Baron or the cast sealing Kefka inside a Torsion[1]), Dimensional Travel (Characters can open Torsions, rifts in space-time to travel various dimensions[1]), and Immortality (Type 2) (Due to the crystal core of darkness's influence in the hands of Ardyn, warriors will not die no matter how injured they are)

Resistance to Mind Manipulation, Soul Manipulation (Via Zalera, the Death Serpah, who was going to absorb the souls of every living being on the planet), Corruption & Body Puppetry (Due to their light, Warriors of Materia can dispel attempts to control them), Empathic Manipulation, and Madness Manipulation (Type 3; Resistant to the effects of the True Moon, which is capable of affecting the hearts and minds of all living beings on the planet[2]), Gravity Manipulation (Unaffected by the gravitational pull of the True Moon, which even the Lunar Whale couldn't escape from[2]), Spatial Manipulation, Deconstruction, and BFR (Can withstand the attacks of Atomos, who manipulates space[2], crush enemies down to a molecular level[3], and can warp them into another dimension[3]), Extreme Cold and Cosmic Radiations (Can fight and survive on the moon), Absolute Zero (Can survive Shiva's ice attacks[4], including Diamond Dust),

Speed: Massively Hypersonic (Able to dodge attacks made of lightning) | Sub-Relativistic (Should scale to Gilgamesh) | FTL+ (Kept pace with Ultimecia) | Massively FTL+ (Can keep up with the other Warriors of Materia)

Lifting Strength: At least Class M (Should be comparable to the Brothers GF while Junctioned) | Immeasurable (Is superior to Neo Exdeath and Enuo)

Striking Strength: Unknown (Doesn't generally attack with her fists, often preferring to use her Shooting Star) | Unknown | At least Multiversal+

Durability: Multi-Continent level (Is able to take hit's from Ifrit) | Multi-Solar System level (Should scale to slightly less than Eden) | Universe level+ (Can tank attacks from Ultimecia in all forms) | At least Multiverse level+ (Can keep up with the other Warriors of Materia)

Range: Dozens of meters with Shooting Star, much higher with magic.

Weaknesses: Junctioning Guardian Forces causes memory loss, has a limited stock of spells to use. Rinoa must be hard-pressed to use her Limit Breaks unless she has buffed herself with Aura. She has to manually decide between some of her resistances, although they can be changed when she wants them to. Changing her resistances or Junctioning an ability to her strikes locks it out from being used elsewhere (Can't have Death junctioned to his attacks and resistances at the same time as an example)

- Sorcery Powers: Rinoa's power is possibly the strongest out of all the Sorceresses in potential, although due to just having received them and her reservations about them, it is unknown whether they manifest to full power or not. Rinoa's strength lies in primal magic with no known alignment; evidence of this is shown by the effects of her Angel Wing Limit Break. However, Rinoa also received the powers of Adel, Edea and, through Edea, Ultimecia. Resulting in her also possessing talent in Time and Space spells, Ice spells, and other high damage spells.