VS Battles Wiki
Register
Don't have an account?
Sign In
Advertisement
in: Characters, Nasuverse, Fate,
and 42 more 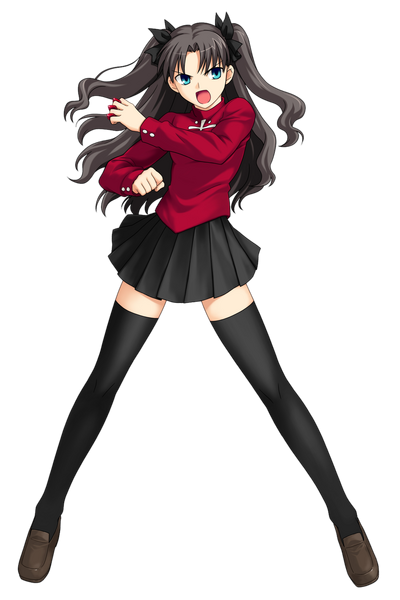 Rin Tohsaka is the master of Archer during the Fifth Holy Grail War and the successor to the Tohsaka family magecraft. When she was a child, her father was chosen as one of the Masters of the Fourth Holy Grail War and departed to fight in it, ultimately dying. With her mother left in a debilitated state, Rin was left in the care of her father's student, Kirei Kotomine, who completed her magical training.

With her father's legacy in mind, Rin spends the next ten years preparing for the Fifth Holy Grail War, planning on summoning the most powerful Servant, Saber. However, she is instead stuck with Archer after a minor mistake in the summoning. She has no wish for herself, only seeking victory.

Tier: 9-A, 6-C with Jewels and Preparation, Low 6-B with Jeweled Sword Zelretch

Attack Potency: Small Building level (Frequently engages in battles with her rival, Luviagelita Edelfelt, who can do this), Island level with Jewels and Preparation (Managed to take off one of Berserker's lives using four jewels and can barely counter Caster's magecraft), Small Country level with Jeweled Sword Zelretch (The Jeweled Sword Zelretch's output is comparable to Excalibur)

Speed: Subsonic with Massively Hypersonic Reactions (Can fight a casual Caster and shoot down some of her spells, and can take her off guard and defeat her in close combat when reinforced by magic)

Durability: Small Building level (Survived being thrown into the ground by Luvia this hard), Island level with Jewels and Preparation (Can withstand Berserker's strength by using up her jewels)

Stamina: High. Has access to an effectively limitless pool of mana with the Jeweled Sword Zelretch

Standard Equipment: Her jewels (20 in total, 10 after summoning Archer), The Jeweled Sword Zelretch

Intelligence: A recognized genius in both magecraft and school, Rin is one of the wisest characters in the series, restraining Shirou when his heroic tendencies get the better of him. She specializes in long-range combat, particularly the use of Gandr. She is skilled in her family's specialty magecraft, the use of Jewels as single-shot Mystic Codes powerful enough to counter Caster's A-Rank spells from the Age of Gods. She is also proficient in Bajiquan, allowing her to pummel Caster in close combat when utilized along with a basic Reinforcement spell. She can also match Luvia, an expert practitioner of Lancshire-style, in a one-on-one duel. However, she can be stubborn and hot-headed at times. Her meticulous plans tend to fail due to minor details she overlooks.

Weaknesses: Rin is overconfident, and she often disregards minor but essential details. Her most powerful spells require the sacrifice of one or more of her Jewels. Though her mana supply is virtually limitless with Jeweled Sword Zelretch, the recoil gradually damages her muscles. Her family's tradition of refusing to use modern conveniences has left her inept with technology. For example, she's having difficulty using anything more complicated than a traditional phone.

Magecraft: Rin is an incredibly skilled and talented magus who can manipulate all five Elements. She is particularly experienced in the conversion of power, in the transference and storage of magical energy. She stores her magical energy in jewels, making use of Jewel Magecraft, using them as single-shot Mystic Codes with magical power built up over the years. At the beginning of Fate/stay night, she has twenty jewels but uses up half of them summoning Archer. She can use the gems to counter the magic of even a Magus from the Age of Gods like Caster. By using four gems at once, she can penetrateBerserker's God Hand and take off one of his lives.

Her most common offensive spell is a curse known as Gandr, taking the form of a black orb fired from the tip of Rin's forefinger like a bullet. Due to her Magic Crest, Rin doesn't need to recite any incantation to use Gandr. She can fire many Gandr shots in quick succession and even set up a barrier to fire many at once as a rain of bullets. She is also competent in Reinforcement, using it to reinforce her body for bursts of speed and strength.

Rin in her school uniform

Rin in the Heaven's Feel epilogue