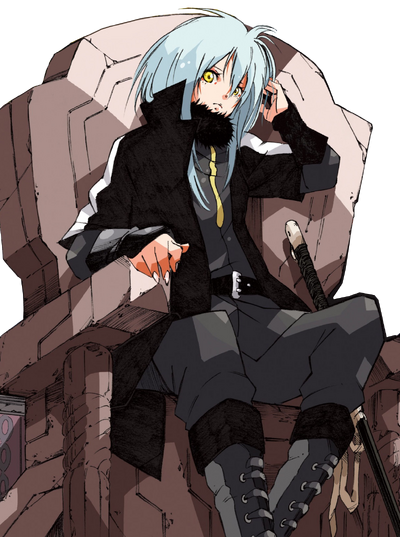 Rimuru Tempest, formerly known as Mikami Satoru, is the main protagonist of Tensei Shitara Slime Datta Ken. He is the founder and King of the Monster Country. Also known as the "Tempest of the Great Jura Forest," he is regarded as one of the strongest Demon Lords amongst the Mighty Eight Star Demon Lords as well as the only known Great Demon Lord. He is also a partner and best friend of True Dragon Veldora Tempest.

He is also known as Sensei to his former students.

Gender: Genderless (But identifies as a male)

Superhuman Physical Characteristics, Automatic Translation, Enhanced Senses and Extrasensory Perception (via Magic Perception, Heat Dectection, Supreme Olfaction, and Ultrasound Waves), Master Swordsman, Self-Sustenance (Types 1, 2 and 3; Rimuru is reborn as a slime that never gets tired and hungry. He doesn't need to breathe, eat and sleep), Dimensional Storage (via Stomach), Aura, Martial Arts, Magic, Small Size (Type 1 as a slime), Metal Manipulation and Thread Manipulation (With Sticky Steel Thread, Steel Thread, and Sticky Thread), Poison Manipulation, Natural Weaponry (With Full Amor Transformation which is the evolved form of Body Armor), Elemental Manipulation (Fire Manipulation, Water Manipulation, Ice Manipulation, Wind Manipulation, Electricity Manipulation, Plasma Manipulation, Hellfire Manipulation, Darkness Manipulation), Adhesive Manipulation (As a slime, he can become sticky; from this, Rimuru can used his body to trapped opponent), Immortality (Types 1 and 3; Rimuru is a semi-spiritual-lifeform. Can regenerate his body), Durability Negation and Intangibility (Can phase through a body's exterior and interact with a body's insides directly), Fusionism (Can transform 2 targets into a single one), Energy Manipulation, Statistics Amplification (Can increase his strength with a multitude of techniques, such as Herculean Strenght or <Fighting Spirit Technique>), Blessed (By Veldora Tempest. Has the Storm Dragon’s blessing), Telepathy, Creation (With Gluttony), Shapeshifting (Can shapeshift to anything he has consumed such as human, slime, black wolf, serpent, etc.), Inorganic Physiology (Type 1; his body is made of slime), Accelerated Development (Training, Intelligence, Physical Stats, Abilities), Forcefield Creation (Spatial Barrier), Regeneration (High-Mid; Can regenerate from a small piece of his body. his regeneration is comparable to Orc Disaster Gerudo's), Reactive Evolution (Can get resistance to what he analyzed as he did here where after absorbing Ifrit, he gained Fire Attack Resistance and here with poison. With proper context from Great Sage and his understanding, he can acquire skills. His skills can evolve in battle as it did against Orc Disaster Gerudo, with the support of Great Sage. He gained resistance to the  Holy Barrier effect because his magic was not nullified despited the first barrier doing so.), Healing, Memory Manipulation, Absorption (All Types), Power Mimicry (With Gluttony), Power Absorption (Can steal the abilities of others), Regeneration Negation (Up to High-Mid, with the use of black flame, could stop the Gerudo's regeneration), Weapon Creation, Duplication (Can clone himself), Summoning (Can summon demons and spirits), Teleportation, Flight (With Bat's Wings or Flight Magic), Corrosion Inducement (With Dissolve, Noxious Breath and Decomposition), Information Manipulation, Information Analysis (Can analyze and assesses his targets, from Great Sage. While his analysis used to be limited to Predation Rimuru, after getting Gluttony, can analyze with eyesight alone like Shuna with her Analytic ability), Analytical Prediction (Rimuru, with the use Great Sage, can predict make predictions of battle outcome), Explosion Manipulation (He can create explosion), Genius Intelligence, Sound Manipulation, Non-Physical Interaction, Law Manipulation (Can use Spirit Magic which rewrites physical laws), Soul Manipulation (With Heartless One, he can take the soul of anyone who begs for their life. Rimuru seized and absorbed the souls of 15 thousand soldiers he killed which is confirmed by Clayman; Clayman explained that a third party which in this case was Rimuru who absorbed the souls. For those he absorbed, he can take their souls as he did with Shizue's), Unholy Manipulation (Monsters are made of magic energy, which can be purified or warded off by holy energy), Radiation Manipulation and Creation (Monsters of significant aura can create an aura akin to radiation, that is extremely toxic to organic life and can induce death in high concentration. It will cause monsters to be born due to the high concentration of magic energy), Light Manipulation, Heat Manipulation, Danmaku (via Megiddo), From Intimidation skill: Sleep Manipulation and Fear Manipulation, Unconventional Resistance to Power Nullification, Power Modification, Power Absorption and Power Mimicry (Skills are inscribed into the soul which resists any outside interference unless the interference is stronger than the soul's defenses, furthermore Unique Skills and above require a strong soul to possess them), Resistance to: Physical Attacks, Death Manipulation, Possession (Can use Shapeshifter's division to remove possesion.), Disease Manipulation, Radiation Manipulation (Can resists the effect of Veldora's magical aura whose efffect is akin to radiation and quick death for most organic lifeforms and normal humans), Paralysis, Electricity Manipulation, Fire Manipulation, Ice Manipulation, Poisons, Corrosion Inducement, Pain Manipulation, Information Manipulation (Magic Perception overloads the brain with so much information it would have killed a normal human, but can be used casually), Data Manipulation (The information from Magic Perception is turned into data, which overloads the human brain, but can be used casually), Law Manipulation (Can resist the effect of Holy Barrier which affects the laws of the world), Memory Manipulation (Individuals surpassing A rank have high resistances, and their memories are protected by their soul), Magic (All monsters have inherent resistance to magic attribute), Soul Manipulation and Mind Manipulation (Has a strong soul which allowed him to cross the boundaries between worlds, and should somewhat resisted Yuuki's control like Hinata which can affect at 350,000 people)

All previous abilities plus Time Travel, Acausality (Type 3 with Multiple Existence Rimuru can share his consciousness simultaneously with multiple bodies. Each body is connected through the Soul Corridor which makes their memories transcend time and space and are accumulated within each other. Thus Rimuru can't die as long as his other bodies exist in imaginary space and another universe]), Camouflage, Information Manipulation, Supernatural Luck, Density Manipulation, BFR, Conceptual Manipulation (Type 3), Life Manipulation, Instinctive Reaction (with Observer), Statistics Reduction, Chain Manipulation, Weather Manipulation, and Self-Destruction, Cosmic Awareness (Ciel being able to observe the entire "world" to the point of being able to make a perfect copy despite being immobilized all the time). Resistance to Conceptual Manipulation (Type 3; Was unaffected by the destruction of the universe. The universe is destroyed as a result of a great spirit being born and erasing everything, life and death, and even the other great spirits whose birth gave rise to the existence of their respective element, for example, time never existed until the spirit of time was born)

Speed: Supersonic (Can move faster than the speed of sound), Relativistic reaction speed, Speed of Light attack speed with Megiddo (It is an ability which creates several hundred thousand floating water droplets similar to convex lenses, that receives sunlight and converge it into a thin line, and shoots the converge sunlight, was stated to be light speed) | At least Relativistic+ (Far superior to Leon), Speed of Light attack speed with Disintegration (Stated to move at 300,000 km/s), FTL with Melt Slash, with Massively FTL+ reaction speed (Because of Thought acceleration his thought processing capability is accelerated by a million to ten million times, which allows him to react to things he normally wouldn't be able to perceive) | At least FTL (Far superior to Chloe. Rimuru also evolves becoming even stronger every day) with Massively FTL+ reaction speed, and Massively FTL+ in Stopped Time (Can move a 1 million times normal speed while in stopped time) | Infinite (Superior to Veldanava who existed in nothingness, where neither time nor space existed. Ciel was able to use Rimuru's body and observe the end of the universe, and Rimuru existed in the End of Time and Space for countless years, where the flow of time was stopped, and the spread of space had ceased), Immeasurable with Time Warp (Can transcend time and space to reach the location he desires)

Lifting Strength: Unknown, Class 10 with Stick Steel Thread (Can endure the weight of over a 1000 tons) | Unknown | Stellar (Far superior to Velda who could lift his sword which had mass comparable to a star) | Unknown, Thrower can also bypass lifting strength requirement for anything graspable.

Stamina: Physically limitless, as a slime he doesn't get tired or need to sleep. Before his evolution into a True Dragon, Rimuru practically has infinite magical energy reserve due to him using Veldora's magical energy reserve. At some point, Rimuru himself evolve to become the same kind of being as Veldora (a True Dragon). By the end of the series, he has the mana breeder reactor which gives him an inexhaustible source of mana.

Intelligence: Extraordinary Genius (Rimuru can estimate the chances of him succeeding at any task, and record and accurately copy the contents of entire books to his mind within seconds. These books would take even experts of magic lifetimes to learn. Hence, his knowledge in the field of magic and magic science surpassed expert and Rimuru is one of the smartest characters in his world. He understood the concept of Ghost Researcher golem, a complicated Golem built with spirit magic, works physically which is something that the best of mind of Dwarfs and the elves couldn't do and had to give up on the project that was solved by fairies and Ramiris. Rimuru was able to make a much better improvement to Golem's concept with his creation that served as a basis for Beretta's body where his methodology far outclassed what was made by the fairies. Rimuru did calculate with the help of Great Sage all the light positions requirements for Megiddo's attack that required processing several hundred thousand floating water droplets as one of the main variables he uses for his attack. From the creation of Megiddo, Rimuru created a new field of magic called physic magic. The calculations and creation were under extreme pressure. Great Sage can predict the future from calculations alone.) | Extraordinary Genius (Can create devices which purify magical energy using spirits, create devices which prevent mind control, calculate the future attacks of his opponents, run 10,000 calculations to predict who would win in a fight, calculate the accurate method of reviving 700,000 people, identifying each individual, sorting through and picking from their genetic and spiritual data, almost instantly) | Supergenius (The calculation speed and other things of Ciel are superior to Raphael which previously gave Rimuru Extraordinary intelligence. With Ciel, Rimuru can even hide the voice of the world, the system which governs several parallel worlds and is capable of recreating turn null the primordial energy which created the world) | Nigh-Omniscient (Can create the entire world, nearly identical to what it had been before)

Wisdom King Raphael: An evolution of the Great Sage Unique Skill. It confers the following abilities:

Storm King Veldora: An ultimate skill acquired after Rimuru analyzed Veldora which has the following effects:

Covenant King Uriel: An ultimate skill Rimuru acquired after evolving and analyzing the hero's infinite prison, it has the following sub-skills:

Manas: Ciel (Wisdom God's Core): The core of Wisdom Lord Raphael that gained individuality, personality, and will after being named by Rimuru. Although not classified as an Ultimate Skill, she (Rimuru refers to Ciel as a female) possesses improved abilities compared to her old self. Ciel's power revolves around in-depth analysis, learning, and problem-solving skill, and overall utility at using spells to its utmost efficiency. Her subskills are the following:

Evil Dragon Lord Azi Dahaka: An Ultimate Skill that originally belonged to Vega that was inherited by Zero and was later obtained by Rimuru. This Ultimate Skill power revolves around manipulating organic matter and creating clones. Its sub-skills are the following:

Shulk (Xenoblade) Shulk's Profile (Both were 2-B. Speed was Equalized)