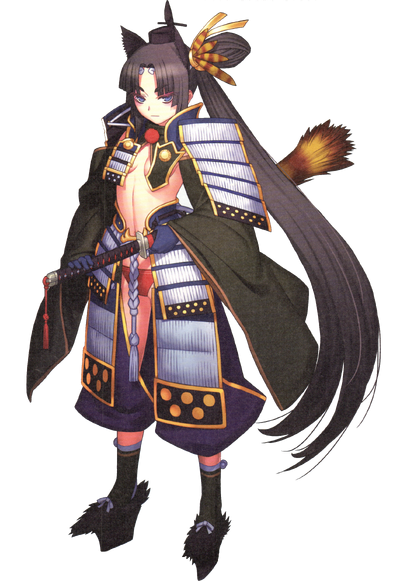 Rider is a Rider-class Servant able to be summoned by Ritsuka Fujimaru in the Grand Orders of Fate/Grand Order.

Rider's True Name is Ushiwakamaru, who is more better known by her adult name as Minamoto no Yoshitsune. She was known as one of, if not, the most famous commander in Japanese Military history, whose popularity could only be rivaled by the likes of Oda Nobunaga. Although it was said that there were many points in her early years in life that were obscure, especially prior to her raising an army, she lead a life during her military career as a tragic commander who, while leading with charisma and said to be a battle genius in her time, died following her retreat and battle in Oshu with her brother Yoritomo.

Age: 29/30 at the time of her real-life death (Is summoned in the form before she became Minamoto no Yoshitsune)

Powers and Abilities: Superhuman Physical Characteristics, Master Swordswoman, Social Influencing and minor Mind Manipulation with Charisma, Sound Manipulation with Hoemaru, Teleportation (Can reduce the distance to her target with Shukuchi. Can forcibly relocate everyone in her general vicinity and put her allies in advantageous positions and her enemies put in disadvantageous positions via Eye of Shiva), Invisibility and Stealth Mastery (Has Presence Concealment on the level of a Assassin Servant), can "ride" any vehicle or mount with supernatural skill, Animal Manipulation, Limited Power Nullification, Servant Physiology, Creation (Can create an imitation of her retainer Benkei to take attacks for her), Supernatural Luck, Minor Fate Manipulation (Servants with B-rank Luck or higher can change their own fates to evade inevitable outcomes such as having their hearts destroyed by Gáe Bolg), Resistance to BFR | All previous, Regeneration (Low-High. As long as a strand of hair exists, she will regenerate), Immortality (Type 8. Her Spirit Origin is mixed with Tiamat's Chaos Tide and she will live as long as it exists), Duplication (Can create a overwhealming amount of clones)

Attack Potency: Small City level (Although she possesses a D rank in strength, she should still be comparable to other combat ready servants at Chaldea, and thus should at least be as powerful than a much more recent Servant like Archer. Participated in the fight against Ushi Gozen), higher with Jumping the Eight Ships at Dan-no-ura (A C-rank Noble Phantasm attack, which would make it equal to A-rank attacks) | Small City level (Much stronger tham before. Can fight Shielder, Ishtar and Benkei at the same time), higher with Jumping the Eight Ships at Dan-no-ura

Speed: Massively Hypersonic (Boasts an A+ rank in agility, making her one of the fastest servants and able to easily keep up with most combat-ready servants.)

Stamina: Virtually tireless provided she is given sufficient amounts of prana

Intelligence: Known for her exploits as a genius military commander, Ushiwakamaru was considered a monster during her life as the famous Minamoto no Yoshitsune due to having lead many others into battle throughout her military career and winning many battles. In addition she was also a competent and skilled swordswoman, having been able to fight against the likes of Benkei, who before was said in legend to have fought and defeated 999 warriors before he himself was defeated by Ushiwakamaru. But outside of combat, she was said to have not known the hearts of others; having only nurture her fighting spirit but not of her “humanity” as well as only fighting for her lord and not for herself, causing her to eventually be chased by her brother and being lead to her death along with her many retainers.

Shana-oh's Wandering Tales: The Noble Phantasm of Ushikwakamaru. The embodiment of numerous legends that were born after she became known by her later name as Minamoto no Yoshitsune and traveled to Oshu in her lifetime, manifesting in the form of five special techniques:

Retrieved from "https://vsbattles.fandom.com/wiki/Rider_(Ushiwakamaru)?oldid=6998807"
Community content is available under CC-BY-SA unless otherwise noted.