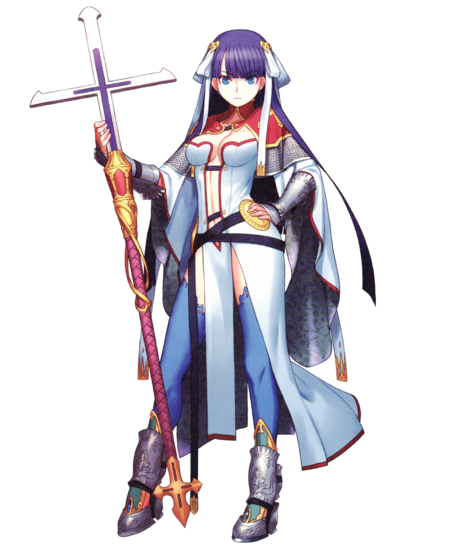 Rider is a Rider-class Servant able to be summoned by Ritsuka Fujimaru in the Grand Orders, first appearing as one of the Servants summoned by Gilles de Rais in a berserk state during the Orleans singularity.

Her true name is Martha, best known as the saint who tamed the monstrous dragon Tarasque. First appearing as a figure in the Bible, she witnessed the Messiah's resurrection of her brother, Lazarus, and became a woman of unshakable faith, though she never quite got over her town girl origins, retaining something of a short temper.

Powers and Abilities: Superhuman Physical Characteristics, Can increase her power when near a waterside, Martial Arts, Magic, Curse Manipulation (Can inflict curses that prevent wounds from healing even with magical treatment), Explosion Manipulation, Animal Manipulation, can "ride" any vehicle or mount with supernatural skill, can make the impossible possible, Summoning (Can summon Tarasque), Supernatural Luck, Minor Fate Manipulation (Servants with B-rank Luck or higher can change their own fates to evade inevitable outcomes such as having their hearts destroyed by Gáe Bolg), Limited Power Nullification, Servant Physiology, Resistance to BFR and Madness Manipulation (during the France singularity, she was able to maintain her mind despite being afflicted with Madness Enhancement)

Attack Potency: Island level (As a combat-ready Servant, she should be at least comparable to Archer, and she can fight against other Servants with her bare fists, proving capable of even wounding dragons.), Small Country level with Tarasque (It should be comparable to other exceptionally strong Dragons like Fafnir)

Speed: Massively Hypersonic (Can keep up with other Servants in combat)

Durability: Island level, Small Country level with Tarasque (When used defensively, Tarasque's shell can be used to completely protect Martha or her ally from harm)

Stamina: High (Servants can fight for an entire day without tiring and continue fighting for as long as they have sufficient mana) Range: Standard melee range, tens of meters with magecraft

Intelligence: Martha is, on the inside and outside, a holy, perfect woman with an indomitable spirit and faith. Her legendary skill in Riding allows her to ride even the Dragon Kind and tame even the greatest, most monstrous of all beasts with ease.

Tarasque: O' Tragic Drake Who Knew Naught of Love: Martha's primary Noble Phantasm, which allows her to summon the monstrous dragon Tarasque, who she tamed after it fell in love with her for her perfect, holy radiance. The Tarasque is an immense, tyrannical dragon capable of annihilating an enemy and their camp in a single attack. It can move in both the water and on the ground with equal ease, has a tail covered in venomous spikes, and can breathe gouts of blazing fire.

Tarasque: O’ Dragon’s Shield that Shall Not Let a Blade Pass: A protective Noble Phantasm, in which Martha summons the shell of the dragon Tarasque to temporarily protect herself and her allies from attack, drastically increasing her target's defensive power and nullifying most physical damage before it fades.

Magic Resistance: An innate ability that grants protection against magical effects. Unlike the Resistance effect, which merely rejects Magical Energy, this ability cancels the spells altogether. At this rank of A, Martha is immune to all but the strongest, oldest spells of the Age of Gods, rendering her nearly completely untouchable to modern magi.

Riding: The class skill of Rider and Saber class Servants, allowing them to ride mounts and vehicles with incredible skill. With a stellar, unparalleled rank of A++, Martha can ride all beasts and vehicles with complete, masterful control, bringing their capabilities up to a supernatural scale. While the Riding skill would not normally allow a Servant to ride members of the Dragon Kind, Martha is a special case and can ride even dragons masterfully.

Divinity: The measure of one's Divine Spirit aptitude, reflected in high ranks by the user becoming part Divine Spirit. At A-rank, it is even an indicator as one who has reached the Throne of Gods. Additionally, it possesses another effect that allows one to reduce "Anti-Purge defense" in proportion to the rank of their Divinity, allowing them to break through defensive abilities such as Protection of the Faith and Saver's Enlightenment of the Sacred Fig. Martha gained her C-rank from her tales of journeying with the great Messiah and taming the dragon Tarasque, becoming worshiped and revered as a saint.

Miracle: The ability to occasionally realize a miracle that makes the impossible possible, similarly to but different from the skill born by legendary pioneers, Pioneer of the Stars.

Saint of the Waterside: As a saint, Martha is heavily associated with the water due to her legend of riding across the water on a boat and reining in the Tarasque on a riverbank. When she is within view of a waterside, Martha becomes more powerful. 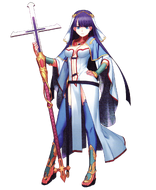 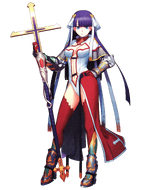