VS Battles Wiki
Register
Don't have an account?
Sign In
Advertisement
in: Characters, Nasuverse, Fate,
and 37 more 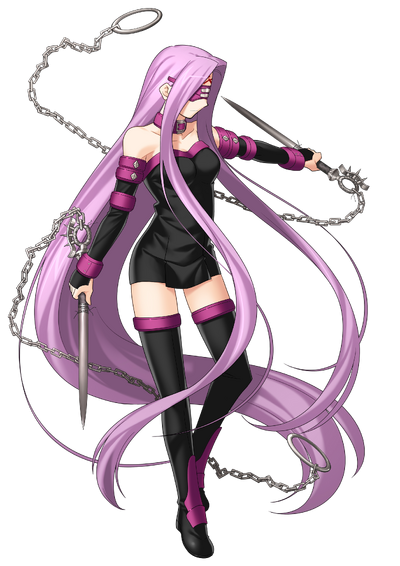 Rider is the Rider-class Servant of Sakura Matou during the Fifth Holy Grail War, though, due to Sakura's unwillingness to participate in the conflict, she acts primarily as her brother Shinji's Servant.

Her True Name is Medusa, the Gorgon of Greek Mythology, cursed by the goddess Athena to be a monster. She was originally an Earth Goddess, living on the Shapeless Isle with her sisters, Stheno and Euryale, even having once shared the same existence and nature as them. As she protected her island and sisters from the humans that came to kill them, she slowly grew into the monstrous Gorgon and consumed them before finally being killed off by the legendary hero Perseus.

Powers and Abilities: Superhuman Physical Characteristics, Weapon Mastery, Chain Manipulation (Can magically enhance the length of her chains), Enhanced Senses (Her non-sight senses are much more precise and potent than her sight, allowing her to act normally when blinded by Breaker Gorgon), Absorption with Blood Fort Andromeda (Breaks down everyone in the range into a bloody slurry, releasing their magical energy, which Rider and her Master absorb), Duplication (During Stheno's interlude Medusa is able to duplicate herself six times), Soul Manipulation, Conceptual Manipulation, Information Manipulation, limited Mind Manipulation and Memory Manipulation (Blood Fort Andromeda allows Rider to harvest and consume multiple souls at once, being a conceptual field), Illusion Creation with Breaker Gorgon, Curse of Petrification, can summon Pegasus, Flight with Pegasus, Sealing, Power Nullification and Statistics Reduction via Reality Warping (Breaker Gorgon can be used to seal the opponent in a mental "World" where they lack all supernatural qualities they had in the real world, including supernatural strength), Animal Manipulation and Vehicular Mastery (Can "ride" any vehicle or mount phenomenally), Statistics Amplification (Can increase her physical strength with her Monstrous Strength skill) and Servant Physiology

Attack Potency: Island level (Though outmatched, she was able to put up a fight against and trade blows with Saber), Island level+ with Bellerophon (Though it was instantly destroyed by Excalibur, even if much weaker than before, it should still be superior to other A Rank Noble Phantasms). Can ignore conventional durability with Cybele and Blood Fort Andromeda | Island level (Stronger than before, she briefly matched Saber Alter when using all of her energy and the Mystic Eyes), Small Country level with Bellerophon (Was able to match and eventually overpower Excalibur Morgan with help from Shirou's Rho Aias at the cost of losing ninety percent of its own light, but ultimately stands no chance against it otherwise. As an A+ Rank Noble Phantasm, it should be comparable to Siegfried's A+ Rank Noble Phantasm). Can ignore conventional durability with Cybele and Blood Fort Andromeda

Speed: Massively Hypersonic (One of the fastest Servants in the Fifth Holy Grail War alongside Lancer, surpassing him in average speed. Outpaced Saber and easily ran circles around Saber Alter and attacking her from all directions)

Lifting Strength: Class K (Comparable to Martha who stopped a speeding train, Achilles who stopped a rolling 300 ton jumbo jet, and Asterios who swam carrying the 100-150 ton Golden Hind galleon ship while injured) | Class K (Stronger than when she is using Monstrous Strength under Shinji. Stabbed and swung Cursed Arm Hassan around in a room with her chains)

Stamina: High (Can fight off Saber Alter for some time using all her power for ten minutes despite stating it would have taken only two minutes, and had enough energy to activate her Noble Phantasm shortly after)

Range: Extended melee range, Hundreds of Meters with her nail daggers, further with her Mystic Eyes, and much further with Bellerophon

Standard Equipment: A pair of nail daggers that she can magically change the length of, Breaker Gorgon, and Bellerophon.

Intelligence: Being a former earth goddess, Rider has an impressive number of skills and Noble Phantasms, even for someone of her class. She favors low-risk, high reward tactics (i.e., Hit and Run and Guerrilla Warfare) regardless of the means and will harm innocents if it means reaching her goal and protecting Sakura. She can be somewhat overconfident at times (which gets her killed in Unlimited Blade Works) but is skillful enough to clash with any of the other Servants and simply ran circles around Saber Alter rather than fight her directly.

Weaknesses: Blood Fort Andromeda takes time to set up, requiring over ten days to be utilized at its full power. Using Bellerophon or Cybele takes a tremendous toll on Rider, and she thus prefers to avoid doing so if possible. Overusing her Monstrous Strength skill will eventually turn her back into the Gorgon. 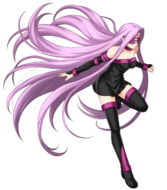 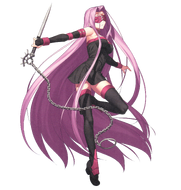