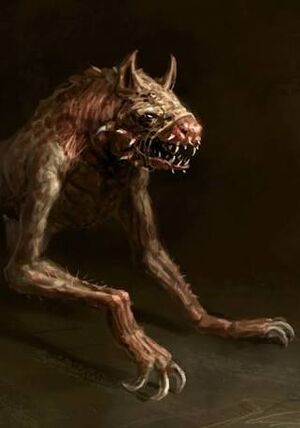 The ridderak is a powerful Valg-beast summoned by Cain during the Throne of Glass novel using the piece of Wyrdstone given to him by the King of Ardarlan. In an attempt to win the contest and become the King's Champion, Cain summoned the ridderak in order to kill dangerous contestants and steal their power. Fast, ferocious and powerful, the ridderak was too powerful for most of the contestants, killing most with stealthy and brutal attacks.

However, Cain's scheme was uncovered by Celaena Sardothien as she explored the caves under the Ardarlan castle. Cain locked her in a room with the creature, but despite the ridderak's best efforts, Celeana was able to outmaneuver it for long enough to kill it with Damaris.

Name: None, species is known as a ridderak

Powers and Abilities: Superhuman Physical Characteristics, Stealth Mastery (Tracked trained warriors and assassins without being noticed), Pressure Points (Shows knowledge of human biology enough to cripple people with a single claw strike), Power Absorption (Absorbs the power of those that it kills, whether this be physical power or magical abilities) and Darkness Manipulation (When the ridderak appeared, shadows gathered around it and the room became noticeably darker. It is unknown if making contact with these shadows has the same draining effect that other Valg shadows do)

Attack Potency: Wall level+ (Obliterated a large wooden door, it was hinted that the ridderak could be much more powerful if it was able to consume a powerful being like a Fae or witch)

Intelligence: Average. Which possessing animalistic reasoning skills, the ridderak has a reasonable knowledge of human biologies, such as knowing to severe the tendons in the legs to prevent a person from running. It also recognized the danger that Damaris posed to its health and was able to successfully plan methods of attack against powerful foes

Weaknesses: Is rather clumsy in tight spaces. Like all Valg, it has a weakness of light

Retrieved from "https://vsbattles.fandom.com/wiki/Ridderak?oldid=5033011"
Community content is available under CC-BY-SA unless otherwise noted.